We’ve recently worked with Braswell Memorial Library (Rocky Mount, N.C.) to digitize oral histories, written stories, and a manuscript all created for the book Flooded: Reflections of Hurricane Floyd. Compiled by the Friends of Braswell Library, Flooded represents the culmination of an effort to document what happened in Nash and Edgecombe counties twenty years ago today. On September 16, 1999 Hurricane Floyd hit North Carolina and caused catastrophic flooding throughout the eastern part of the state. Fatalities, displaced families, and property loss marked its passing.

The collection includes interviews with and stories from firefighters and other emergency personnel, city officials, and residents. Many of the interviews include both audio and a transcript. You will also find the original copies of stories included within Flooded, as well as a pre-print version of the book. Chia Yang displaying a pillow during an oral history interview.

Throughout the spring and summer of 2018, several Hmong community members came forward and volunteered their stories in order to preserve the story of how they came to Catawba County and North Carolina. The people interviewed often tell their life stories, how they came to the United States, and how they are involved in the local Hmong community. Many also include their experiences during the Vietnam War.

Please note that many of these oral histories are not in English. However, transcriptions in English are available to download. First, navigate to the bottom of the video’s page, then click the “Download” button, then “Download” under “Action”.

Having these oral histories digitized on DigitalNC represents an important part of our understanding of Catawba County and its residents. To see other materials from the Catawba County Library, visit their partner page or check out their website. To learn more about Hmong Keeb Kwm: The Hmong Heritage Project, please take a look at the exhibit page. A partial map of the Mill Villages found in Massey Hill.

Over 120 new photos, news clippings, artifacts, and oral interviews have been digitized and added to DigitalNC, courtesy of the Arts Council of Fayetteville, as part of the Massey Hill Heritage Discovery Project. This project was designed to trace the history of the Massey Hill neighborhood in Fayetteville dating back into the 19th century. Located between Camden Road and Gillespie Street along Southern Avenue, Massey Hill is a neighborhood that grew up alongside the three local textile mills and inspired feelings of family and community among its long-time residents, many of whom lived their whole lives in Massey Hill. A photo of the Tolar-Hart Mill Water Tower in Fayetteville.

There is a ton of variety in this batch, giving us a vibrant image of what it was like to live and grow up in Massey Hill. Dozens of photos are included, with many highlighting life in the mills, events and celebrations that were held for holidays, and pictures of local schools and schoolchildren. A number of newspaper clippings are also found in this batch, detailing many different parts of life in Massey Hill, including interviews with local residents. One resident, Ida Belle Dallas Parker, also wrote several short stories reminiscing on her childhood and family history in Massey Hill. Finally, a number of oral histories from Massey Hill residents are included – they also discuss their personal histories growing up in Massey Hill, how they feel about the neighborhood, and what it meant to them.

Having these materials on DigitalNC is an important reminder of how we build communities in our lives and what they mean to the people who live there. To browse through other materials from the Arts Council of Fayetteville, check out their partner page or take a look at their website. Nao Chao Lo and Nhia Thong Yang in their military uniforms, circa 2018

Over a hundred photographs, documents, artifacts, oral histories, and other materials from Hmong Keeb Kwm: The Hmong Heritage Project are now online, courtesy of the Catawba County Library. This new batch represents the first materials on DigitalNC to come from the Catawba County Library. This collection also has the honor of being the first to represent the Hmong people of North Carolina on our website.

There is a huge amount of variety in the materials in this batch. It contains dozens of photographs of physical objects to DigitalNC, including colorful embroidered material, Laotian and Thai currency, bracelets and jewelry, and more. Text materials, like personal records, newspaper clippings, and program certificates are also included. A number of photographs of Hmong individuals, their family members, and their personal lives are also found in this collection. Finally, several oral histories are also included in this collection, allowing people to tell about their experience of coming to the United States. These oral histories are both available as audio files and as written transcripts.

Having these materials on DigitalNC represents an important addition to our understanding of Catawba County, and allows us to continue in our mission to digitize materials from all communities throughout the state. To see other materials from the Catawba County Library, visit their partner page or check out their website. 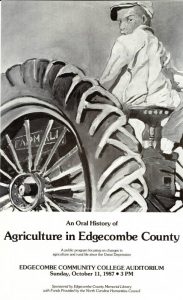 The cover of the Agriculture in Edgecombe County event program

New materials from Edgecombe County Memorial Library are now online and include additions to the M.S. Brown Photography Collection as well as sound clips, transcripts, and photographs from the Oral History of Agriculture in Edgecombe County project.

The Oral History of Agriculture in Edgecombe County project was completed in 1987 and is comprised of interviews from farmers and those who worked in farm-related industries in Edgecombe County. This project culminated in a live event held at the Edgecombe Community College Auditorium on October 11, 1987 that included a lecture and discussion about topics covered in the oral history interviews. The event program reads, “the interviews vividly tell the story of how the country’s farmers, farm women, merchants, manufacturers, and extension agents helped shape farm life during a period of time characterized by involvement of the federal government, mechanization, the growth in size of farms, the decline of tenancy, and the loss of farm-related jobs.” The original cassette tapes containing the interviews have been digitized and transcripts are available for many of the interviews. These oral histories give a wonderful glimpse into the daily life of farmers in Edgecombe County, and speak to how farm life changed from the Depression-era through the late 1980’s.

Additions to the M.S. Brown Collection include more images of school life, events and parades, and houses and businesses in Edgecombe County, all taken by Tarboro citizen M.S. Brown.

To view these materials visit the links below:

To see more materials from Edgecombe County Memorial Library, visit their partner page or take a look at their website. 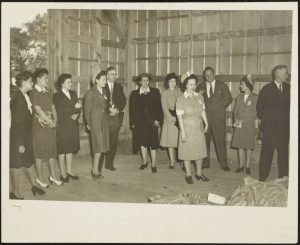 A photograph from the M.S. Brown collection showing people at the Tarboro tobacco market.

Here at the Digital Heritage Center, we’re able to scan or photograph almost all kinds of two dimensional items and even a goodly number of those in three dimensions. However, audiovisual materials are sent off site for digitization to a vendor and, as such, it’s a service we’ve only been able to offer annually. We just concluded our second round of audiovisual digitization and, like last year, our partners came forward with a wide variety of film and audio nominations documenting North Carolina’s history. This is the first in a series of posts about the accepted nominations, with links to the items in the Sights and Sounds collection. 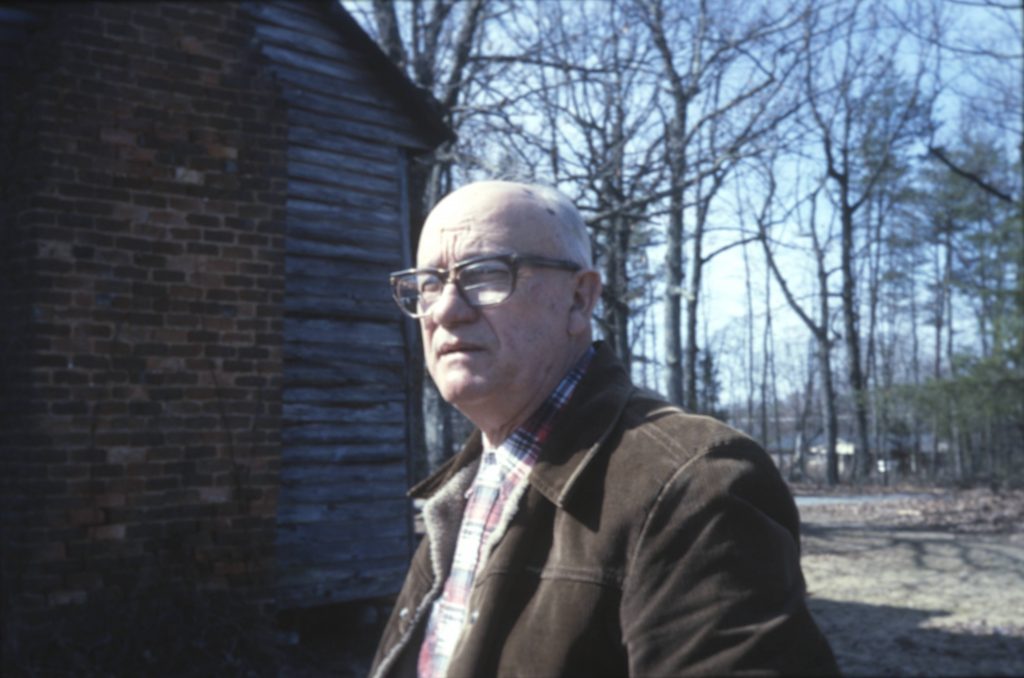 Unidentified man, presumably from Gaston County and interviewed for the Crafted with Pride Project in 1985.

The “Crafted with Pride” project, led by several cultural heritage institutions and businesses in Gaston County in 1985, sought to record and bring public awareness to the textile industry’s impact in Gaston County. During the project, a number of oral histories were collected from those who had worked in textile mills and lived in mill villages in towns like Belmont, Bessemer City, Cherryville, Dallas, Gastonia, High Shoals, McAdenville, Mount Holly, and Stanley. Belmont Abbey College has shared these oral histories on DigitalNC, as well as images and documents from the project. The oral histories touch on the toil of mill work, especially during the Great Depression, and the positive and negative cultural and social aspects of mill villages in North Carolina during the early 20th century. 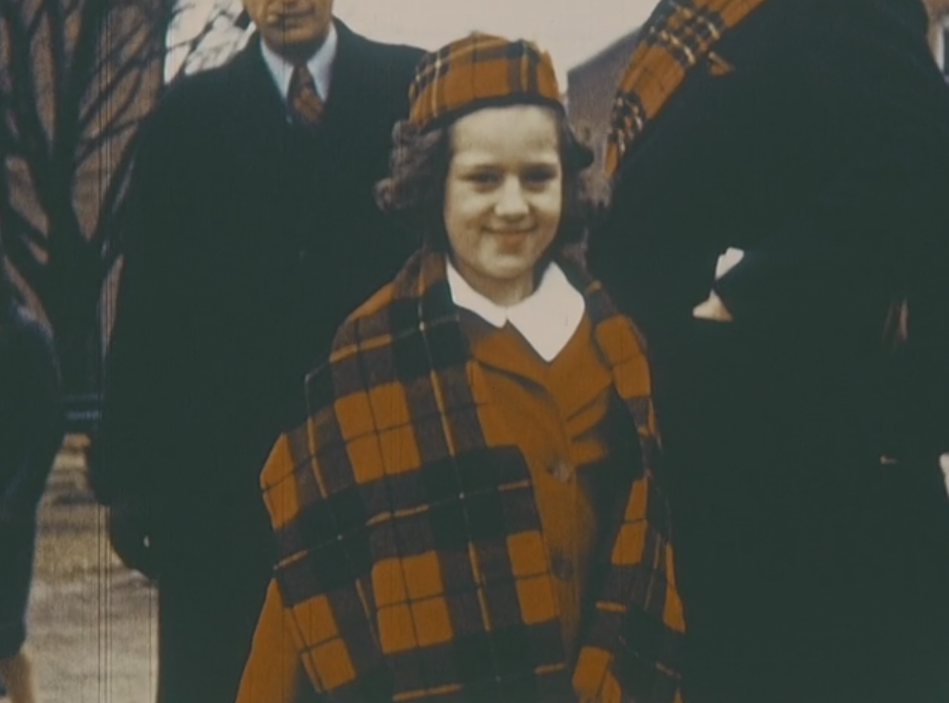 Silent footage of the 1939 sesquicentennial parade in Fayetteville, N.C. combines Scottish customs, local history, and military displays from Cumberland County. This film was nominated by the Cumberland County Public Library, along with a brief advertisement soliciting support for renovation of Fayetteville’s Market House. 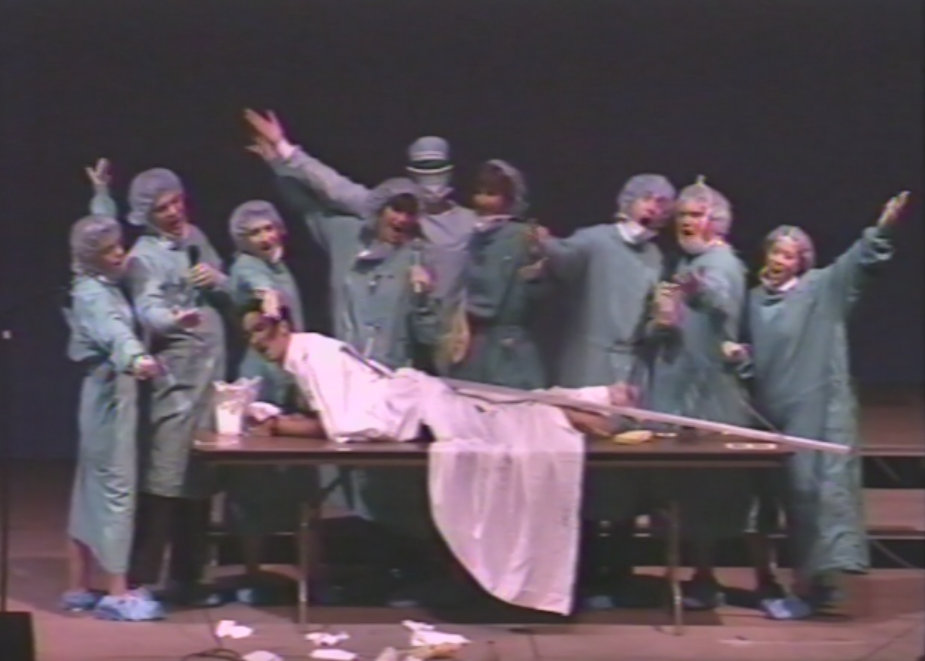 Scene from “The Sound of Mucus,” performed by Duke Medical School students in 1989.

The films and oral histories nominated by the Duke University Medical Center Archives describe the history of Duke Hospital and Duke University’s School of Medicine. Included is a Black History Month Lecture by Dr. Charles Johnson, the first black professor at Duke Medicine, in which he describes his early life and his work at Duke. You can also view “The Sound of Mucus,” a comedic musical created and performed by Duke Medical students and faculty in 1989.  Two interviews conducted with Wilburt Cornell Davison and Jane Elchlepp give first hand accounts of Duke Hospital and Medical School history.

We’ll be posting several more blog posts in the coming weeks which will introduce the other films from our partners now viewable on DigitalNC.