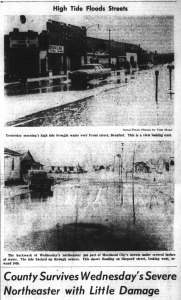 Sometimes, it’s easy to feel like the problems of today are unique to our time and place, but this latest batch of the Carteret County News-Times (1960-1963) demonstrates that people have been working through similar problems for at least 50 years. One issue, from March 16, 1962, somehow touches on big storms flooding the area (and the difficulty of insuring coastal property), U.S. House elections, and redistricting—almost as if it were printed in 2022.

Luckily, no one died in the nor’easter that hit Morehead City and the rest of the coast in March 1962, but the storm did cause quite a bit of damage. A paper from the preceding week (March 2, 1962) pictures flooding along some of the commercial streets and describes buildings that were not up to code to withstand the storm. One commissioner reported that an insurance firm in New York abstained from insuring the area because of the building code problems. A week later, a headline reads (perhaps unsurprisingly): “Red Cross Says Best Way to Help Dare Is Give to Local Red Cross.”

Another front page story describes a bid for the 3rd Congressional District by Morehead City resident S.A. Chalk Jr. Chalk Jr. ran against incumbent David Henderson in the Democratic primary (though in a much different Democratic party than we think of today). He accused Henderson of voting for “policies that are bound to cause even further trouble,” saying, “He claims he’s conservative, but his voting records do not bear this out.” Chalk Jr. still lost the primary, apparently, as Henderson went on to represent the district until 1977.

Aside from the familiar arguments of House elections, the article also mentions that Harnett County was added to the district in 1960. And while the headlines haven’t changed much over the last 50 years, the list of counties included in the 3rd District certainly has. In 1962, the district included 10 counties: Carteret, Craven, Duplin, Harnett, Jones, Onslow, Pamlico, Pender, Sampson, and Wayne. In 2023, the district will expand and morph to contain parts of 15 counties: Beaufort, Camden, Carteret, Craven, Currituck, Dare, Duplin, Hyde, Jones, Lenoir, Onslow, Pamlico, Pitt (partly), Sampson, and Wayne (partly). For visual thinkers, an interactive map of NC’s congressional districts can be found here.

You can see the full batch of the Carteret County News-Times here and explore all of our digital newspapers in our North Carolina Newspapers collection. You can also explore more materials from the Carteret County Public Libraries on their partner page and their website. 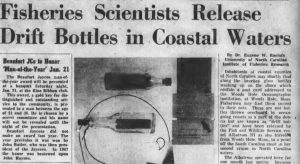 The following microfilmed newspapers were selected for digitization in 2017-2018. Thanks to supplemental funding from the State Library of North Carolina, we were able to complete more reels than in previous years. Reels were chosen from nominations according to our Criteria for Selecting Newspapers to Digitize from Microfilm. 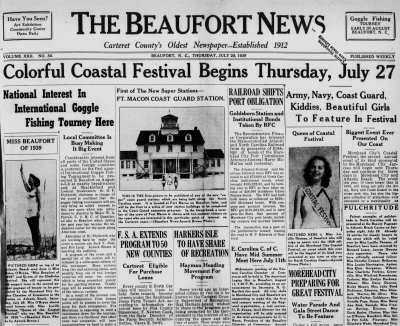 This front page of the July 20, 1939 issue of The Beaufort News announces the first annual Coastal Festival.

Thanks to nominations from the Carteret County Public Libraries, we’ve extended our community newspaper coverage in southeast North Carolina and the Inner Banks with two new titles:

These papers really increase the representation of eastern North Carolina on DigitalNC. To view more papers from points east (or elsewhere), head over to our Newspapers collection page.