This week we have another 40 titles up on DigitalNC! In this batch we have special editions of Morganton’s The News-Herald that detail the destruction caused to Western North Carolina by “The Great Flood of 1916.”

In July of 1916, two hurricanes hit Western Carolina within a week of each other. The first one came from the Gulf Coast and stalled over the region from the 8th until the 10th, and the second made landfall in South Carolina, reached the mountains on the 15th, and dumped an astounding 22 inches of rain in a 24 hour period. 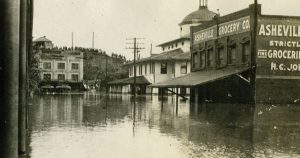 After the storms had passed, the Swannanoa River was a mile wide, the French Broad was four times its normal width, there were over 300 landslides, and the town of Hendersonville was surrounded by a lake. At least 80 people died in the flooding, but since so many people lived in rural areas, the exact number is unknown.