This week we have another 34 titles up on DigitalNC! While this batch focuses heavily on newspapers from Hendersonville, Goldsboro, and Greensboro, it also includes Fayetteville, Henderson, Albemarle, Clinton, Burlington, and our first addition from Bush Hill. Bush Hill (renamed Archdale in 1886) was home to the Annie Florence Petty, who was the first professionally educated and trained librarian in the state of North Carolina. Petty (born 1871) was a founding member of the North Carolina Library Association and, in keeping with her Quaker upbringing, she was also the first secretary of the North Carolina Friends Historical Society. After her prosperous, four-decade long career building the library at the North Carolina State Normal and Industrial School (now the University of North Carolina at Greensboro) and other libraries across the state, she retired in 1933 and moved into the family home she shared with her equally successful, chemist sister, Mary Petty. 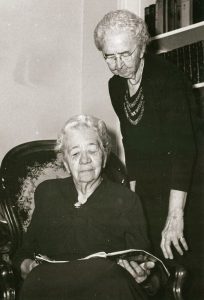 Mary (left) and Annie Petty in 1952. Image via uncghistory.blogspot.com