This week we have the final 35 newspaper titles for this project up on DigitalNC! Over the past 11 months we have uploaded over 2.4 million pages of North Carolina newspapers – bringing our total number of newspaper pages on DigitalNC to 4,175,076 and our total number of titles on DigitalNC to 1,161 – all freely available to anyone! In this closing batch we have our first paper from Bower, North Carolina (which you may know as Clemmons today) and an article in the Union Republican about Stokes County’s would be Wright brother: Jacob A. Hill. 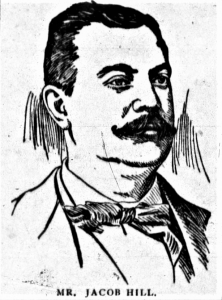 Before Orville and Wilbur’s iconic first flight in 1903, the race to create a manned flying machine was fiercely competitive. One of the contenders was a man from Vade Mecum Springs named Jacob Hill. Hill was born 1862 in Davie County and had been fascinated by the flight of birds ever since he was a child. In 1901 he decided to take that curiosity a little further and solve “the problem of aerial navigation” by building his own dirigible. 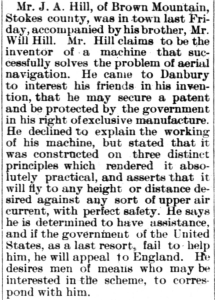 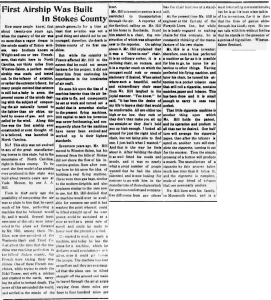 Mr. Hill’s machine could have been the first piloted aircraft, but we’ll never know for sure if it could actually fly and be controlled. Momentum ran out when Hill couldn’t secure funding for his invention. According to Thomas Parramore’s First to Fly, witnesses claimed the craft could get off the ground, but couldn’t do much more than hover in place. Even though Hill’s airship became something of a local joke for a time, the legacy of his wild aspirations continues to live on in North Carolina history. 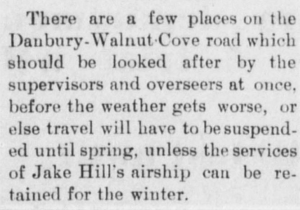 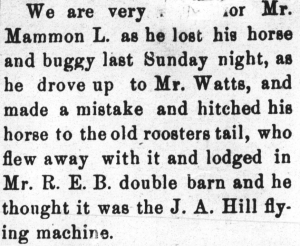 Over the past year, we’ve added millions of newspaper images to DigitalNC. These images were originally digitized a number of years ago in a partnership with Newspapers.com. That project focused on scanning microfilmed papers published before 1923 held by the North Carolina Collection in Wilson Special Collections Library. While you can currently search all of those pre-1923 issues on Newspapers.com, we have made them available in our newspaper database as well. This will allow you to search that content alongside the 2 million pages already on our site – all completely open access and free to use.

Back in August, we announced our annual call for microfilmed newspaper digitization. We asked institutions throughout North Carolina to nominate papers they’d like to see added to DigitalNC. As it is every year, it was an incredibly tough choice – we are typically able to choose between 40-60 reels out of over 300+ nominated. This year we’ve chosen the following titles and years.

We hope to have these titles coming online in the first half of 2022. 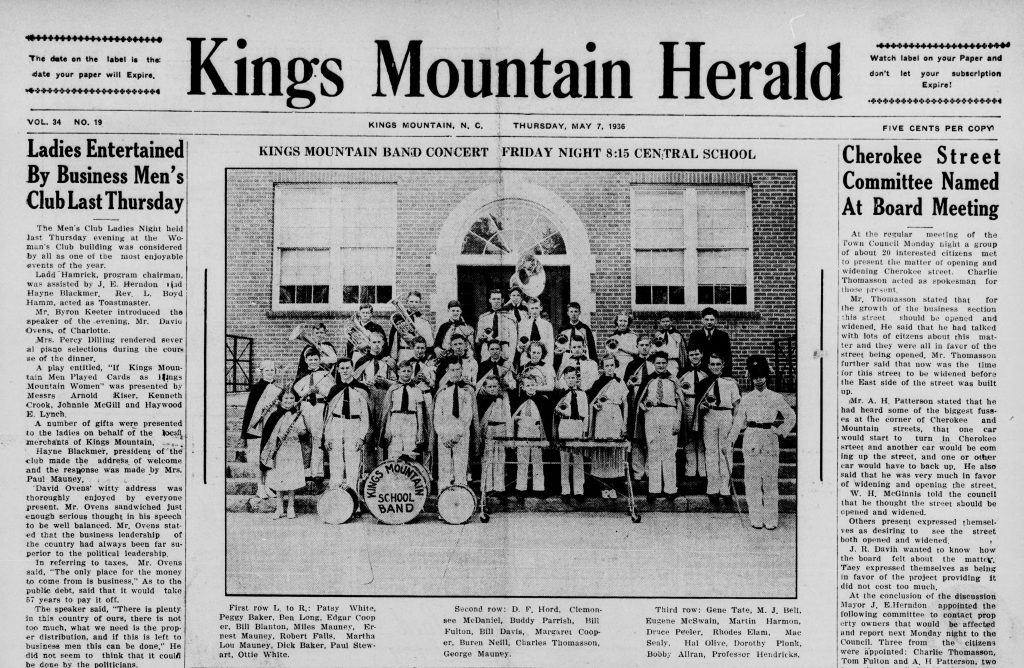 Today we’re pleased to share that additional issues of the Kings Mountain Herald newspaper have been added to DigitalNC. Issues online now date from 1914-2015 (with some years missing in the 20s and early 30s). It’s one of the most complete runs of community papers available on our site.

Some of the new issues were digitized from microfilm thanks to funding from Mauney Memorial Library. When a partner would like more newspapers digitized than we can provide at no cost, they are welcome to provide funding to subsidize getting them online. The new issues from microfilm span 1918-1919, 1935-1937, 1955-1957, 1959-1965 and 1967.

In addition to the microfilmed issues, we worked on some extremely fragile issues from 1914-1919. The Library received these as a gift in 2020 and contacted us asking about digitization. We’ve seen a lot of crumbling newspapers in our time, but these may win the prize. Take a look at the image below which shows how they looked as we gently laid them out for scanning. 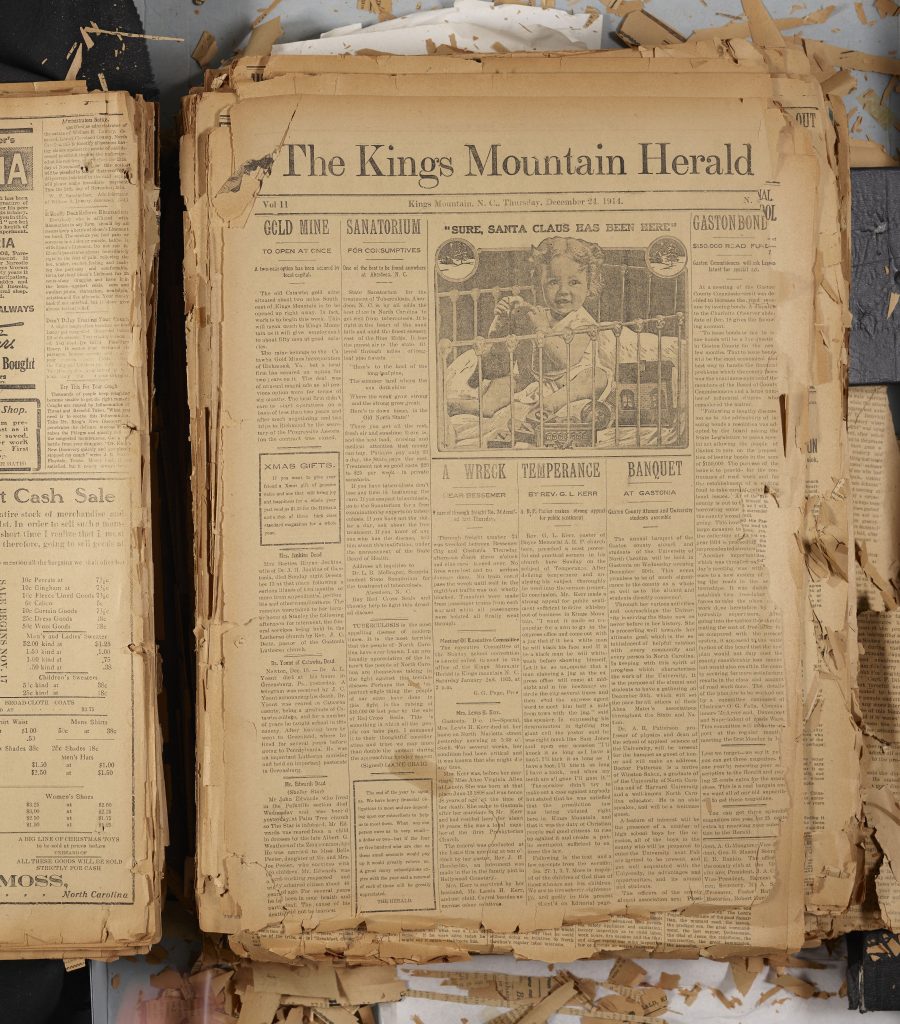 The December 24, 1914 front page of the Kings Mountain Herald.

Like most of the print newspapers we scan, these were shot from above. We attempted to piece back together larger fragments. Each page was carefully turned, but there was quite a bit of “chaff.”  It’s impossible to digitize an item like this without flaking page edges but the staff at Mauney Memorial Library gave us permission to proceed for the sake of making this physical object useful. These may be the only known extant issues from those years, which document World War I and its immediate aftermath, and they are now broadly available.

You can view all of the issues of the Kings Mountain Herald, and also see all of the items digitized for Mauney Memorial Library on the Library’s contributor page. 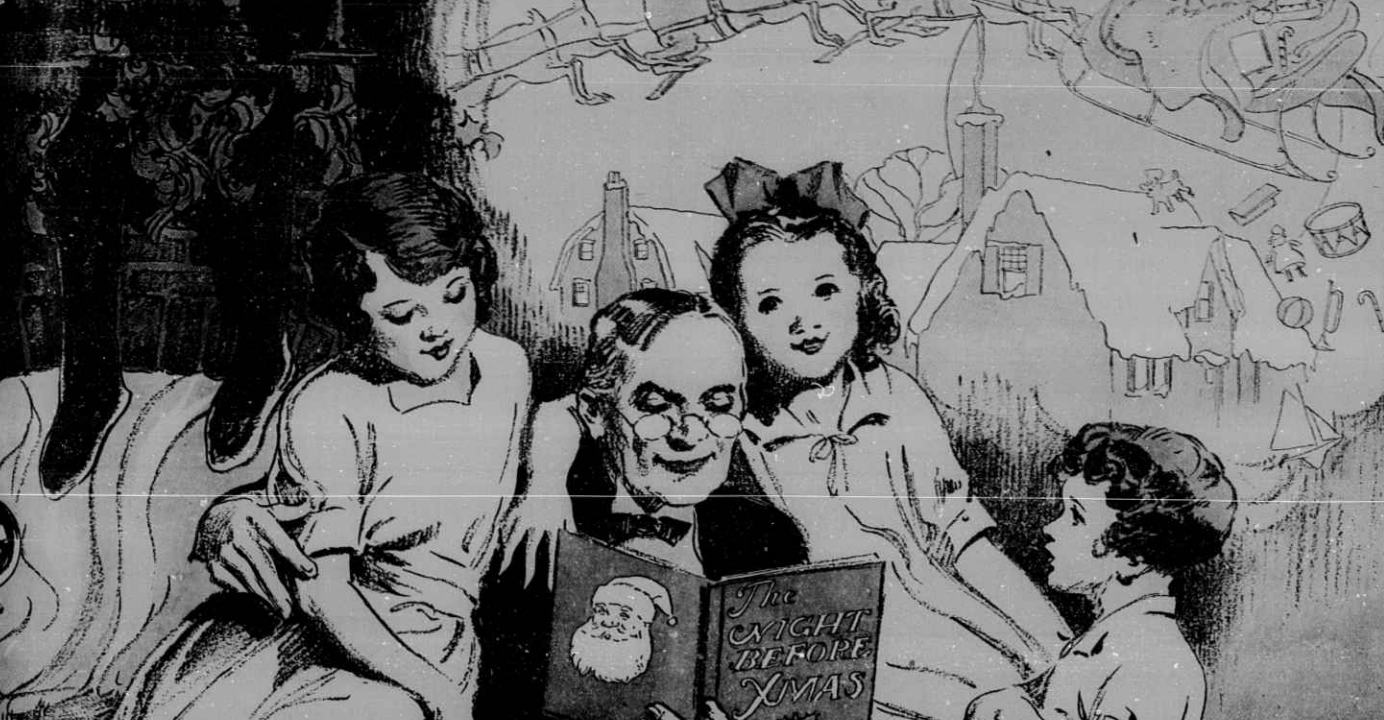 As 2020 comes to a close (hooray!), all of us are wishing for many things in the coming year, whether it’s as simple as a meal with family or as grand as international travel. In the spirit of intention setting, and for a little escapism, we thought it would be fun to search through the DigitalNC newspaper collection for accounts of wishes from years past. What was found were an abundance “Dear Santa”s, funny and touching wish lists from children (and a few adults) to the man in red, printed in local newspapers in the hopes they would be seen and granted. Some holiday wishes also snuck in, too. So, like a virtual, time-traveling wishing tree, here is a collection of entertaining messages to bring a little cheer. 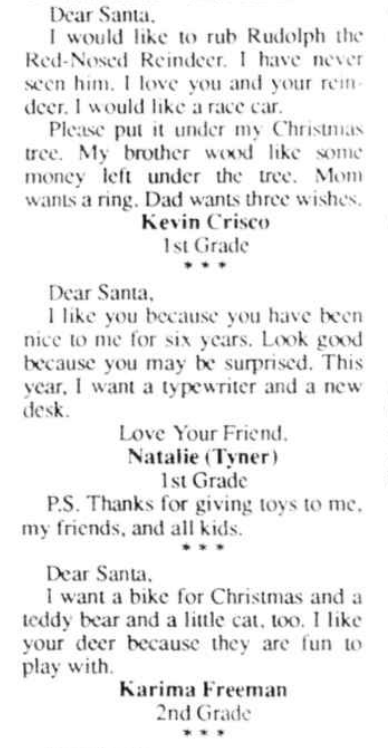 I would like to rub Rudolph the Red-Nosed Reindeer. I have never seen him. I love you and your reindeer. I would like a race car.

Please put it under my Christmas tree. My brother wood like some money left under the tree. Mom wants a ring. Dad wants three wishes.

I like you because you have been nice to me for six years. Look good because you may be surprised. This year, I want a typewriter and a new desk.

P.S. Thanks for giving toys to me, my friends, and all kids.

I want a bike for Christmas and a teddy bear and a little cat, too. I like your deer because they are fun to play with. 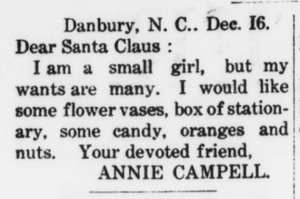 I am a small girl, but my wants are many. I would like some flower vases, box of stationary, some candy, oranges, and nuts. Your devoted friend, 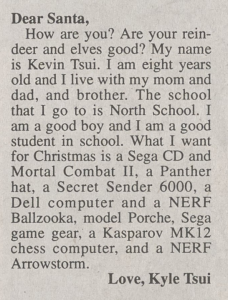 How are you? Are your reindeer and elves good? My name is Kevin Tsui. I am eight years old and I live with my mom and dad, and brother. The school that I go to is North School. I am a good boy and I am a good student in school. What I want for Christmas is a Sega CD and Mortal Combat II, a Panther hat, a Secret Sender 6000, a Dell computer and a NERF Ballzooka, a model Porche, Sega game gear, a Kasparov MK12 chess computer, and a NERF Arrowstorm.

What is the ideal Christmas present?

“A car and my tuition paid.”

“My ideal Christmas present would be to have my college debt paid off.” 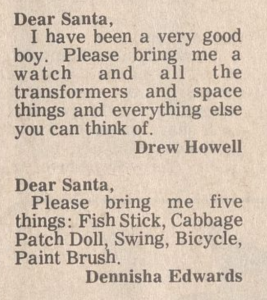 I have been a very good boy. Please bring me a watch and all the transformers and space things and everything else you can think of. 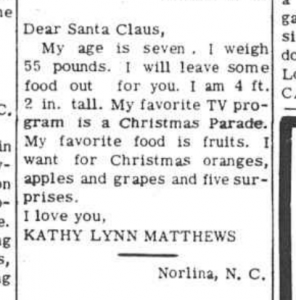 My age is seven. I weigh 55 pounds. I will leave some food out for you. I am 4 ft. 2 in. tall. My favorite TV program is a Christmas Parade. My favorite food is fruits. I want for Christmas oranges, apples and grapes and five surprises. 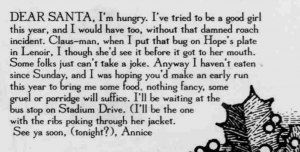 I’m hungry. I’ve tried to be a good girl this year, and I would have too, without this damned roach incident. Claus-man, when I put that bug on Hope’s plate in Lenoir, I though[t] she’d see it before it got to her mouth. Some folks just can’t take a joke. Anyway I haven’t eaten since Sunday, and I was hoping you’d make an early run this year to bring me some food, nothing fancy, some gruel or porridge will suffice. I’ll be waiting at the bus stop on Stadium Drive. (I’ll be the one with ribs poking through her jacket. 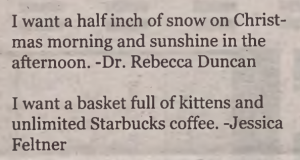 I want a half inch of snow on Christmas morning and sunshine in the afternoon.

I want a basket full of kittens and unlimited Starbucks coffee.

If you’re interested in looking for some more “Dear Santa”s, try searching “dear santa” or “Christmas wish” in the quick search bar on our newspaper collection page. Try the advanced search if you’re looking for specific years. In addition, The Kings Mountain Herald has a gigantic collection of “Dear Santa” messages. From 1981 onwards, you can find them in the last issue of the year.

Distributed from the city of Kings Mountain, the many additions of The Kings Mountain Herald span 1982 – 2015, covering decades of local Cleveland and Gaston county news. Traditional newspaper topics, such as sports, obituaries, and opinion pieces, are continuously explored throughout the years, interspersed in the ’00s with supplements such as “The Great Home Search” and “Medical Matters“. Of note, police reports appear frequently in all decades. 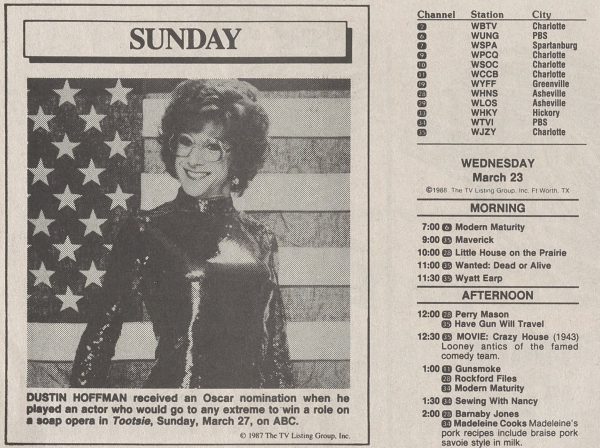 The newest Kings Mountain High School yearbooks, each titled Milestones, come from 1967, 1968, and 1969. They showcase the high school activities of ’60s Kings Mountain teens, including a wide array of clubs. 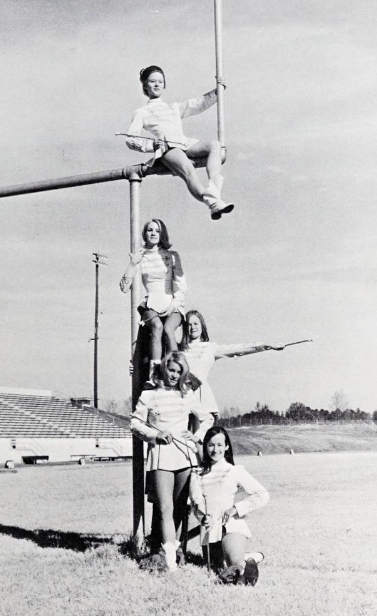 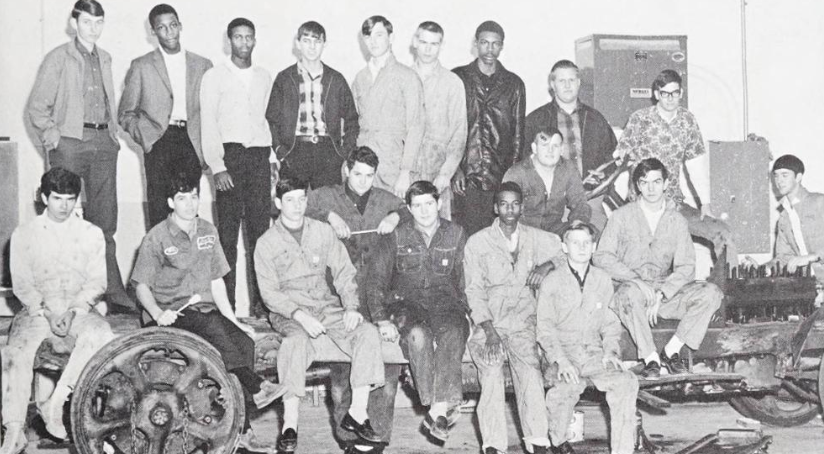 To learn more about The Kings Mountain Herald and see all issues, click here. For more information on Mauney Memorial Library, visit their homepage here, and to view more digitized materials from Kings Mountain and beyond, click here.

Six new artifacts and two newspaper titles are now available on DigitalNC from our partner, the Kings Mountain Historical Museum.

The items date from as early as the 1780’s and reflect depth of the collection of this unique partner institution. The Kings Mountain Heritage Museum began as a storage space in the attic of the old city hall and moved to local homes and offices until a new location could be secured. The museum now resides in the former city post office and houses collections that foster a deeper understanding of the material culture of North Carolina’s Piedmont region.

The items that relate to land grants and court appearances in the surrounding area. Some of the locations mentioned in the documents may be familiar to locals and offer interesting stories about the area. These items could be useful for anyone interested in genealogical research or anyone looking for teaching tools about contracts and agreements from the period.

You can see all of this batch at the links below:

In addition, two newspaper titles have also been added. Several issues from the Kings Mountain Herald are now available, including two from 1914, more two decades earlier than the next issues. Also available is a new title, the Progressive Reformer, with an issue from 1894.

To learn more about the Kings Mountain Historical Museum please visit their contributor page or their homepage.

The following microfilmed newspapers have been selected for digitization in 2015. Almost 90 reels were chosen from over 600 nominated reels, according to our Criteria for Selecting Newspapers to Digitize from Microfilm.