This week we have another 34 newspaper titles up on DigitalNC, including four from Carthage, North Carolina: Former home to the Tyson & Jones Buggy Company.

The “Jones” of the Tyson & Jones Buggy Company was William T. Jones, who was born into slavery and became one of the most well-respected and wealthiest businessmen in Carthage. Born near Elizabethtown in 1833, his father was a plantation owner and his mother was an enslaved person. Prior to the Civil War, he was given his freedom and moved to Fayetteville to work as a painter for a carriage company. It was there that his work was noticed by Thomas Tyson, who convinced him to come to Carthage to work for his fledgling operation in 1857, and by 1859 Jones was made a partner in that company. In 1861, Jones joined the Confederate Army and was subsequently captured by Union forces. While imprisoned at Fort Delaware, Jones began making moonshine from potato peelings and bread crusts and selling it to the Union guards. After Sherman’s March left much of the area devastated, it was the Jones’ moonshine money that allowed the Tyson & Jones Buggy Company to restart production, employing many struggling locals and helping to restart the local economy.

Even though Jones was a captain of industry, North Carolina House of Representatives candidate, and Sunday School teacher with a legacy that lives on in Carthage, it was not widely acknowledged that he wasn’t White. It wasn’t until recently that him being a Black man was recognized as fact and his full story was told. 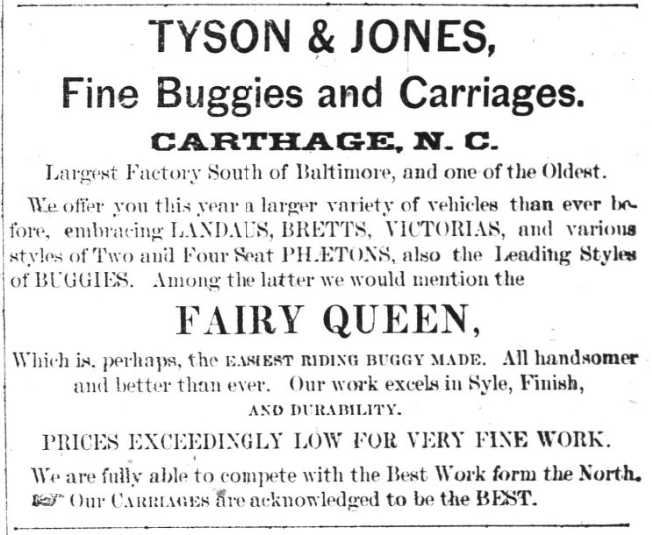