This week we have another 34 titles up on DigitalNC! In this batch we have an article from the Durham Tobacco Plant describing the construction of a new factory being built by W. Duke, Sons & Co., which contained a machine that would revolutionize their tobacco business: The Bonsack machine.

In 1881, Virginia native James Bonsack created the first industrial cigarette rolling machine, a task that was done meticulously by hand up until this point. Bonsack partnered with W. Duke, Sons & Co. in 1884 and supplied them with one of his machines that could roll 250,000 cigarettes in a single day, the equivalent of 48 employees. While this acquisition would make the Dukes the leading cigarette producer in the country, the automation of the process forced many skilled rollers out of work. 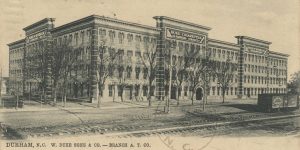