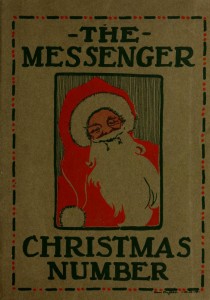 The Messenger or Durham Public School Magazine was initially the title of a monthly publication edited by Durham High School students. It contained editorials, essays, fiction and poetry as well as information on class events like Commencement, sporting events, and meetings.

In 1917, it looks like The Messenger became a yearbook as we think of it today.

In addition to Western Carolina’s collections, the popular North Carolina Maps collection has been added.

The North Carolina Digital Heritage Center is the DPLA’s hub in North Carolina. You can read more about the DPLA and North Carolina in an earlier blog post from the official launch, and our website includes participation information.

Issues of the Alamance Gleaner, a weekly newspaper from Graham, N.C., are now available in the North Carolina Newspapers collection on DigitalNC.

More than 1,100 issues are now freely available to search and browse. The online issues cover the years 1875-1882 and 1911-1926. The Gleaner aimed a broad audience, including not just local news but stories, poetry, and illustrations from state, national, and international events. The issues from the 1910s and 1920s include increasingly elaborate designs and images, reflective of changing technology and taste in the newspaper business.

Combined with The Mebane Leader, covering some of the same years, researchers interested in Alamance County history and people in the early 20th century will find terrific resources on DigitalNC. The Gleaner was nominated for digitization by Alamance County Public Libraries. 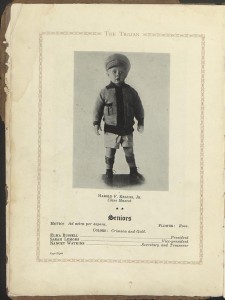 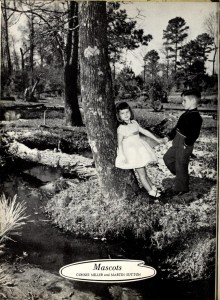 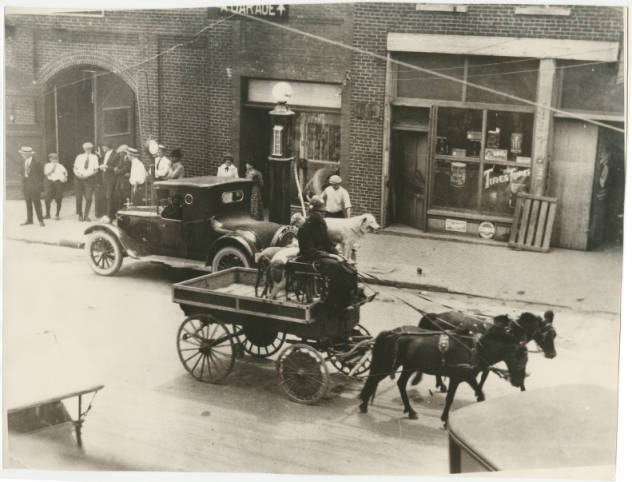 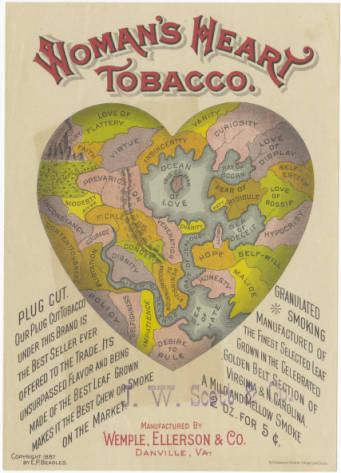 More than 500 issues of The Elkin Tribune, a weekly paper published in “The Best Little Town in North Carolina” (according to the paper) are now available online in the North Carolina Newspapers collection.

We have digitized the years 1930 to 1940 from the microfilm, along with a few stray original copies, at the suggestion of the Elkin Public Library. The newspaper is a terrific source of local news and commentary, along with some coverage of national events. The Tribune was an ardent booster of local businesses, frequently encouraging its readers to spend their money in town. The holiday shopping issues published each December are especially interesting (see examples from 1935, 1936, and 1937). 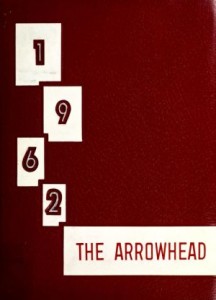 Yearbook cover of the 1962 Arrowhead, from Old Fort High School.

Yearbooks contributed by the McDowell County Public Library have just been added to DigitalNC.org.

You can view all of the yearbooks from McDowell County here.

Here on our blog, we’ll occasionally be featuring “matchups” that showcase relationships between different items in our collection. Today’s matchup? An image from the Tufts Archives in Pinehurst and newspapers from the Southern Pines Public Library. 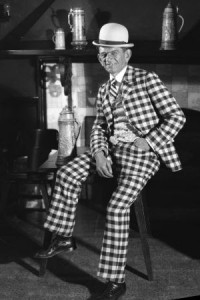 It’s probably easy to understand why this photo caught our eye. From the Tufts Archives of Pinehurst, NC, it’s of Sam Lacks in 1928. Who was Mr. Lacks?

The information with the photo states he was the “Carolina Bellman.” But you can start to fill in more details about Lacks’ life from our collection, using local newspapers. DigitalNC includes issues of The Pilot from 1920-1948. Courtesy of the Southern Pines Public Library, The Pilot was and is published in Moore County. Using The Pilot, we find out the following:

Mr. Lacks was the “genial” “veteran doorman” of the Carolina Hotel (now part of the Pinehurst Resort). He and his wife, known only as “Mrs. Lacks,” had at least two children: Stanley and Leonard. In 1932, Mrs. Lacks was grade mother for the 11th grade and Leonard Lacks was a junior at UNC Chapel Hill. The family summered in New Hampshire.

Both Stanley and Leonard attended Duke University. The family had connections with Massachusetts, especially Boston, and traveled there frequently. They lived in Marlboro Apartments in Pinehurst. 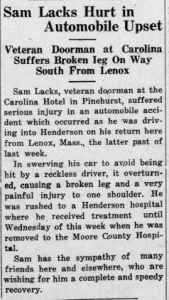 Mr. Lacks unfortunately made headlines when he broke his leg in an auto accident in 1931 (see right), but we’re kindly informed that he was making a “satisfactory recovery” two weeks later. In 1936, he served as Santa Claus at one of the annual Children’s Christmas parties at the hotel. That article calls him the hotel’s “general factotum.”

The last reference we could find, in 1941, mentions Mr. and Mrs. Lacks, their son Stanley, and Stanley’s new bride — all returning from a trip to Massachusetts.

If Mr. Lacks was as popular as the newspaper suggests, he may still be well remembered around Pinehurst. 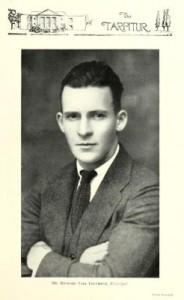 New materials digitized for the Wayne County Public Library are now available on DigitalNC. A list of the new items is below, and includes yearbooks from Wayne County schools, the Goldsboro High School Newspaper, and more.

You can view all materials digitized for the Wayne County Public Library here.

Next week we’ll be launching a redesigned DigitalNC.org. You’ll be able to do everything you can on the current site, with the same great content. The new site has an updated look and some new browsing options, and the “front pages” are also mobile friendly. Take a look and let us know what you think by leaving a comment or emailing us at digitalnc@unc.edu. 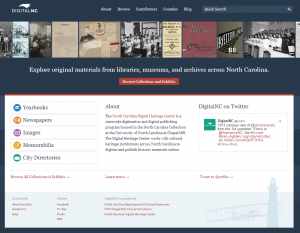 The front page of the new site. 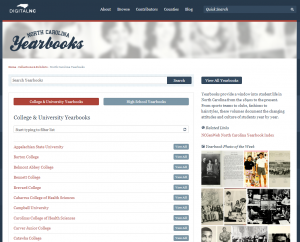 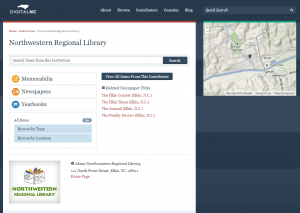 The landing page for partner institutions.