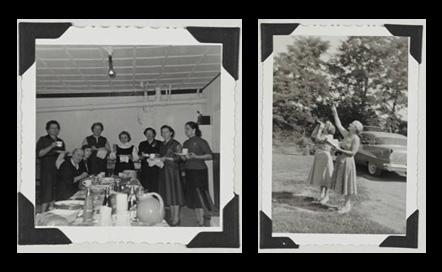 Some of the highlights from the 1957 scrapbook include “A Miss and Her Money,” a pamphlet published by the Institute of Life Insurance in 1956 to introduce money management to girls; several pages of recipes for refrigerator jams; rules for hosting and attending a tea party (p. 62); coverage of the annual Dairy Queen beauty contest; and an incredibly thorough treatise on the selection of household linens (p.92). The scrapbook also reports on the Home Demonstration Club’s participation in the Ground Observer Corps, a Cold War era civilian force which used binoculars or the naked eye to search the sky for threats from Soviet and Japanese aircraft (see photo).

Here is a 1956 recipe for Red Raspberry Jam featured on page 114 of the scrapbook:

Combine fruit and sugar. Let stand about 20 minutes, stirring occasionally. Stir the pectin into the water, bring to boiling, and boil rapidly for 1 minute, stirring constantly. Remove from stove and let stand at room temperature 24-48 hours or until jelled. Seal with paraffin and store in a freezer. Or it will keep several weeks at refrigerator temperatures. Makes about 6 glasses. 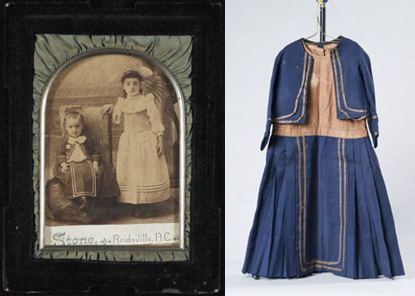 Early student newspapers from Atlantic Christian College (now Barton College) in Wilson, N.C., are now available in the North Carolina Newspapers collection on DigitalNC. The papers cover more than six decades of college life, from 1927 to 1978.

The Summer 2013 newsletter from the North Carolina Digital Heritage Center is now available online. Inside, you’ll find news about a major milestone for the Center, learn about historic newspapers available on DigitalNC, and see featured materials from Stanly, Rockingham, and Alleghany counties.

When it was nearing time to release the 1948 comedy “Mr. Blandings Builds His Dream House,” starring Cary Grant and Myrna Loy, the studio had a novel promotion idea. The story features two harried New Yorkers who move to the country and get in over their heads trying to renovate an old house. In what must have been one of the more elaborate promotional stunts of the time, RKO Pictures built 73 “dream houses” throughout the United States, including two in North Carolina, in Greensboro and Rocky Mount.

The dream houses were fully modern buildings, often equipped by General Electric, which used the opportunity to show off many of their new products. The houses were open to public tours for about a month, often with the price of admission going to local charities. They were later sold by raffle.

The dream house in Rocky Mount was located at 1515 Lafayette Avenue. According to the 1950 Rocky Mount city directory, the house was originally owned by Samuel L. Arrington. Local photographer Albert Rabil photographed the interior of the house, probably around the time of its opening. Rabil’s photographs are preserved in the Braswell Memorial Library (Rocky Mount, N.C.), and many of them are available on DigitalNC, including twelve showing the interior of the dream house.

The dream house was clearly a nice promotional opportunity for businesses all over town. The photographs show signs listing the companies that provided everything from the furniture to the windows. Most notable is the kitchen, filled with gleaming GE appliances. The images are not as clear as Rabil’s studio photographs but there is definitely enough detail to get a sense of what a modern “dream house” looked like in 1948.

Thank you to Local History Librarian Traci Thompson at the Braswell Memorial Library for providing information about the Rocky Mount dream house and also for sending links to websites and articles with more information:

The Museum & Archives of Rockingham County recently worked with the North Carolina Digital Heritage Center to photograph and display online several historic artifacts from their collection. The Museum, located in the historic county courthouse in Wentworth, N.C., documents all aspects of county history through its extensive collections of artifacts, documents, and more.

Photographing museum artifacts can be challenging. The 19th-century wedding dresses from the museum were especially difficult to prepare for digitization. The Digital Production Center in Wilson Library has a dressmaker’s mannequin used for photographing historic clothing, but the dresses from the museum were so small — especially in the waist — that they wouldn’t fit. We ended up simply using a hanger to hold them up and used a little tissue paper to give them a fuller appearance. With expert help from one of the Digital Production Center photographers, we were able to capture images that show all of the fine details of the dresses and put them online so that users can zoom all the way in to the high resolution images. Here are some examples: 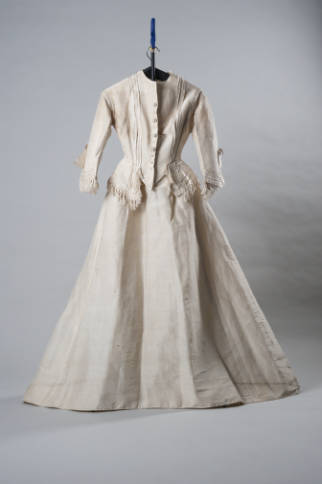 Other items photographed from the collection include milk bottles from local dairies, an old adding machine from a local store, Christmas cards from a local schoolteacher, and a fragile, somewhat scary-looking doll from the 1920s.

Early issues of the Chatham Blanketeer, the company newsletter from the Chatham Manufacturing Company, are now available on DigitalNC. The Chatham Manufacturing Company was established in the late 1860s in Elkin. The company grew and expanded in the 20th century and would become famous for its wollen “Chatham Blankets.” Learn more about the company in the Encyclopedia of North Carolina, available on NCpedia.

The Blanketeers were produced for the company employees and contained more personal than business news. Columns reported primaily on social news and events and the mill baseball team was featured regularly. Issues from 1933 to 1940 are now online. The original copies are in the Elkin Public Library, a branch of the Northwestern Regional Library system.

Historic student yearbooks from the Stokes County town of King are now available in the North Carolina High School Yearbooks digital collection on DigitalNC. The online collection includes seventeen yearbooks from King High School, ranging in date form 1948 to 1964. The original yearbooks are in the collection of the King Public Library, which is a part of the Northwestern Regional Library system.

In the summer of 1863, the Observer was still publishing twice a week. Following a common practice of newspapers of the time, many of the reports from the war were excerpts or summaries gleaned from other newspapers. The paper published on July 2, 1863, the day after the start of the battle, contained no news of Gettysburg, but did include reports from the New York Herald of the Confederate army in Pennsylvania:
More recent news, from June 30, came from the Richmond Examiner:

The newspaper published on July 9 finally contained news of the battle, but the reports were inconclusive at best. The Observer reprinted reports from Richmond and Baltimore papers which described the first day’s battle, but were unable to say anything definitive about the outcome of the battle. The latest news available at the time was the evening issue of the Baltimore American from July 3, which wrote, “there must have been a great battle fought yesterday afternoon and evening (July 2d) as heavy cannonading could be heard at Parkton, Fredericksburg and Harrisburg, from noon to 9 o’clock at night, when it ceased. A gentleman who came down this morning (July 3d) from Parkton, says that the cannonading was resumed again at daylight this morning with such force and volume as to almost make the ground tremble.”

It was not until the paper published on July 13 did the readers in Fayetteville begin to get a sense of the enormity of the battle and its tragic outcome for the Confederate troops:
Nearly an entire page is given to accounts of the battle culled from multiple newspapers. These reports often conflicted greatly, with the news clearly exaggerated to favor whatever side the editors supported. The Baltimore American said that “rebel losses are estimated at 20,000” and that “the enemy is in full retreat, demoralized and almost disorganized.” The Richmond Enquirer acknowledged that “the enemy are said to have fought well” and that “our loss is estimated at ten thousand.” The Richmond paper also noted the significance of the battle, but still put its own spin on the news: “The fighting of these four days is regarded as the severest of the war and the slaughter unprecedented; especially this is so of the enemy.”
The editor of the Observer offered thoughts on the battle and its aftermath in the editorial section of the July 13 paper, acknowledging the grim news but remaining defiant in the end: