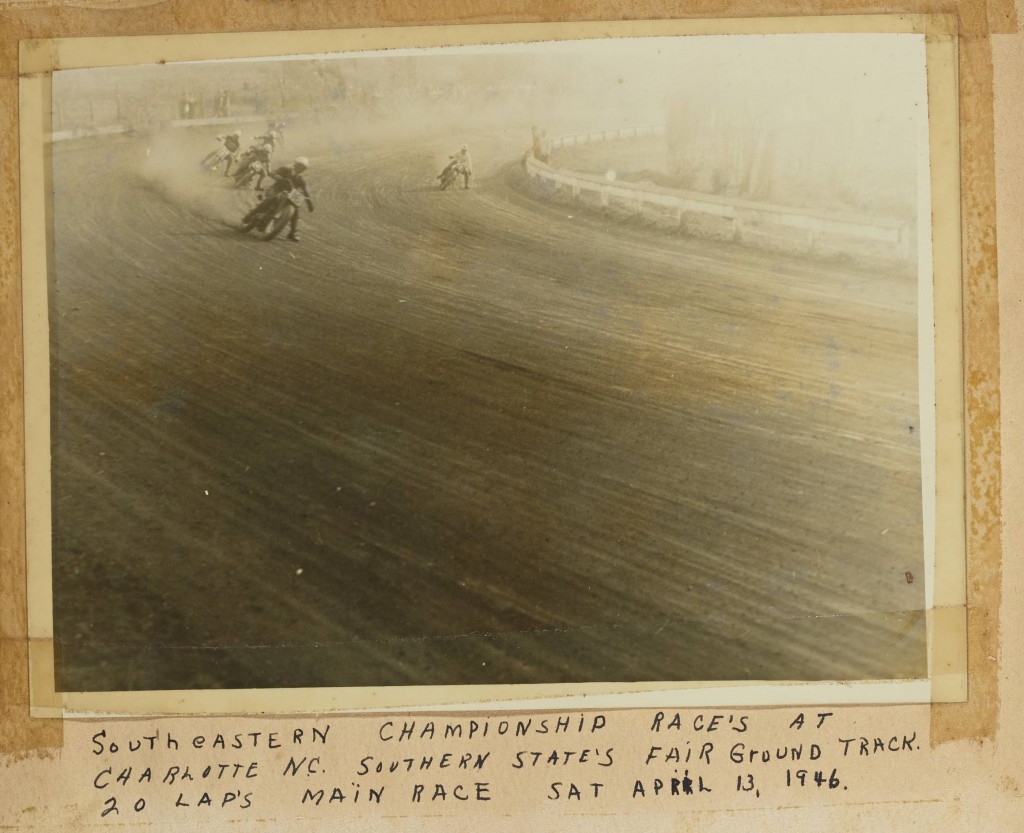 From photos and papers documenting Albemarle schools to ledgers and scrapbooks of local citizens, we’ve uploaded more materials from the Stanly County Museum. One of our favorite items is the Marvin R. Stokes scrapbook, which has photographs related to his military service as well as action shots of motorcycle and car racing in Charlotte, like the one at right (page 9).

There were also a number of photos added to those already available in the Images of North Carolina collection. You can also view all items from the Stanly County Museum. 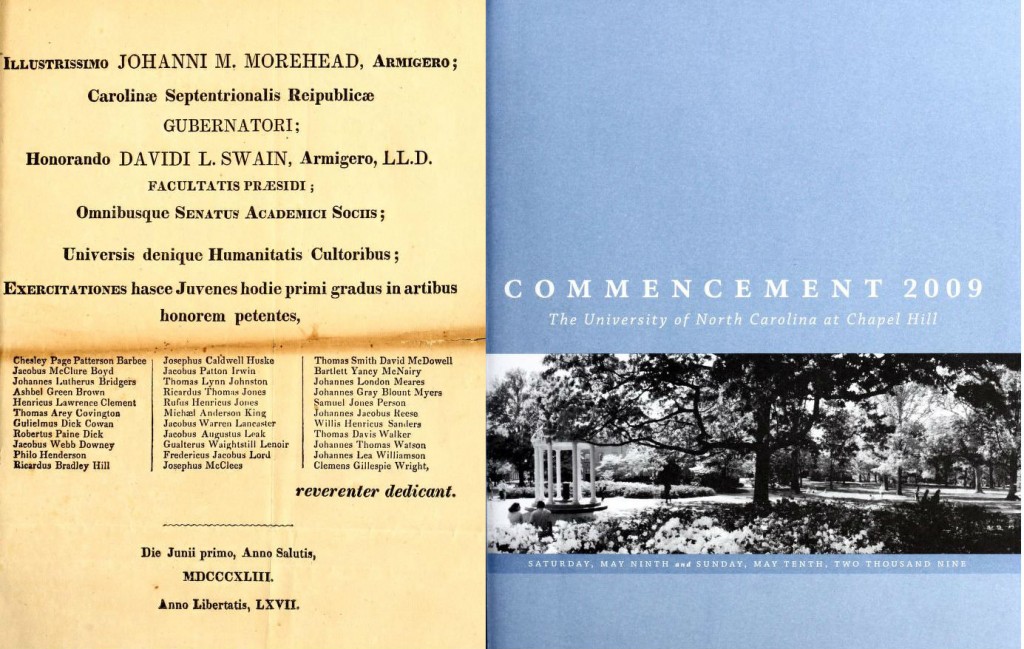 UNC-Chapel Hill commencement programs from 1843 and 2009.

We’re pleased to present the Commencement Programs of the University of North Carolina at Chapel Hill, from 1843 through 2009, now on DigitalNC.

From 33 names printed in a two-page document, written in Latin, to 80 pages describing accolades, honored guests, and university traditions, these programs have grown as much as the commencement event.

The 1843 program includes several names for which we know more from NCpedia and East Carolina University:

We also have catalogs, yearbooks, and other campus publications like the Basketball Blue Book and Carolina Magazine from UNC-Chapel Hill. 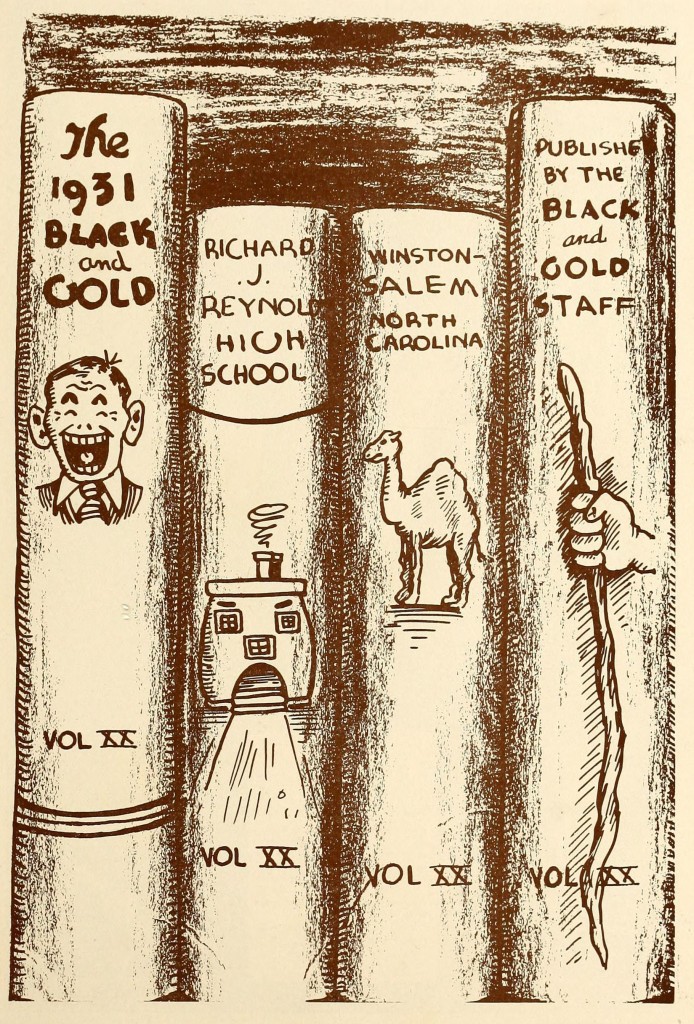 The 1931 issue of The Black and Gold from RJ Reynolds High School warrants a special mention. That year’s staff had very ambitious illustrators, as every student’s photo is accompanied by a humorous caricature that offers a hint (albeit a slightly insulting one) at the student’s personality. Clubs and societies receive similar treatment. The yearbook also reveals that the school received a visit that year from Rear Admiral Richard E. Byrd, a polar explorer and aviator, thanks to the school’s Fine Arts Foundation. View Admiral Byrd’s letter to the school and the many fine caricatures here. 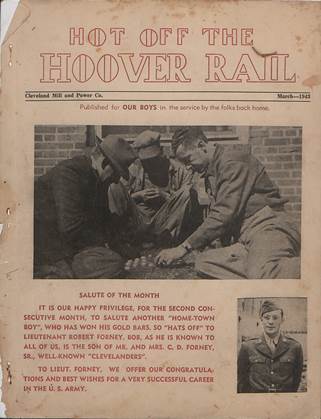 DigitalNC is pleased to announce that materials belonging to the Lawndale Historical Society are now available online.  Included is the complete run of Hot Off the Hoover Rail and a publication titled Sketches of Piedmont High School.

Hot Off the Hoover Rail was a monthly news bulletin published by Cleveland Mill and Power Company “for our boys in the service” during World War II.  Each issue included a “salute of the month,” a letter from a mother and father of the month, church news, columns called “Old Maids Row” and “Lawndale Party Line,” letters from soldiers and a list of soldiers who had been promoted or were home on furlough.  This publication gives much information about individual citizens of Lawndale and the goings-on at the time. 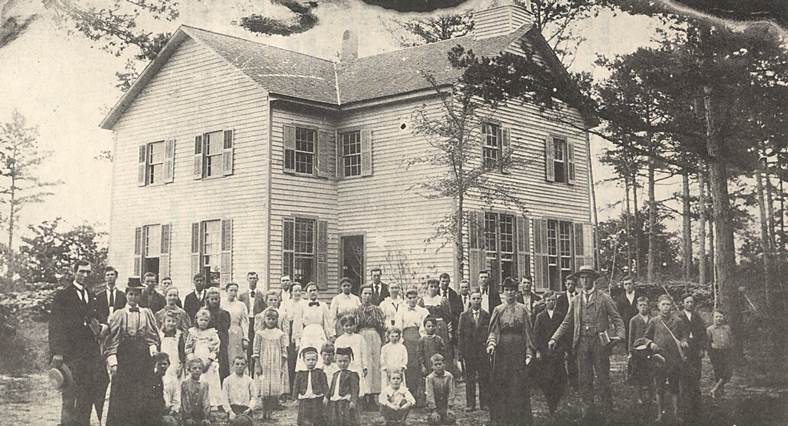 This week our colleagues at the North Carolina State Library are focusing on Halifax County as their county of the week.  We are taking the opportunity to again dive a bit deeper into some of our city directories from that county.  Two cities from Halifax County have directories in DigitalNC: Roanoke Rapids and Scotland Neck.

The directories from Roanoke Rapids, which cover 1938 until 1963, were all published by the Southern Directory Company, which was based in Asheville, NC, and are all Miller’s Directories.  Roanoke Rapids, which is Halifax County’s county seat, was a rapidly growing town during the period the directories were published.  In addition to the expected listings of businesses and addresses of citizens of Roanoke Rapids, the directories all include detailed descriptions of facilities in the town, including public works, churches, schools, and amusements.  There are also descriptions of the population of the town and all the counties in NC, and the tax rates in the town and county at the time. 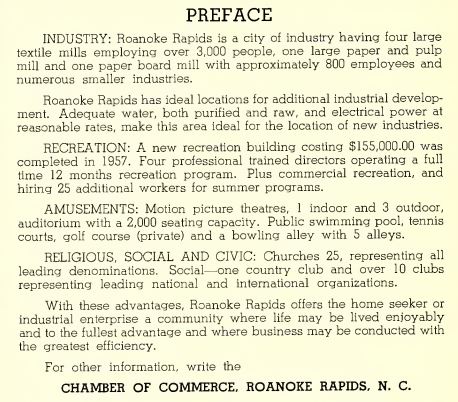 Information about facilities in town from the 1958 city directory

Taxes in Roanoke Rapids from the 1958 city directory

There are two directories from Scotland Neck, which cover 1960-1962.  Scotland Neck’s directories were published by Hill Directory Co., Inc., based out of Richmond, VA.  These directories do not included detailed descriptions of the town, just the basic ads, telephone directory and address directory for Scotland Neck and the surrounding area.  The ads in the Scotland Neck directories all include well done drawings by the publication company, making that section more appealing for consumers compared to the Miller directories for Roanoke Rapids. 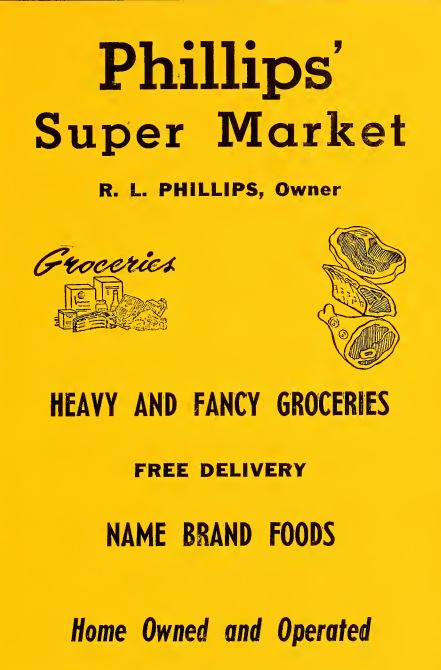 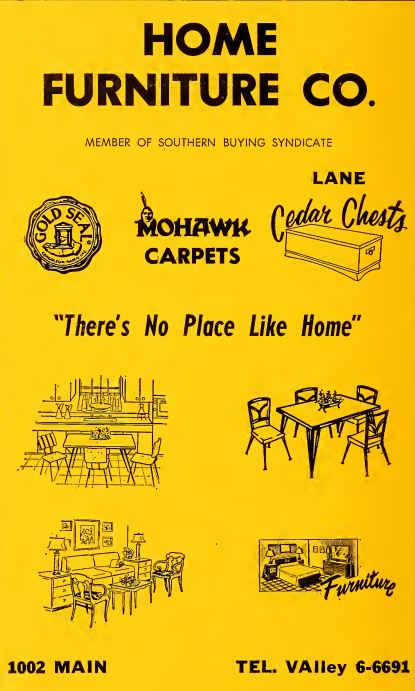 With the recent 10 year anniversary of Facebook and various other forms of social media such as Twitter and Instagram becoming increasing ubiquitous in our lives, there are often reports of the end of privacy for everyone.  However, if you take a look at newspapers from the late 1800s and early 1900s, you have to wonder when privacy in one’s social life ever existed.  As the quote above about Mr. Stewart’s catch from The Danbury Reporter shows, no news was too small to be printed.  Newspapers provided a variety of resources for citizens that we now often turn to the internet for, from publishing serials such as Sherlock Holmes, ads from assorted businesses, the weather, train schedules for the day or week, and crop pricing, in addition to the regular news of the day.  So it makes sense that the media of the day also was social in nature. 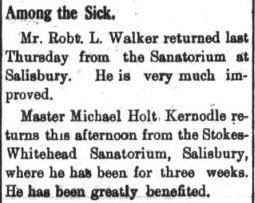 News of those sick in Graham, NC from the Alamance Gleaner in 1911

Small town newspapers in particular had weekly features that described in detail all the goings-on in town, including the very mundane of “Mr. Jones has a cold this week.  We wish him well.”  Sounds an awful lot like a tweet if you just add in a hashtag or two, “Heard @MrJones has a cold this week. #feelbetter #boosickness!”  In towns with just a few hundred people, where everyone likely knew who you were anyways, one’s social network was indeed the whole town and these local news sections provide a recording of what was happening on a weekly basis. 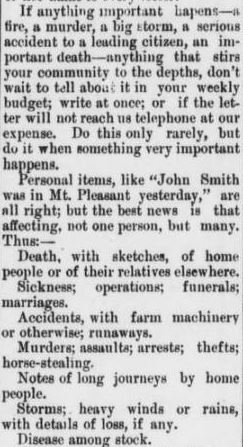 Called a variety of names from “Local News,” “Items of Local Interest,” etc, these sections of the paper were usually a page or two after the main headlines of the day.  It is not always obvious who wrote the columns, but some do identify it as being “Club News,” being pulled together by the social women’s clubs in the area.  Others, such as the Asheboro Courier pictured above, make appeals from the paper’s editors themselves to send in items to be published.  Those with a more social club focus saw such columns as being primarily for women, such as the Rocky Mount Herald, which called their section, “Of Interest to Women.”

Other papers, such as the Forest City Courier and the Elm City Elevator, had a mix of both social and more business items in their local news and called their section, “News Items in and Around Forest City,” and “Personal Paragraphs.” 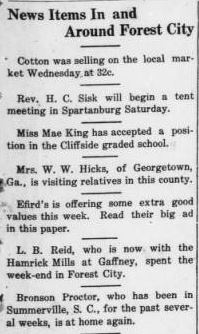 For those researching the daily lives of people around the turn of the 2oth century, these sections of newspapers can be a rich resource, not only to learn who was sick and who was visiting from out of town, but these sections also contain information about social gatherings in town, such as camp meetings, lectures, and openings of businesses such as mills and restaurants.  The newest technology can also come up in the local news items, as the telephone line mention shows below. 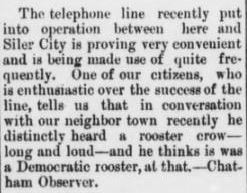 Telephone news from the 1903 Asheboro Courier

Newspapers from across the state continue to be added at rapid pace to DigitalNC.  The Press and Carolinian and the Hickory Democrat, two newspapers printed in Hickory, NC are now available online.

The Press and Carolinian, which was a merger between The Press and The Carolinian papers in Hickory in 1887, covers general news of the day both in Hickory and across the country.  In their inaugural issue following their merger, the editors state to their readers that, “Our purpose is to spread, not to suppress the truth, and in this we ask the aid of all…We intend to make the Press and Carolinian not only a welcome visitor in every household but an indispensable luxury.”  While they claim an air of neutrality, the paper has a definite Democratic slant to its reporting and promoted the Democratic party ticket headed by Grover Cleveland in 1892. Other topics regularly reported on include big issues of the day such as union strikes, tariff disagreements, and an overall focus on the economic conditions of the country.  The issues available in DigitalNC cover 1887 until 1892.  The Press and Carolinian was recommended for digitization by the Catawba County Library.

The Hickory Democrat is a much flashier looking newspaper than the Press and Carolinian, with issues from 1906 until 1915 available online.  On the byline they inform their readers that they provide access to “All the News While It Is News.”  One particular feature of the Democrat that makes it stand out is the prevalence of political cartoons on every front page of the paper, relating to both state and national news items.   The Hickory Democrat was recommended for digitization by the Hickory Public Library. 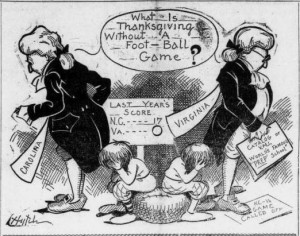 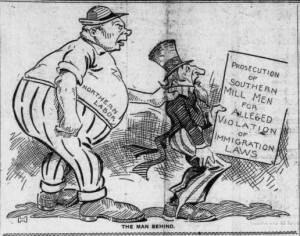 Newspaper issues covering 1934 to 1938 of the Rocky Mount Herald are now online through DigitalNC.  The paper, published weekly, focused on both local and national news items, and covered stories include big events such as Franklin Delano Roosevelt’s election. As Rocky Mount was a major center of tobacco commerce in the eastern part of the state during this period, farming news, particularly as it related to tobacco, is heavily covered.  There are also more light hearted elements to the publication including a comic strip page in each issue, which provide a view into 1930s humor. 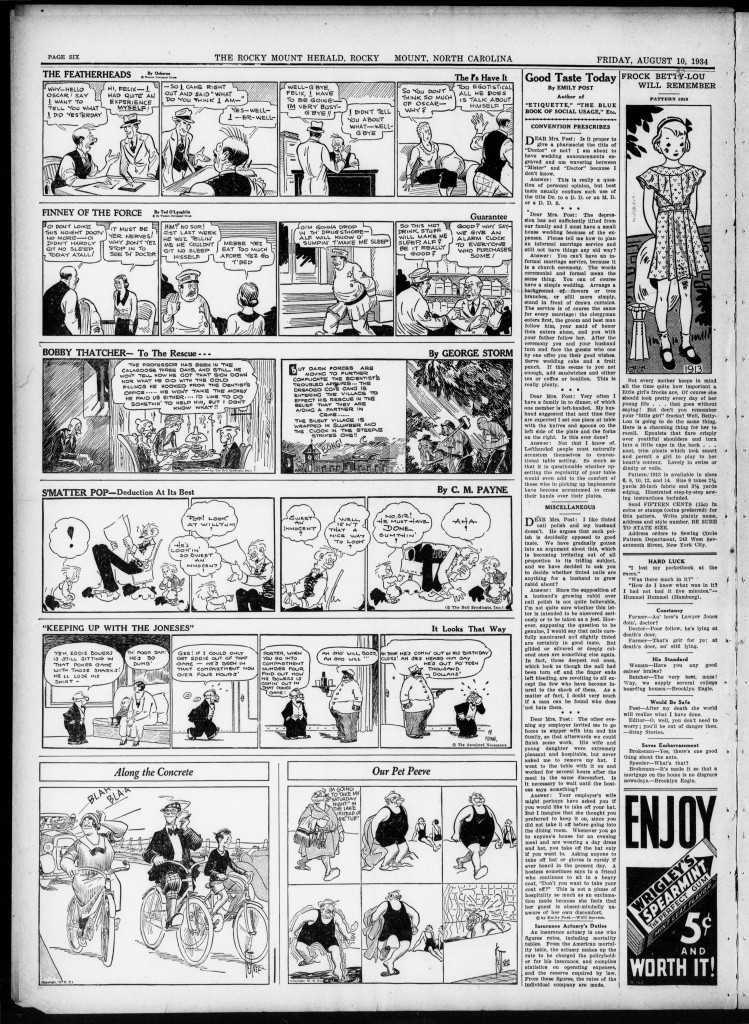 The newspaper is part of the Newspaper Digitization Project and was recommended by the Braswell Memorial Library (Rocky Mount, N.C.). 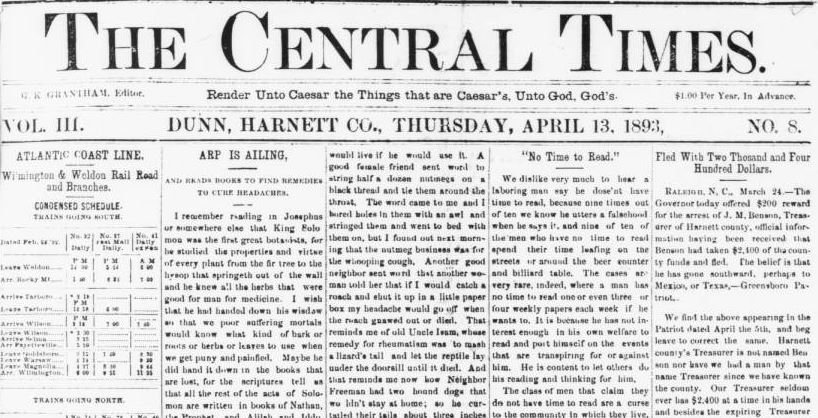 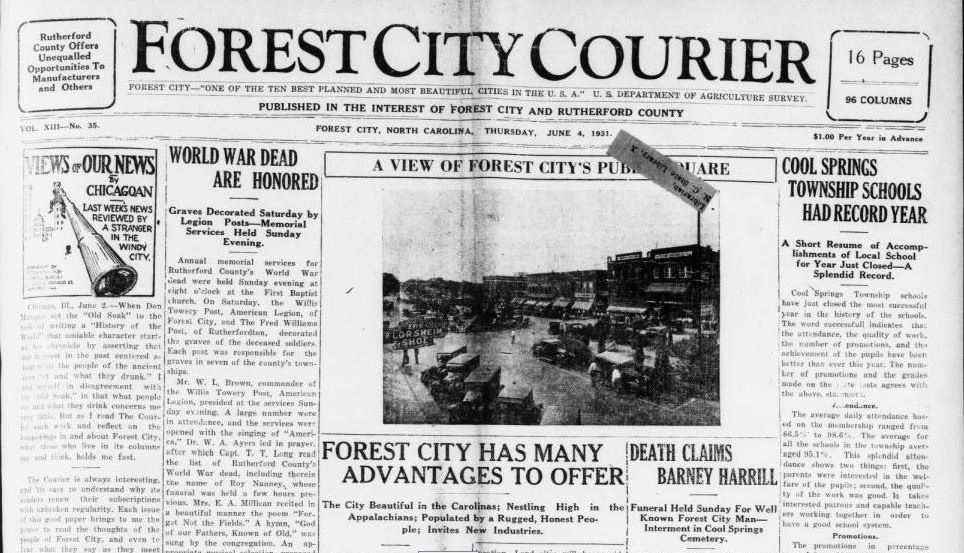 Over 400 issues of the Forest City Courier are now available online through DigitalNC.

Quoting the U.S. Department of Agriculture Survey reporting that Forest City is “One of the Ten Best Planned and Most Beautiful Cities in the U.S.A.” on its byline, the Courier covers Forest City and surrounding towns in Rutherford County. The issues available in DigitalNC cover the time period of 1919 through 1931. Frequent topics include local issues such as the need for road improvements and the promotion of tourism in North Carolina. During these years, the Courier ran a regular column entitled “Important News the World Over: Important Happening of this and Other Nations for Seven Days Given.”

This title is part of the Newspaper Digitization project and was selected for digitization by Rutherford County Library.