A student speaking to a crowd of other students, 1958

These yearbooks include individual portraits, class portraits, photos of faculty, and more. They also highlight photographs of student activities, social clubs, the school’s orchestra and band, the school’s sports teams, and more. This batch also includes copies of magazines that students worked to write, edit, and publish. The Greensboro High School Magazine, the first of its kind to be uploaded to DigitalNC, was published three times a year by the students, and included editorials, short stories, and more. One student wrote about his experience riding along with Presidential candidate William Jennings Bryan as he was traveling throughout the South, for example.  The school’s other magazine, Homespun, highlights the writing and literary accomplishments of the students, including smaller fictional short stories, poems, 1-act plays, and more.

Follow the links below to browse the items included in this batch:

To learn more about the Greensboro History Museum, you can find more information by visiting their partner page or taking a look at their website. 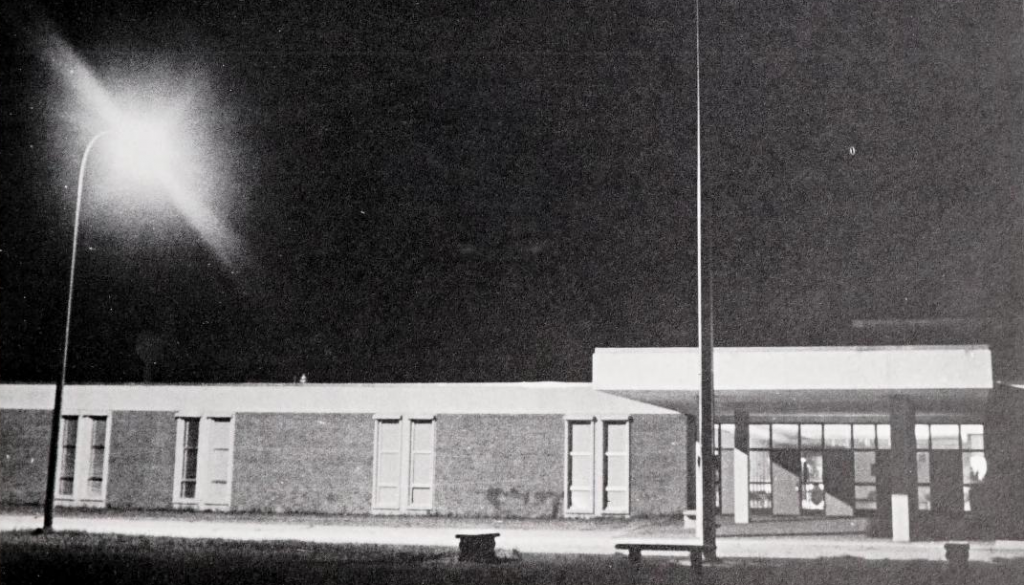 A new batch of yearbooks from Nash County are now available on DigitalNC, courtesy of our partner, the Braswell Memorial Library in Rocky Mount, N.C. In this collection are over half a dozen yearbooks from the 1940s through the 1960s from across Nash County, including Spring Hope and Bailey, North Carolina. These yearbooks from Nash County give us fascinating insights into what life was like for high school students in the middle of the 20th century. To see more materials from the Braswell Memorial Library, visit their partner page or check out their website. Two Randleman High seniors of the class of 1965

These yearbooks contain individual portraits, class portraits, as well as photographs of student activities, sports teams, faculty and clubs. Some of the yearbooks also include class poems and class songs, class and school histories. Readers can also find “last wills and testaments”, where the graduating class leaves behind objects or memories to the next class, and class prophecies, where the students imagined where they would be in the future.

Students from Franklinville School gathered to take a 1966 group photo

This new batch of yearbook is a valuable addition to DigitalNC, having these yearbooks illustrate what life was like across Randolph County in the 20th century. To see more from the Randolph County Public Library, check out their partner page, or visit their website. A new batch of yearbooks courtesy of the Mount Airy Museum of Regional History are now live. These yearbooks are the first materials on DigitalNC from this partner and they are chock full of personality. A very distinct staff page from the 1954 edition of Franklin High School’s Maroon and Grey. To learn more about Mount Airy Museum of Regional History, visit their website or partner page. Links to yearbooks are organized by school and listed below.

Almost a hundred new maps and blueprints have been digitized and added to DigitalNC, courtesy of our partner, the Chapel Hill Historical Society. Dated from 1875 to June 2007, these maps illustrate how much the city of Chapel Hill and Orange County has changed in the last century and a half. A map of how Chapel Hill would have appeared in 1818. Franklin St and Columbia St are featured.

This new batch contains many different types of maps and blueprints, including maps of Chapel Hill neighborhoods, site plans for individual properties, blueprints of the Chapel Hill Public Library and its additions, maps of the city’s outer limits, and township tax maps.

A color-coded map of the Glen Lennox properties circa 2008

Beyond recent maps of Chapel Hill, this batch also includes several other interesting items. One map sketches Orange County, as well as the neighboring counties that ceded land between the years of 1752 and 1849. Another sketches the state of North Carolina as it appeared in 1753, when Anson and Rowan Counties stretched to the west. Another map, from 1976, sketched Chapel Hill as it would have appeared in 1818.

Other items in the collection tell their own Chapel Hill stories. In 1925, R.L. Strowd, a local landowner, sold a number of lots throughout Orange County, and those deeds of land sales are also included in this collection. Another record of land sale is included, when Samuel Morgan sold land to Jesse Hargraves in 1845 for the cost of $4,300. This batch of items also includes a book that contains detailed maps of the Chapel Hill and Carrboro area from the 1960s through the 1980s, as well as an informational pamphlet from 1953 advertising the Lake Forest neighborhood of Chapel Hill.

By adding yet more maps, blueprints and artifacts to our collection, we can learn and understand more about the city that DigitalNC calls home. To see more materials from the Chapel Hill Historical Society, visit their contributor page or check out their website. The exterior of Boonville High School, 1964

A new batch of yearbooks from Boonville, North Carolina is now available on DigitalNC, courtesy of our partner, the Boonville Community Public Library through the Northwestern Regional Library. Included are over 20 yearbooks from Boonville High School, stretching from 1939 to 1967, and a 1993 booklet detailing the history of the Quaker community at Deep Creek.

These yearbooks contain individual portraits, faculty portraits, class portraits, and photographs of student activities, including clubs and sports teams. Some also include class histories, where they reminisce about their time at Boonville High School, “class prophecies” where the students predicted they will be in the future, and “class wills”, where students bequeathed their skills, abilities, or titles to incoming seniors and underclassmen. Because this collection contains yearbooks across nearly 3 decades, they represent a great transitional time in the school’s history. To learn more about the Boonville Community Public Library, take a look at the partner page for the Northwestern Regional Library or their website.

Players from the 1968 Warriors team

A new batch of several yearbooks from Wendell, NC are now online and are available on DigitalNC, courtesy of our partner, the Wendell Historical Society. This batch of The Shield from Vaiden Whitley High School stretches from 1966 to 1968.

As Vaiden Whitley High School was founded in 1966, this represents the first collection of yearbooks from VWHS, and allows us to see what its first students thought of the new high school. The 1966 Shield, a result of Wake County schools consolidating for integration purposes, made sure to note the importance of a wholesome school environment and supporting all students. These yearbooks include individual portraits, class portraits, photos of student clubs and lists of individual accomplishments, and more. Sports team accomplishments were also highlighted. For example, the 1968 Warriors team (right) defeated every team in their conference at least once to finish the season 17-9.

These yearbooks provide a valuable window into what school life was like in Wake County at the time. To see more from the Wendell Historical Society, click here to view their partner page, or visit their website.