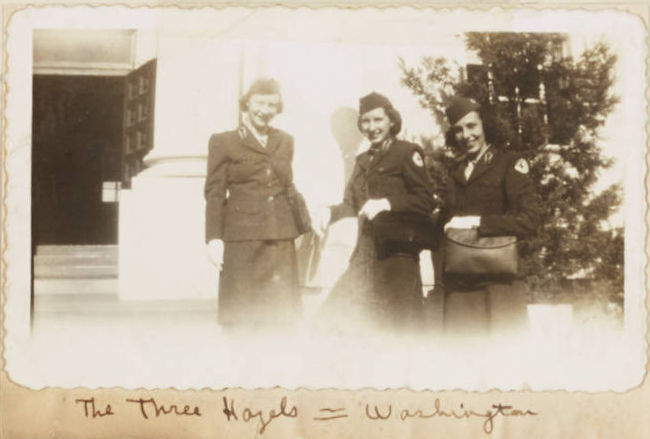 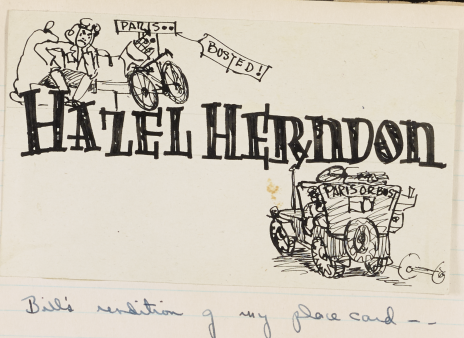 Hazel Herndon, a young woman from Charlotte, North Carolina, joined the Red Cross in 1944 and was assigned overseas during World War II. Throughout her time abroad, Hazel kept a large and detailed scrapbook about her life. It contains diary entries about her work in the Red Cross, travels around Europe (including England, France, and Germany), and personal life, such as her friendships and marriage. The scrapbook is full of photographs, letters, pamphlets, postcards, maps, and many more items that paint a detailed picture of Hazel Herndon’s life working for the Red Cross during World War II. 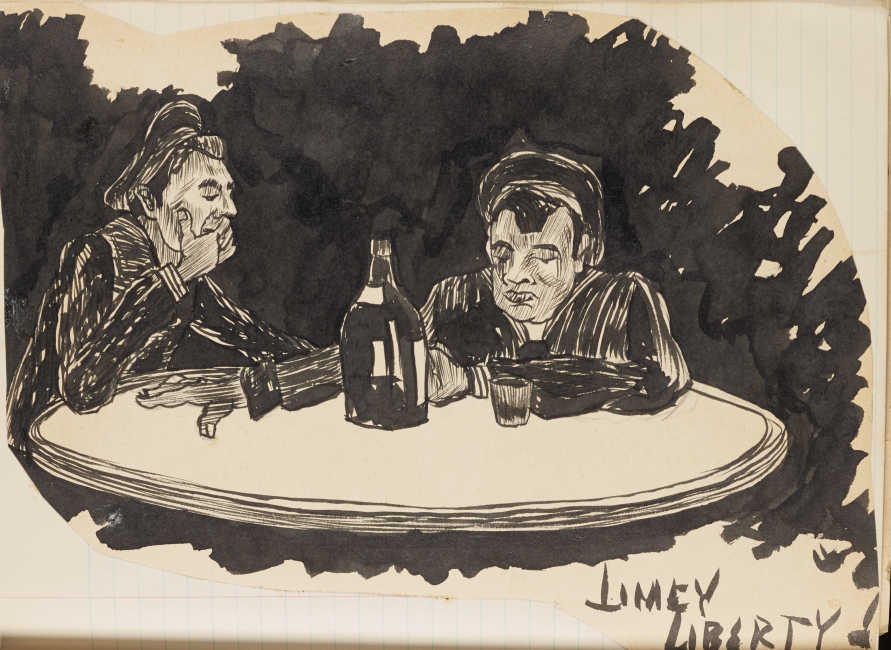 A drawing from Hazel Herndon’s journal, labeled “Limey Liberty.” The journal is full of similar illustrations. 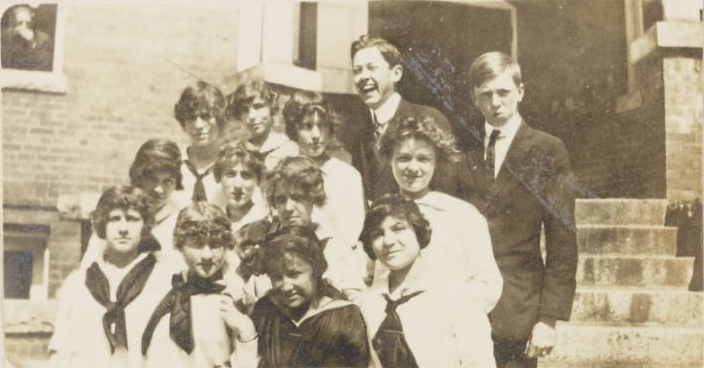 Six new scrapbooks from Perry Memorial Library (Henderson, N.C.) have been digitized and added to DigitalNC. The scrapbooks are primarily from the Henderson, North Carolina Woman’s and Junior Woman’s Clubs from the late fifties to early seventies. They include these:

More scrapbooks from Henderson, North Carolina can be seen here, plus yearbooks here. You can view more from Perry Memorial Library on their DigitalNC page and learn more on their website.

The West Charlotte Orchestra, from The Lion 1965.

More yearbooks from Charlotte, N.C. have been added to DigitalNC. These seven yearbooks from the 1960’s come from several different schools and were provided by the Charlotte Mecklenburg Library. The yearbooks provide insight to student life in the 1960’s, depicting clubs, sports, activities, and awards. They include: 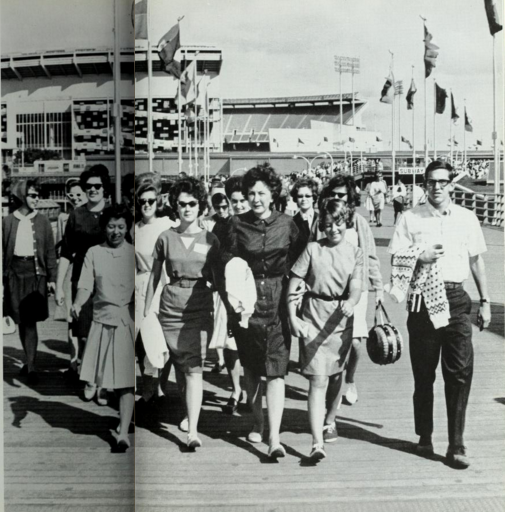 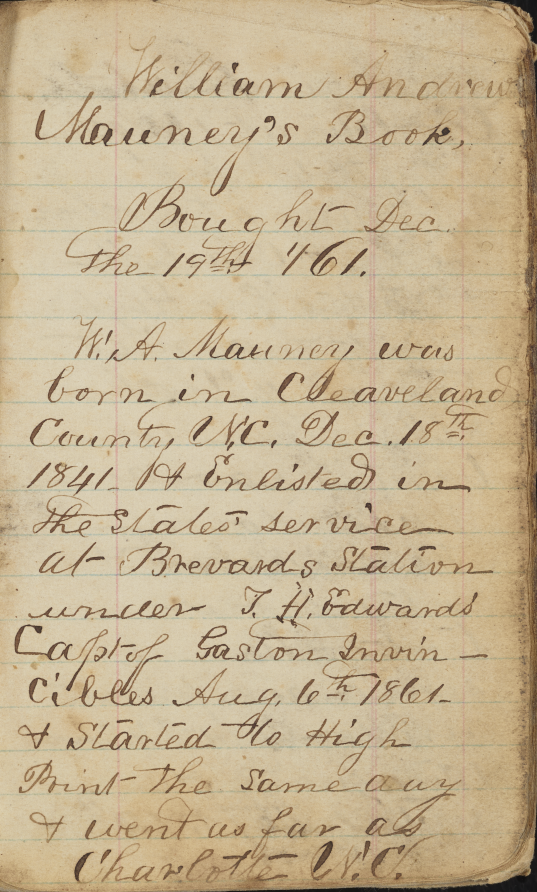 William Andrew Mauney was a Confederate soldier from North Carolina who kept a diary during the Civil War. The diary, which comes from the Kings Mountain Historical Museum, has been digitized and added to DigitalNC. The Mauney Diary also includes a transcript of the diary (beginning here), making the text searchable and easier to read. 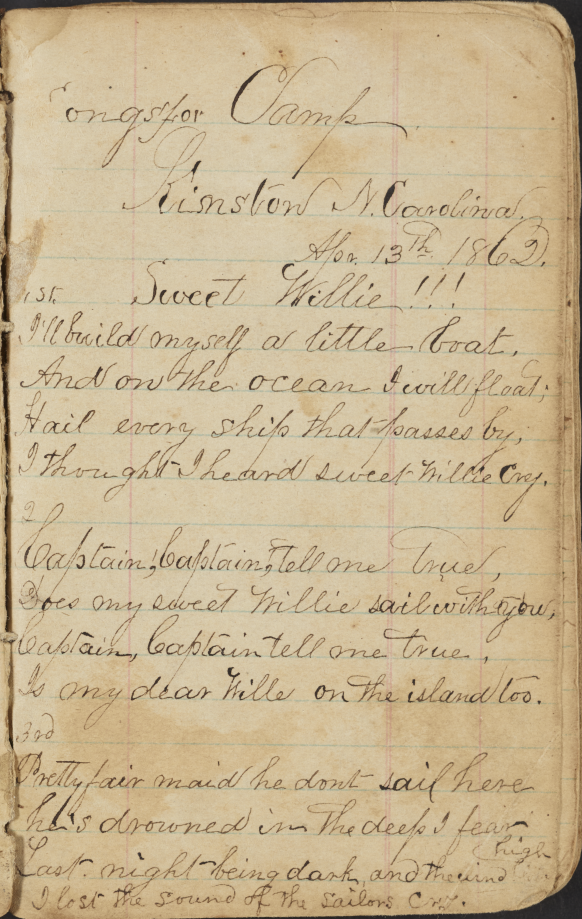 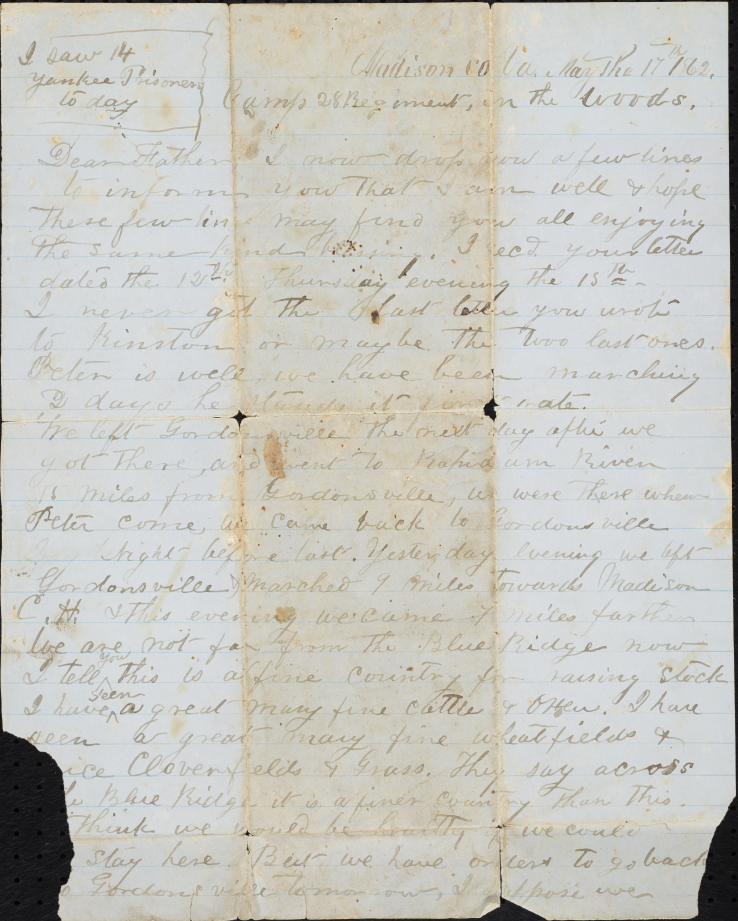 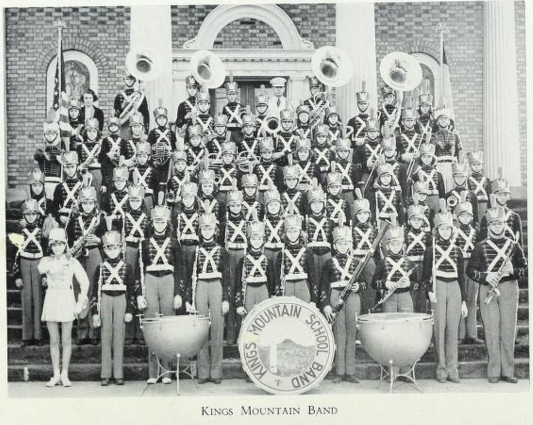 Yearbooks from Kings Mountain High School have been digitized and added to DigitalNC. The yearbooks were provided by Mauney Memorial Library in Kings Mountain, North Carolina. There are 23 yearbooks, titled “Milestones,” from 1939 to 1966. The yearbooks include students, staff, class photos, activities, clubs, athletics, superlatives, and autographs.

You can view more from Mauney Memorial Library at the DigitalNC page or their homepage.

Architectural drawings of Cooleemee Plantation House and a 19th century map of North Carolina from Davie County Public Library have been added to DigitalNC. 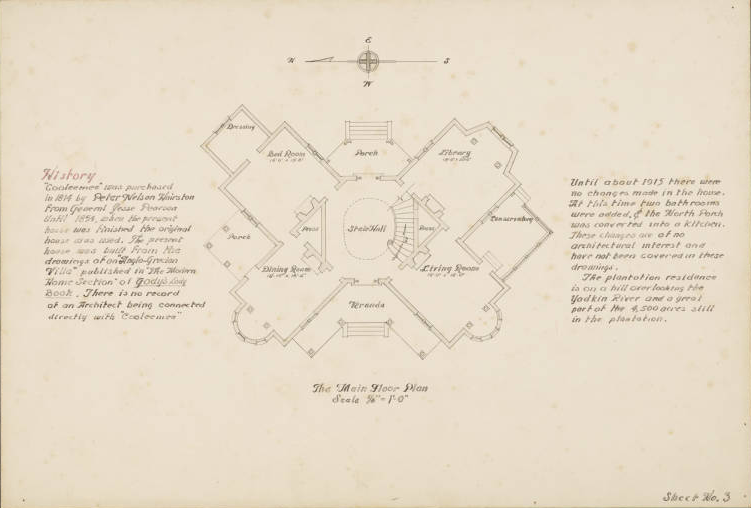 The Cooleemee Plantation House is between Lexington and Mocksville, North Carolina alongside the Yadkin River. Built based on drawings in Godey’s Lady’s Book, the house was completed in 1854. The Hairston family has owned Cooleemee and the plantation since 1814, and in 1978 Cooleemee was dedicated a U.S. National Historic Landmark due to its architecture. There are five architectural drawings of the Cooleemee Plantation House, completed in 1941 by John Erwin Ramsay. One (above) shows the main floor plan, another shows the second floor plan, two depict the front, back, and side of the house, and the last has details of doors, columns, cornices, and ceilings. There are also two photographs of the exterior and interior of the house as part of the plans.

Colton’s Map of the State of North Carolina, 1888. 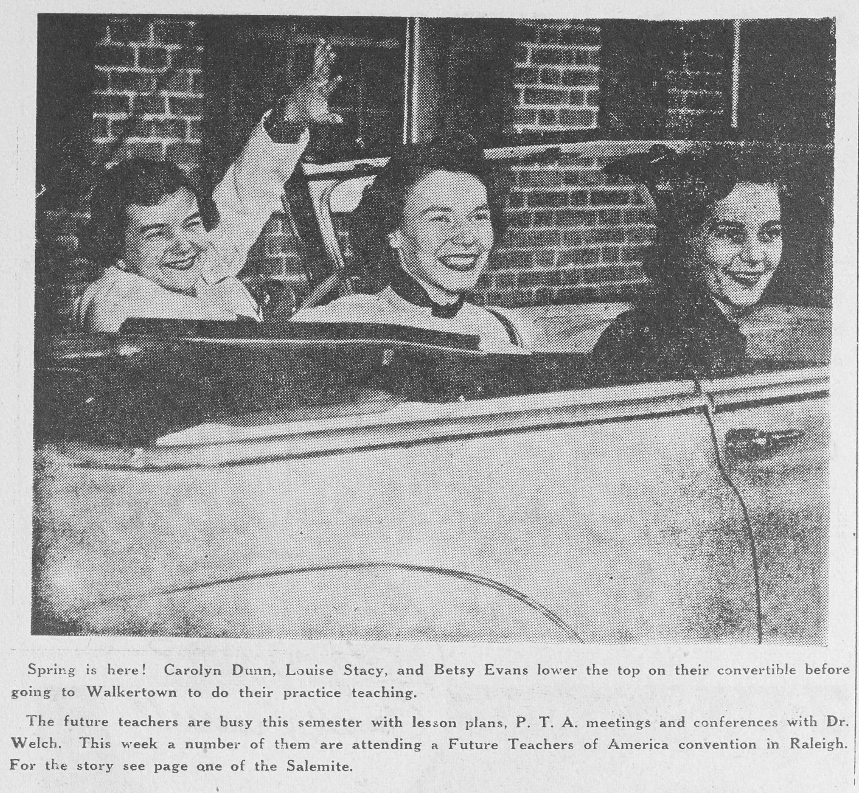 Additional issues of the Salem College student newspaper, called The Salemite, have been uploaded to DigitalNC. The newspapers date from September 24, 1948 to March 3, 1970. The Salemite includes articles ranging from Salem College news to international news, frequently featuring students’ activities both on- and off-campus.

You can browse The Salemite by year, and more materials from Salem College can be found here. 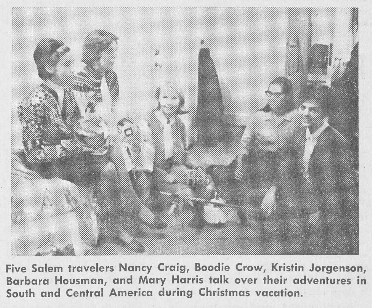 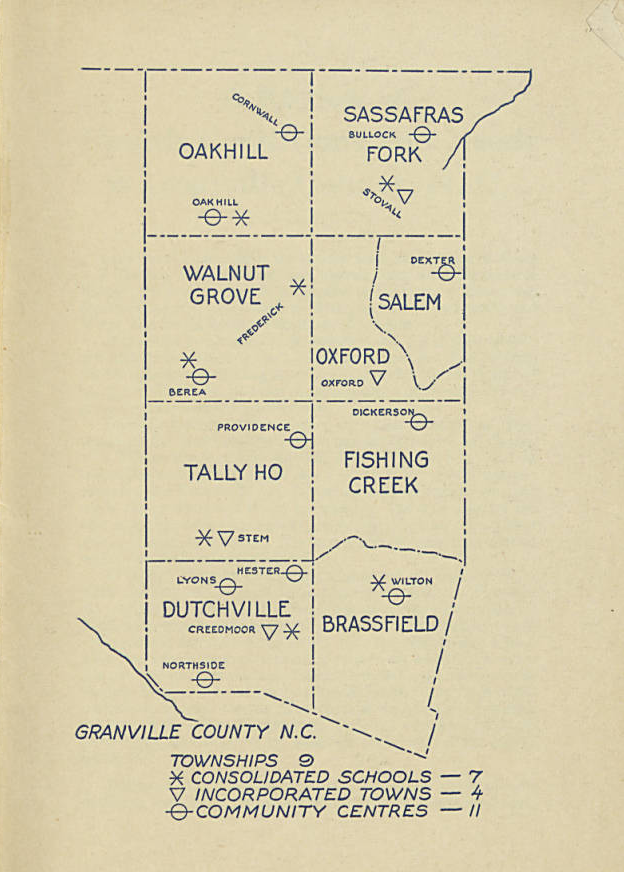 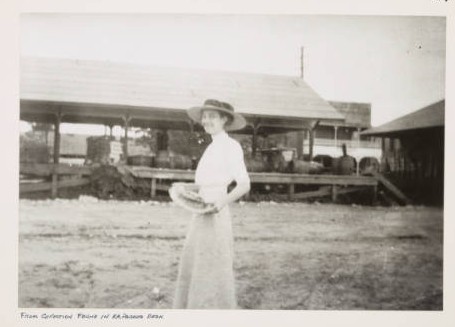 A woman stands in front of a railroad depot with cotton platform.

More photographs from the Benson Museum of Local History have been digitized and uploaded to DigitalNC. Like the photographs added in the past, these show citizens and everyday life in Benson, North Carolina. Many of the people and events are familiar from past uploads. Names such as Barefoot, McLamb, Parrish, and Woodall appear again as well as events like the Benson Singing Convention. 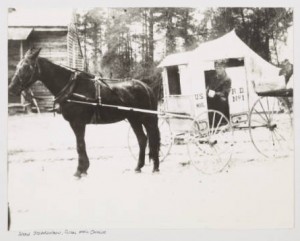 Jesse Stephenson with the mail wagon. 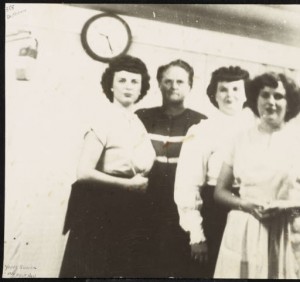 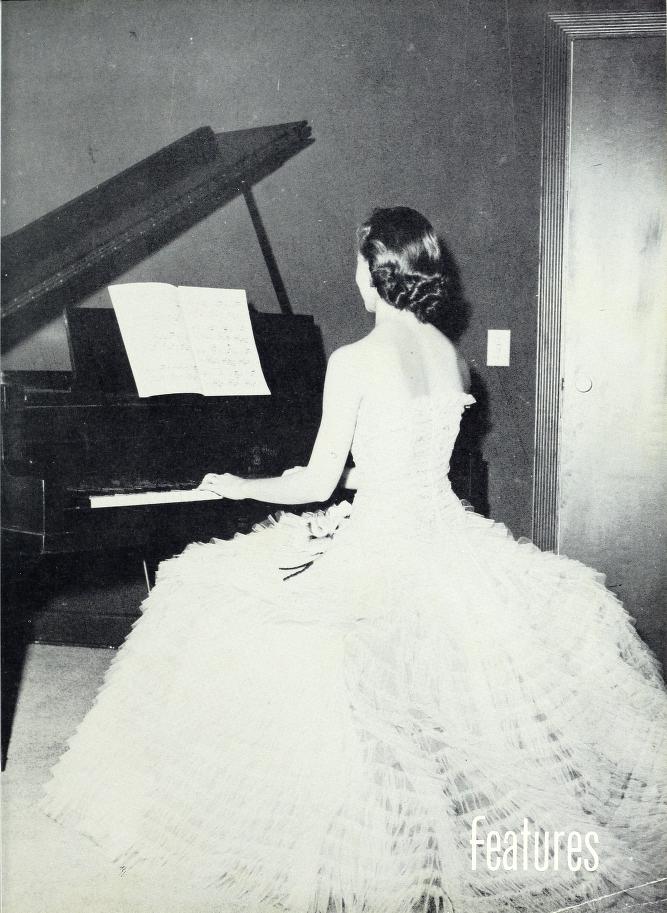 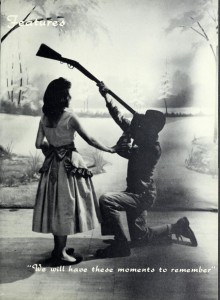 New yearbooks from the Wendell Historical Society have been added to DigitalNC. The 17 yearbooks are from Wendell High School, located in Wake County, NC, and they date from 1943 to 1965. Called “Echoes,” the yearbooks include portraits of students from first grade through senior year and feature candid shots and group shots of clubs and teams. You can view more Wendell High School yearbooks here.