In today’s blog post I offer a break from the current election year with a trip back to the 1968 presidential election. Looking at the political landscape of 1968 is like looking at an earlier but familiar view of the same neighborhood we’re in now. It’s issues resonate today: striving for social and racial equality, debates over America’s place on the world stage. The late 60s were boiling with the turmoil of the Civil Rights Era and the Vietnam War. 1968 alone saw the assassination of Dr. Martin Luther King, Jr. in early April and presidential candidate Robert F. Kennedy in June.

In April 1968, Time magazine held a mock presidential primary at colleges and universities to take the temperature of young Americans during that election year. Dubbed “CHOICE 68,” the event was covered in many of the student newspapers that can be found on DigitalNC, and I wanted to see what this nation-wide event looked like here in North Carolina. 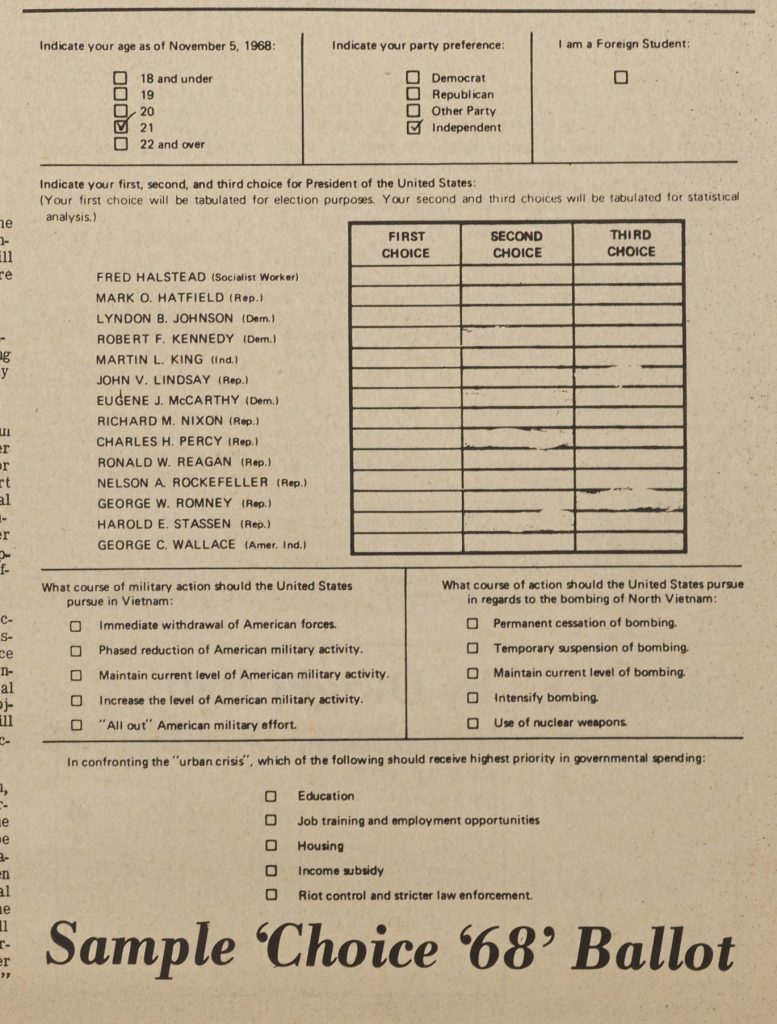 Every American college and university was asked to participate in CHOICE 68. The event was governed by a group of eleven students representing a variety of campuses around the country. Campus groups were in charge of publicizing the event with their peers, under the direction of a campus coordinator. Each ballot (an early draft is shown at right) asked students to rank their top three choices for president and also asked for them to weigh in on Vietnam and the “urban crisis,” the latter of which referred to pervasive concern over poverty, crime, and general unrest in high population urban environments. Write-in candidates were also allowed. Votes from all campuses were tabulated by a UNIVAC computer in Washington, D.C. and the results were supposedly announced on television, with each school’s individual totals being returned during the first week of May.

Before the vote, student newspapers urged their readers to rally against apathy, to prove that young voters could impact the national arena. One Brevard College editorial called on moderates to vote, expressing frustration that liberal and conservative activists had been “hoarding the headlines.” An accompanying editorial talked about the conservatives still being committed to rooting out Communism, revealing lingering echoes of McCarthyism from the late 50s. It predicted a 1968 election win for then Governor of California, Ronald Reagan. 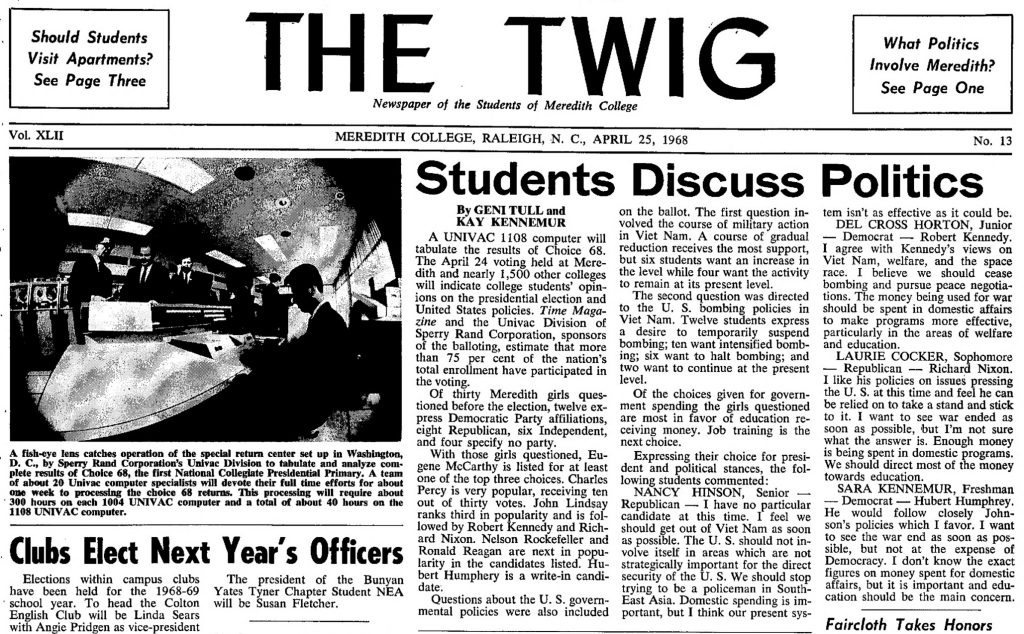 Headline from the April 25, 1968 issue of The Twig, Meredith College.

Some schools had hundreds of participants, with 500 Elon students voting in the mock election. Others had fewer; thirty students were questioned at Meredith College. The Twig quoted opinions from four of those 30 (two Republicans and two Democrats) in the issue seen at right.

Salem College appears to have been one of the most enthusiastic participants, with articles about CHOICE 68 found in issues spanning January through May and a voter turnout of 73% of the eligible student body. The February 23 issue of The Salemite talked about how President Lyndon Johnson endorsed the national mock election despite the fact that “student dissent over the past year ha[d] been directed primarily against White House policies.” The April 12 issue asserted that “massive student participation in CHOICE 68 can and will affect the course of American politics in 1968.”

Almost all articles about the vote mentioned the UNIVAC computation of results, which was seen as heralding a new era in which computers could make generating results faster and more secure. The Meredith College Twig published a photo of the computer tabulating results in its April 25 issue (shown above). Dr. Hammer of UNIVAC posited a time when “a huge data bank may contain ‘voice prints’ of eligible voters” to authenticate those phoning in their votes (“A Letter from the Publisher,” Time, May 10, 1968, page 21).

The national CHOICE 68 vote also saw McCarthy in the lead with 286,000 out of 1.7 million votes from 1,450 campuses. Robert Kennedy (D) and Nixon followed behind McCarthy. Students voted to reduce the United States military presence in Vietnam, and saw education as the biggest key to solving the “urban crisis.”

Though he won the CHOICE 68 vote and continued to be bolstered by student support through the primaries, McCarthy was beaten by Humphrey to gain the official Democratic nomination. The November election was won by Nixon, however the CHOICE 68 voters’ preference for a Democratic candidate was somewhat predictive: Humphrey prevailed with voters under 30 in the general election.

As far as I can tell, no nationwide poll quite like CHOICE 68 has been held since, though speculation over how college-aged Americans will vote certainly hasn’t changed. If you’re interested in other historical election news and opinion as reported by student newspapers, visit the North Carolina Newspapers collection. 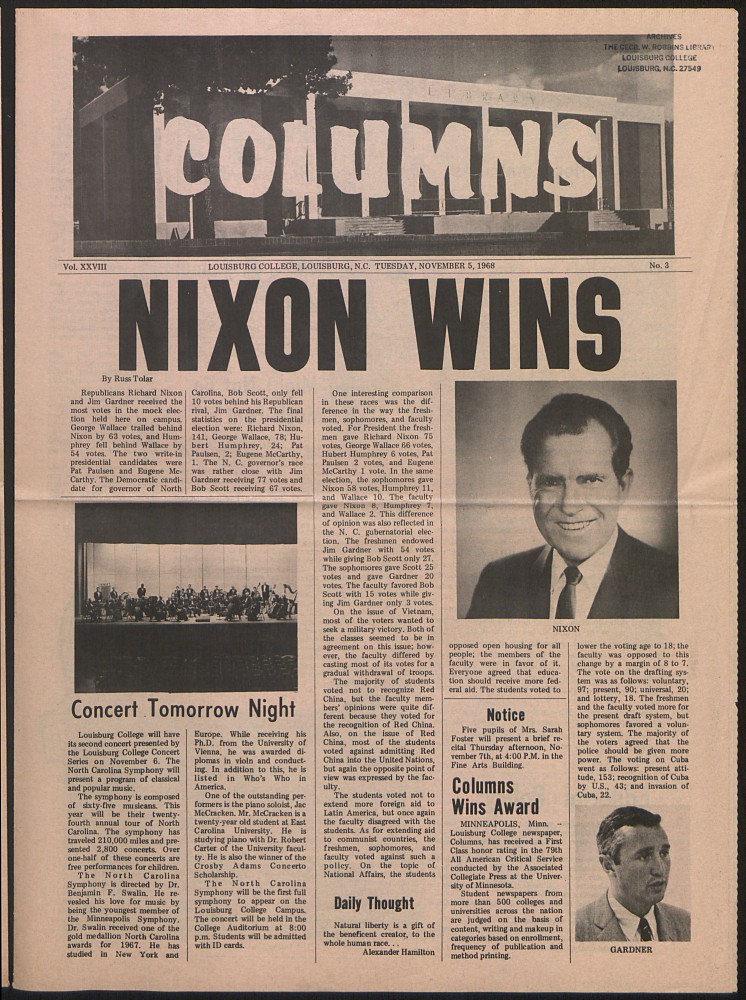 *It appears that the following schools also participated in CHOICE 68 based on mentions in newspapers and yearbooks, but no results were found: Appalachian State University, High Point College, Lees-McRae College, Lenoir-Rhyne College, Queens College, and University of North Carolina at Greensboro.