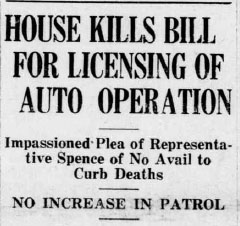 Today’s headline from the @ncnewspapers Twitter feed reads “House Kill Bill For Licensing Of Auto Operation.” I suppose I’d always taken it for granted that a license from the state was necessary for driving a car; certainly I would have thought that they would be in place by the 1930s.

The bill, according to the article in the March 27, 1931 Pilot would “require operators of motor vehicles to be licensed by the state. . . The bill was sponsored by the Carolina Motor Club and had the support of most of the state press, aroused by the growing automobile death rate in the state.”
So what could be the objection?  In language reminiscent of many of today’s political arguments, the bill was opposed by representatives who saw licensing drivers as a ploy by the state to increase taxes and add more officers to the government payroll.  Apparently a representative Allen of Granville was one of the leaders in defeating the bill.  The article in the Pilot closes with a great quote: “The 10 commandments would have a hard time passing Mr. Allen if there was a new executive officer required in their administration.  He would move to table them if they were not introduced with ample safeguards against extra expense.”