Today’s post is the result of a chance quote and a successful collaboration. We’re pleased to add to DigitalNC the earliest newspaper published by and for North Carolina African Americans – the Fayetteville Educator – along with another early African American newspaper, the Charlotte Messenger.

The North Carolina Digital Heritage Center’s partners have shared a really robust collection of African American papers, and we’re always searching for more. In addition to what’s on DigitalNC, we’re familiar with other well known early papers like the Star of Zion — one of the oldest (1876) as well as the longest continuously running paper in the state. On DigitalNC you’ll find another early paper, the National Savings Bank. Published in 1868, the paper featured advertising and news related to the banking industry. It was published for African Americans from a number of locations around the U.S., including New Bern. The content is mostly syndicated across all of its issues and it was intended for a national audience. 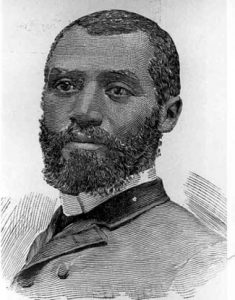 An engraving of William C. Smith from Penn’s The Afro-American press and its editors.

Earlier this year, while reading about African American newspaper editor, William C. Smith, we ran across this quote:

He was one of the founders of The Fayetteville Educator, the first newspaper edited and published by colored men in North Carolina.*

The Educator wasn’t a paper we had run across before. After a few inquiries, we found two institutions who were familiar with the paper. The Harvey B. Gantt Center for African-American Arts + Culture in Charlotte has been stewarding original copies of the Educator – possibly the only extant copies – as well as the Charlotte Messenger for years. They had shared microfilmed copies of both papers with one of our partners, the Charlotte Mecklenburg Library, which had cataloged that microfilm into their catalog allowing us to find it online. Thanks to the cooperation of both of those organizations, we’re happy to share these newspapers on DigitalNC today.

Founded by William C. or W. C. Smith, the Fayetteville Educator ran for a single year – September 26, 1874 through September 25, 1875. The first issue states that the paper’s “efforts will be directed to training the intellectual and moral sentiment of our youth” and that it is “printed and edited by colored young men.” The paper does include reports of the actions and events of the A. M. E. Zion church in North Carolina as well as many moral and anecdotal stories, poetry, and lifestyle recommendations for young men. However, it is also Republican in sentiment during a time when the North Carolina Republican party was trying to stave off disenfranchisement of the African American community by their Democrat counterparts.  In the first issue, the paper states that, while “indebted” to the Republican Publishing Company, the paper hoped that “others of different political faith show that they too are friendly.” The paper was eventually suspended because it considered its work complete and because it lacked patronage to continue: 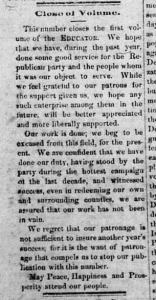 “We are confident that we have done our duty, having stood by the party during the hottest campaign of the last decade, and witnessed success, even in redeeming our own and surrounding counties, we are assured that our work has not been in vain. We regret that our patronage is not sufficient to insure another year’s success…” September 25, 1875, page 2, pictured at right.

The work Smith refers to was keeping governmental control out of Democrat hands. Unfortunately, he called a premature success as less than a month after the final issue Democrats slyly eked out a narrow majority in the Convention of 1875. In the following years North Carolina Democrats implemented a number of laws that either overtly or obliquely upheld racism in the state’s political and social systems.

While the Educator was never revived, William C. Smith went on shortly thereafter to begin another newspaper, the Charlotte Messenger. The same book cited above, which mentioned the Educator, describes the Messenger as a paper that fought “against intemperance, immorality, and all other evils coming its way.”** Reading from the salutatory message on the second page of the first issue you’ll see many similarities from the Educator.

In presenting this little sheet to our people, it is hoped that they will appreciate it as an honest effort on our part to promote the moral, intellectual and material standing of our people. We are aware of the difficulties and responsibilities attending the publication of a newspaper; but seeing the great need of an organ in this section to defend the principles of the Republican party; the need of an exponent of the rights of the colored people, we have undertaken the task and shall depend upon the wisdom and kindness of our friends to encourage and support us.” 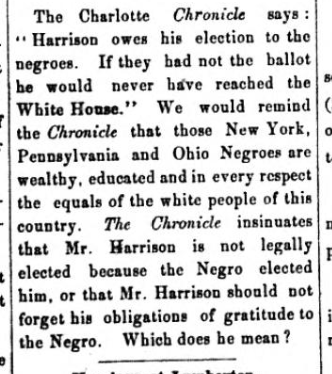 The Messenger began on June 17, 1882 and continued at least until 1891. The microfilmed issues that we’re able to share last from the June 17, 1882 issue through January 5, 1889. Issues include syndicated news from big city papers and other areas of the south, as well as the traditional repeated poetry, short stories, and advice found in many newspapers at this time period. But you’ll also find the regular “Fayetteville Notes” and other areas of that paper highlighting local news. Temperance is a continuous theme, as are other tenets of the Republican party at that time. The editors occasionally commented on news printed in the Charlotte Chronicle, the Messenger’s contemporary, like the example at right which mentions the 1888 election of President Benjamin Harrison.

We hope you’ll take a chance to delve into these two papers and the other African American newspapers on DigitalNC.

Images of Alamance County from the late nineteenth to early twentieth century are available now!