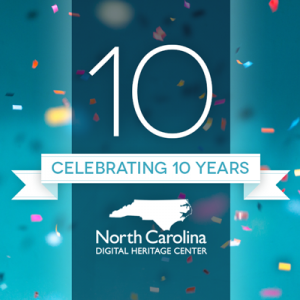 It’s DigitalNC.org’s 10th birthday! Though we had hoped to be in the office celebrating, we’re still taking time to look back at years of hard work and the collaborative spirit that makes the North Carolina Digital Heritage Center (NCDHC) what it is!

To date, NCDHC has partnered with 273 libraries, museums, alumni associations, archives, and historic sites in 98 of North Carolina’s 100 counties and we’re growing all the time. Our website currently includes 4.2 million images and files. We share this accomplishment with every institution we’ve worked with. We’d never have gotten to 10 years without staff (permanent, temporary, and student!), our partners, or the network of colleagues all over North Carolina who have encouraged, advised, and supported our work.

As we approached our anniversary, we realized that our website lacked a synopsis of how NCDHC came to be, and our history. So read on for a brief look at how we got started and our major milestones.

The North Carolina Digital Heritage Center was one outcome of a comprehensive effort by the state’s Department of Cultural Resources (now the Department of Natural and Cultural Resources) to survey and get a broad overview of the status of North Carolina cultural heritage institutions. That effort was entitled NC ECHO (North Carolina Exploring Cultural Heritage Online) and was funded by the Institute of Museum and Library Services (which also supports us – thanks IMLS). A major goal of NC ECHO was a multi-year needs assessment. NC ECHO staff visited hundreds of cultural heritage institutions throughout the state to collect data and interview curators, librarians, volunteers, archivists, and more. Many of our partners still remember their visits! 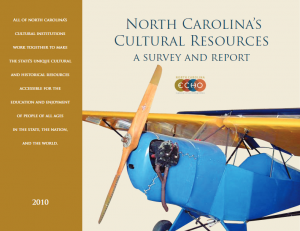 Data collected at these site visits was combined with survey responses to reveal a “state of the state,” summarized in a 2010 report, cover pictured at right. The assessment revealed a lot but, specific to digitization, staff found that nearly three-quarters of the 761 institutions who completed the survey had no digitization experience or capacity. Members of the Department of Cultural Resources (which includes the State Library, State Archives, and multiple museums and historic sites) began brainstorming with other area institutions about a way to help efficiently and effectively provide digitization opportunities. While the NC ECHO project offered digitization grants, workshops, and best practices, an idea emerged of a centralized entity that could assist institutions that didn’t have the capacity to do the work in house. The State Library of North Carolina and UNC-Chapel Hill Libraries joined together to create such an entity: the North Carolina Digital Heritage Center. The Center would be located in Chapel Hill, taking advantage of its central location and the digitization equipment and expertise already available in Wilson Special Collections Library. The State Library would provide funding, guidance, and ongoing promotion and support of the Center’s services.

At its beginning, the Center’s staff digitized small collections of college yearbooks, needlework samplers, postcards, and photographs and made them available through DigitalNC.org. They went to speak with organizations interested in becoming partners, and began taking projects for digitization. Here’s a list of NCDHC’s earliest partners, who came on board during late 2009 and 2010.

Though we’re not positive of the exact date, we believe DigitalNC.org launched on or near May 12, 2010. Here’s a look at that original site! 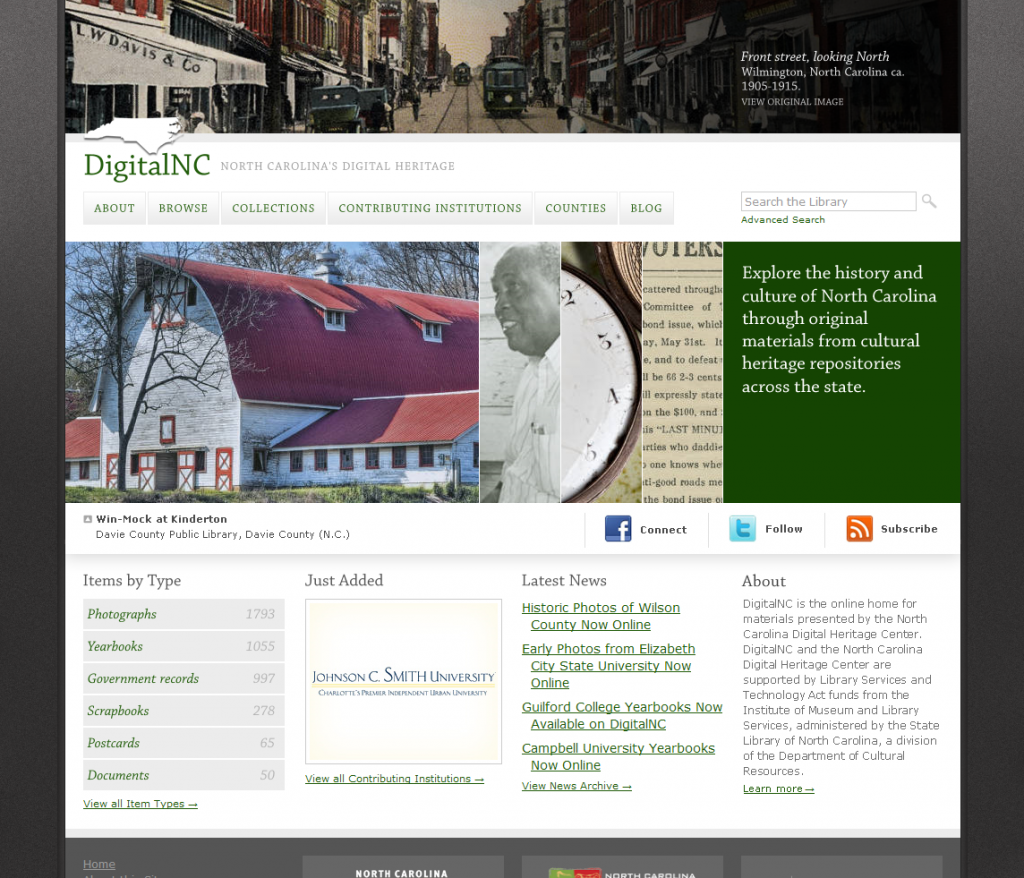 In 2011, word about the Center spread. Staff started responding to demand from partners, incorporating newspaper digitization. In late 2012, also in response to popular demand, the Center began digitizing high school yearbooks. Yearbooks and newspapers are some of the most viewed items on DigitalNC, and they remain a significant portion of our work to this day.

In 2013, NCDHC joined the Digital Public Library of America (DPLA) as North Carolina’s “service hub.” The DPLA collects information from digitized collections all over the nation and provides it together in one searchable interface at dp.la. Because of our participation, users can browse and search for collections from North Carolina alongside items from institutions around the country.

Throughout the years, we’ve tried to expand services to fit our partners’ goals. In 2015, we trialed an audiovisual digitization project that incorporated the first films into DigitalNC. Today, we partner with the Southern Folklife Collection at Wilson Special Collections Library to provide audio digitization on an ongoing basis. In 2016, we added a new partner category – alumni associations – to support more digitization of African American high school yearbooks and memorabilia. The following year, we announced a focus on digitization of items documenting underrepresented communities. We also started going on the road with our scanners! For institutions that don’t have the staff time or resources to travel to Chapel Hill, we offer to come for a day or two and scan on site.

2018 and 2019 saw several major milestones. We were nationally recognized as an Institute of Museum and Library Services National Medal finalist, and we began a major software migration. Both were a tribute to the size and extent of our operation, though in different ways. As we’ve approached our 10th anniversary we’ve focused on working with partners in all 100 of North Carolina’s counties. Whether you’re rural or metropolitan, we believe your history is important and should be shared online.

One of the ways we’re commemorating this anniversary is to ask our partners and stakeholders how they think we’ve impacted them and their audiences. Join us here on the blog in the second half of 2020 as we share these brief interviews, reflect, and celebrate. Thank you for reading, enjoy the site, and here’s to another 10 years of making North Carolina’s cultural heritage accessible online!

Quarantine Club: A Retrospective of the 1918 Influenza Pandemic Through North Carolina Students