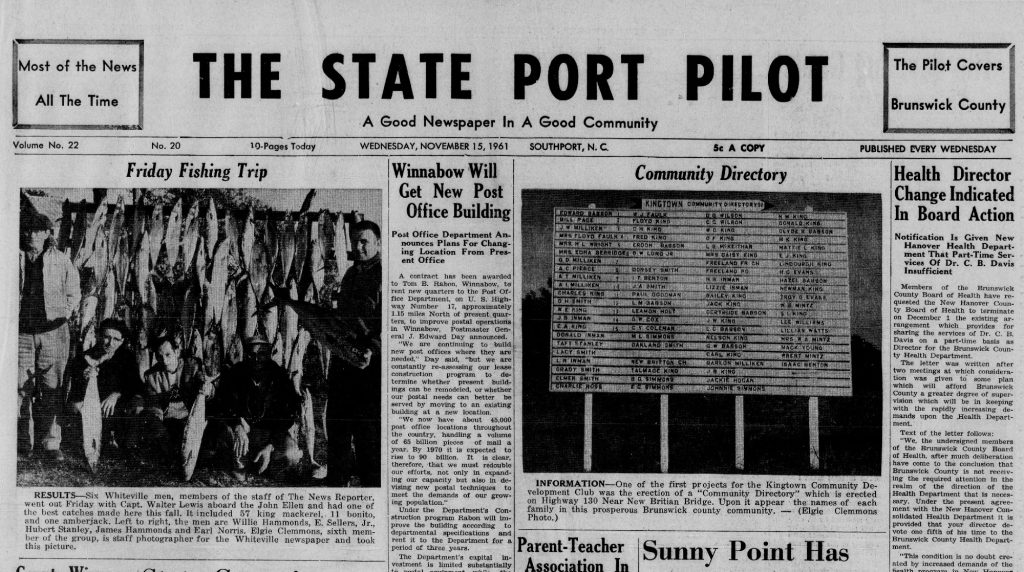 This November 15, 1961 front page of The State Port Pilot has a picture of the catch from a local fishing trip and an image of a Kingtown Community Directory sign that lists the names of Kingtown N.C. residents.

Issues of The State Port Pilot newspaper dating from 1950-1962 have been added to DigitalNC.org thanks to funding provided by the Southport Historical Society. These join issues from 1935-1949.

The State Port Pilot, “a good newspaper in a good community,” documents Brunswick County NC life. Agriculture (especially tobacco) and fishing are frequent front page topics during this time period, and there are “local catch” photos at least every month. Front page news often includes information about local development, such as the construction of the Sunny Point army depot. You will also find coverage of some of the county’s most devastating events of this timer period, including Hurricane Hazel in 1954, and a National Airlines plane crash that killed 34 people in 1960. 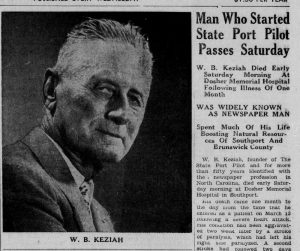 On the front page of issues from through April 1957 you’ll find a regular column entitled “Our Roving Reporter.” This column was written by W. B. Keziah, also known as Bill Keziah, and it was published right up until his death. According to his obituary Keziah was the newspaper’s founder who transitioned to a local reporter known for his commentary and deep love for Brunswich County. Keziah’s columns include everything from the blooming of local camellias, to visits from state and local dignitaries, to gossip, to little-known county and town history. He was a native of Waxhaw and, as a deaf individual, had attended the NC School for the Deaf in Morganton. Numerous comments about his contributions to the county can be found in issues of the Pilot published around the time of his passing.

You can view all of the issues of the State Port Pilot on the newspaper title page.