The Tryon Daily Bulletin’s tagline is the World’s Smallest Daily Newspaper. This masthead is from Aug 15, 1945, with Seth M. Vining as editor.

Issues of the Tryon Daily Bulletin from 1935-1936 and 1942-1951 have been added to DigitalNC, thanks to funding from the North Caroliniana Society. This title was recommended and advocated for by the Polk County Public Library.

The Bulletin is a physically smaller paper both in dimensions and page length, and it actually boasts the tagline “The World’s Smallest Daily Newspaper” to this day. Despite (or perhaps because of) its size, the Bulletin focus mostly on local news. You’ll find items about church, school, and sporting events, and articles about marriages, illnesses, births and deaths without many syndicated articles or ads to sift through. As a daily, the paper covered smaller details than you might normally see, as specific as a list of books added to the library. 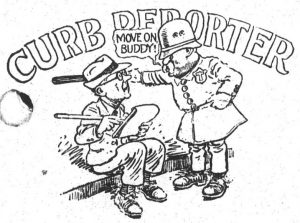 The Curb Reporter column graphic beginning in the mid 1940s.

The issues scanned from 1942-1951 cover World War II and its immediate aftermath. Unlike many of the Bulletin’s peers, the front page doesn’t focus on national news but rather the war’s impact on the local community. There are calls for donations of items for soldiers, articles announcing events for soldiers visiting from Camp Croft (which was located near Spartanburg, SC), and lists of Tryon-area soldiers and their comings and goings. The paper features a regular front page column called “Curb Reporter” which is a compiled list of brief local, national, and international news items.

You can view all of the issues we’ve scanned of the Tryon Daily Bulletin on the newspaper’s landing page. All of the items we’ve scanned on behalf of the Polk County Public Library can be found from the Library’s contributor page.