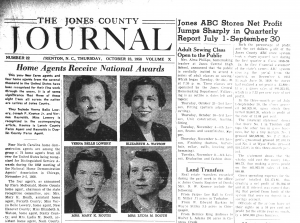 Thanks to a nomination from the Neuse Regional Library, we’ve added 1,098 issues of the Jones County Journal, a newspaper published out of Trenton, N.C. This is one of only two newspaper titles we have for Jones County. Issues date from volume one, number one, published in 1949 through April 1971. Because the Journal was digitized from microfilm shot with high contrast, many of the photographs are not very clear but the text is quite sharp.

The tagline for the paper when it began through 1954 was “A Better County Through Improved Farm Practices” and much of the news in the earlier years revolves around agricultural methods and needs. There are also editorials,  personal news columns, and coverage of local events from election results to church picnics and barbecues. There’s quite a bit of coverage of the more populous Lenior County, perhaps in part due to the fact that the paper was published by The Lenoir County News Company.

The Journal is focused on local news, from the front page on. For a number of years Maysville and Trenton have their own sections. Reporters describe national and international events through their impact on Jones County residents. For example, following the assassination of President John F. Kennedy, the front page headline reads “Trenton Area Shares Nation’s Shock on President’s Murder.” Coverage of the Vietnam War is shared in the same way, like the Jones County veteran given half of the newspaper’s front page to describe his experience. Papers full of this kind of unique local reporting, with little to no syndicated content (content that a publisher paid for and was reused in newspapers throughout the world), are especially vital for research.

Digitization of the Jones Journal was possible thanks to generous funding from the North Caroliniana Society. You can find more materials we’ve scanned on behalf of the Neuse Regional Library on their contributor page. You can search thousands of issues of North Carolina newsppaers from all over the state using our  Newspapers landing page.