Home · Blog · Looking Back at DigitalNC... 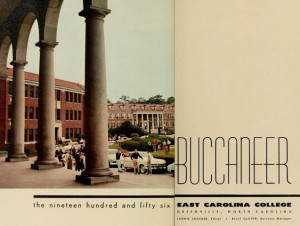 Title page from the 1956 Buccaneer, from East Carolina College, the most popular item on DigitalNC.org in 2014.

The North Carolina Digital Heritage Center had a great year in 2014. We continued to work with partners around the state on digitization projects and added a wide variety of material to DigitalNC.org, making it easier than ever for users to discover and access rare and unique materials from communities all over North Carolina.

As we look back on our work over the past year, I wanted to share some of what we’ve learned by looking at our website usage statistics. Like many libraries, the Digital Heritage Center uses Google Analytics to capture information about what’s being used on our website, who’s using it, and how they got there. While there are still lots of questions remaining about usage of DigitalNC, these stats do give us a lot of valuable information.

In 2014, more than 250,000 users visited DigitalNC.org, resulting in more than 1.8 million pageviews. While people visited our website from computers located all over the world, the greatest number by far came from North Carolina. That’s what we expected and hoped to see. More than 200,000 sessions originated in North Carolina, with the users coming from 388 different locations, ranging from over 18,000 sessions in Raleigh and Charlotte to a single visit from the town of Bolivia in Brunswick County (user location is determined by the location of their internet service provider, so this may not tell us exactly where our users are located, but it’s going to be close in most cases).

What did people use on DigitalNC? We were not surprised to find that the most popular collection remains our still-growing library of yearbooks. The North Carolina Yearbooks collection received more than 125,000 pageviews alone, followed by newspapers (44,000) and city directories (11,000). And we were pleased to learn that at least somebody is reading this blog, which received nearly 2,500 pageviews last year. The most popular blog post was our announcement about the digitization of a large collection of Wake County high school yearbooks. 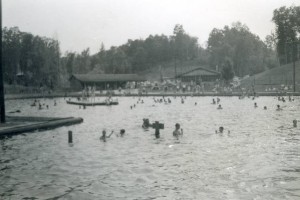 The most popular image on our site was from the Davie County Public Library:  a black-and-white photo from the 1950s showing swimmers at Lake Hideaway in Mocksville. Other popular photos included a postcard showing the American Tobacco Company plant in Reidsville, N.C., a group of Stanly County students from 1912, and a portrait of Charles McCartney, the infamous “Goat Man” from the 1950s.

The variety of subjects, locations, and time periods in these photos is representative of the wide-ranging content available in North Carolina’s cultural heritage institutions and on DigitalNC.org. We are honored and excited to have a role in making this content accessible to everyone and look forward to sharing even more of North Carolina’s history and culture online in 2015.

← Favorite Stops Along the Road in North Carolina