We’ve recently added more issues of the Africo-American Presbyterian (Wilmington, N.C.) from 1925 to 1938 thanks to our contributors UNC Chapel Hill and Johnson C. Smith University. These editions also offer more regular coverage since we’ve been able to add one from nearly every week in this period.

One notable article from the August 20, 1891 issue (from an earlier batch) gives us insight into some of the peculiar medical practices that shaped how we think about addiction today. The headline reads, “Dr. Keeley’s Cure for Drunkenness.”

The treatment proposed here is to inject “bi-chloride of gold” four times a day as an “antidote” to the “disease” of drunkenness. The author of this article compares it to using quinine to treat malaria and mercury to treat syphilis (no longer recommended).

Wilmington wasn’t the only city excited about Keeley’s cure; Leslie E. Keeley actually opened his first clinic in Dwight, Illinois and advertised his cure heavily. By 1892, there were over 100 Keeley clinics throughout the U.S. and Europe reportedly treating 600 people per month.

As chemistry buffs may know, “bi-chloride of gold” would be called dichlorogold today, and it is not used to treat drunkenness or alcohol poisoning. The name seems to have been a bit of a misleader anyway, since Keeley’s real recipe was a mystery. This led the medical community to be a bit more skeptical of Keeley, and his medical license was revoked in 1881 (though it was reinstated a decade later due to procedural issues).

Despite the unreliability of Keeley’s particular recipe, he was one of the first doctors to popularize the idea that addiction is a bodily disease rather than a personal failing.

“The weak will, vice, moral weakness, insanity, criminality, irreligion, and all are results of, and not causes of, inebriety,” Keeley wrote.

And aside from the injections, Keeley’s approach to treating addiction was unlike most methods of the time. According to the article in the Africo-American Presbyterian, patients received the injection “in their own rooms at prescribed hours,” suggesting that they received personal treatment. Some have suggested that a placebo may have also accounted for the success of the treatment; Keeley boasted of 60,000 “graduates” of his program by 1892, indicating its widespread popularity.

Whatever the reasons for his success, Keeley seems to have enjoyed popularity among the Christian publications of North Carolina. 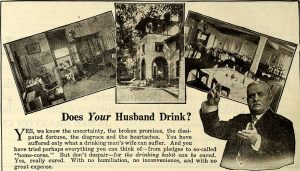 An advertisement for the Keeley Institute in Greensboro, N.C. (1910)

1958 Was a Big Year for Chapel Hillians, According to Added Issues of the Chapel Hill News Leader