Some of the missing issues of The Carolina Times from 1979-1982 have been added to Digital NC thanks to our partner, the University of North Carolina at Chapel Hill.

In these recently uploaded issues, it’s clear that the paper is committed to voicing some of the experiences of Black citizens of Durham in the late ’70s and early ’80s. One way that the paper celebrates Black history is through the “Things You Should Know” Continental Features, which briefly note the accomplishments of important historic figures. 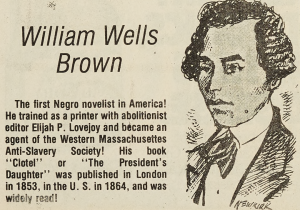 Some of the cartoon faces in these features may already seem familiar to you, such as novelist William Wells Brown, the white philanthropist Julius Rosenwald (known for his financial support of “Rosenwald schools”), and Nicholas Biddle, the first Black Union soldier wounded in the Civil War. Others, it seems, haven’t persisted into our collective memory as strongly, though the paper makes a case for them. 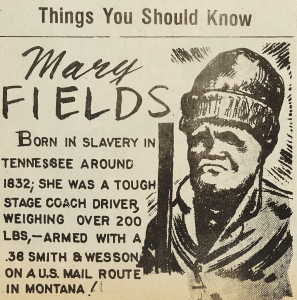 One such figure is Mary Fields, apparently the first Black woman to be a star route mail carrier on behalf of the U.S. Postal Service. As her feature suggests, she was sometimes known as “Stagecoach Mary” due to her usual mode of transportation. But Fields didn’t set up her own mail route until she was 60 years old; before that, she worked on board the first Robert E. Lee steamboat (made famous by its race on the Mississippi) and served as the forewoman at St. Peter’s, a Catholic mission in Montana. Other sources confirm that she was incredibly strong and stood around six feet tall.

Though she encountered conflicts in her life and work, Fields was beloved in the community of Cascade, Montana; the town apparently closed schools each year to celebrate her birthday, and she was sometimes exempt from rules governing women. She passed away in 1914 and was celebrated with one of the largest funerals in the town’s history. 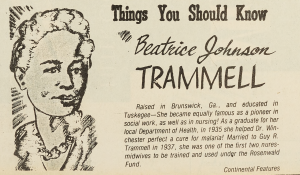 Another, even more mysterious figure is Beatrice Johnson Trammell. This blurb has pretty much all the information available about her that can be found with cursory internet searches, and the same is true for the others connected to her in the article. But apparently, she was known well enough in 1982 for someone to include her in the series.

You can see all available issues of The Carolina Times here or browse our North Carolina Newspaper collection by location, type, and date. For more information about UNC Chapel Hill and its library holdings, you can visit their partner page or their website.