A new title has been added to our Newspapers of North Carolina Collection thanks to the Outer Banks History Center. These issues of The Nags Tale, a cleverly-named paper from Nags Head, N.C., contain coverage from July and August 1938.

On of the first major news stories on the front page of this paper is a review of the local rendition of Paul Green’s The Lost Colony, first performed about a year earlier. The play is based on the true story of the lost colony of Roanoke Island in Dare County, N.C. (neighboring Nags Head). 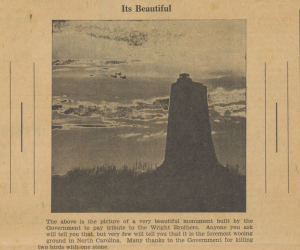 The Wright Monument, or what the caption writer calls, “the foremost wooing ground in North Carolina.”

The reviewer notes, first and foremost, the incredibly large cast of the production, commenting, “There are 186 people in the company of ‘The Lost Colony,’ and when Sir Walter’s colony passed through an inlet that cut the banks between Nags Head and the Wright Memorial, there were only 108 people in the expedition come to lay the foundation of an empire.”

Despite the unusually large cast (which doesn’t include the crew members, the reviewer points out), the production seemed to be a hit among the residents of the island.

You can see all available issues of The Nags Head here or browse our Newspapers of North Carolina Collection by location, type, and date. To see more materials from the Outer Banks History Center, you can visit their partner page and their website.