Mascots are a complicated phenomenon. They inspire a spectrum of reactions: ridicule, ambivalence, or fierce loyalty. With thousands of yearbooks online, all of us here at the Digital Heritage Center have probably spent more time looking at yearbooks than anyone else you’re likely to meet. Mascots are a common theme.

I’ve been working on today’s post for quite some time; unable to find a history or comprehensive list of mascots in North Carolina I decided to compile one myself. So here’s a stab at a college mascot overview, drawn from yearbooks and other campus publications. Let me know what I’ve missed or gotten wrong!

In the early 20th century, schools frequently chose children as mascots or sponsors, whether for a sports team or for a particular class. The earliest example we’ve found on DigitalNC is from a 1910 publication by Atlantic Christian College (now Barton College) in Wilson, which shows Elizabeth Settle Caldwell as the Senior Class sponsor. 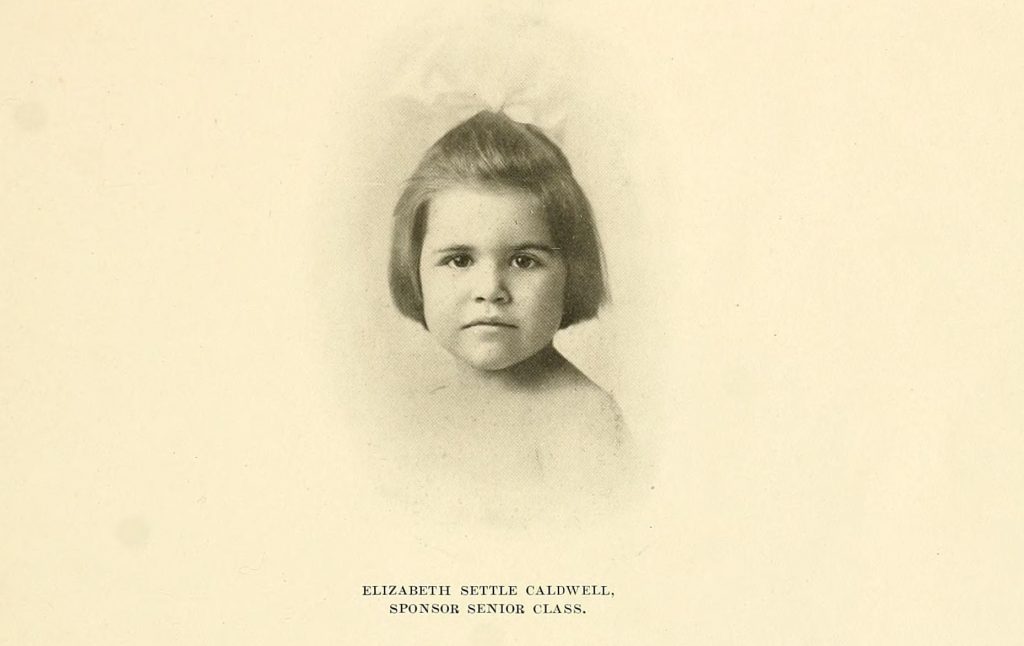 Ms. Caldwell was the daughter of Jesse Cobb Caldwell, the college president. From what we’ve been able to tell, children mascots were frequently younger siblings of students, teachers, or others associated with the school. Students mention that Ms. Caldwell brought “solace to many a lonely, homesick heart” and this may be why children were chosen – to foster a feeling of family and comfort among students. We’ve seen several references to mascots being elected or being chosen through competition, although what this might be we haven’t been able to discover. The trend of choosing children as mascots seems to continue through the 1960s. The latest one we found is Dawn, the Senior Class mascot at Peace College (now William Peace University) in 1966.

Animal mascots span schools across the state, whether it’s Rameses at UNC-Chapel Hill or WCU’s Catamount. The bulldog and different types of cats win out as most frequently adopted. Pictures of live animal mascots start to appear in yearbooks in the early 1900s, and continue today although much less frequently. For a variety of reasons, including concerns expressed by animal rights activists, schools have shifted away from actual animals to students dressing up like animals, as you’ll see later on in this post. 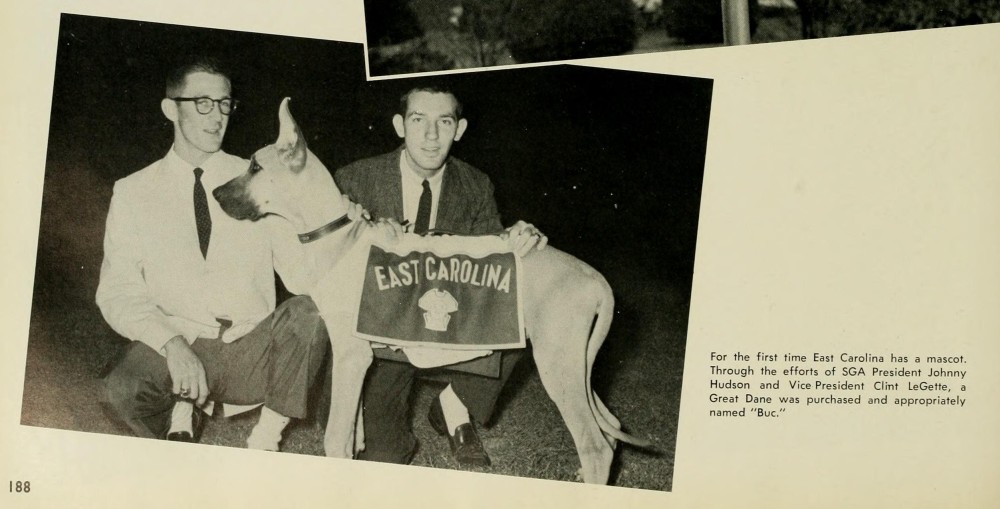 While about half of the four-year college mascots in North Carolina are animals, most of the others are characters that are historic, mythical, or extraordinary in nature. From what I’ve seen in NC yearbooks, humans dressing up as the school mascot really got traction in the 1960s. Initially, these costumes weren’t the fuzzy creations we think of today, but rather less complicated ensembles where the mascot’s identity (his or her face and body) was often apparent. Yosef the Mountaineer, beloved icon of Appalachian State University, was created sometime around 1942 and looked like this in the 1960s: 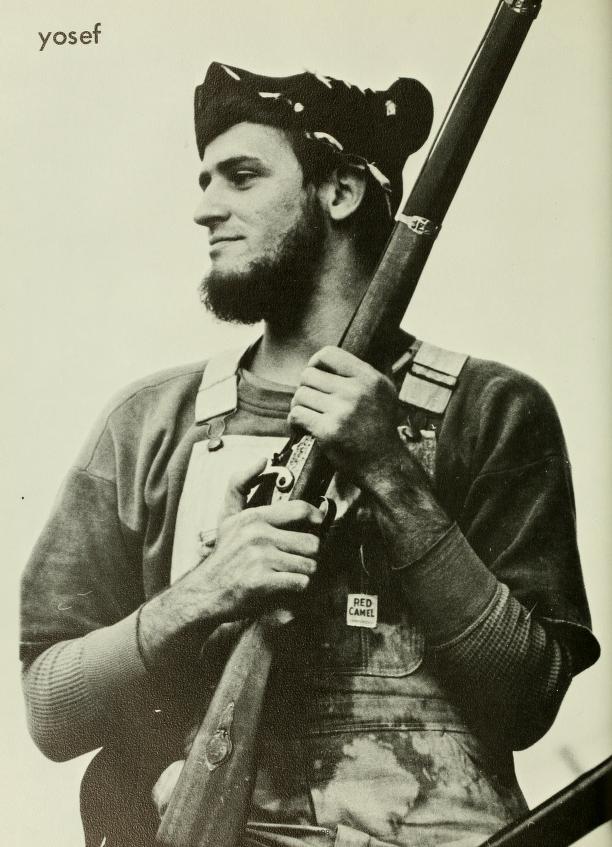 Yosef the Mountaineer, aka James Randle Tedder (we think). From the 1969 Rhododendron yearbook, Appalachian State University.

One of my favorites has to be this picture of Duke Blue Devil, from 1950: 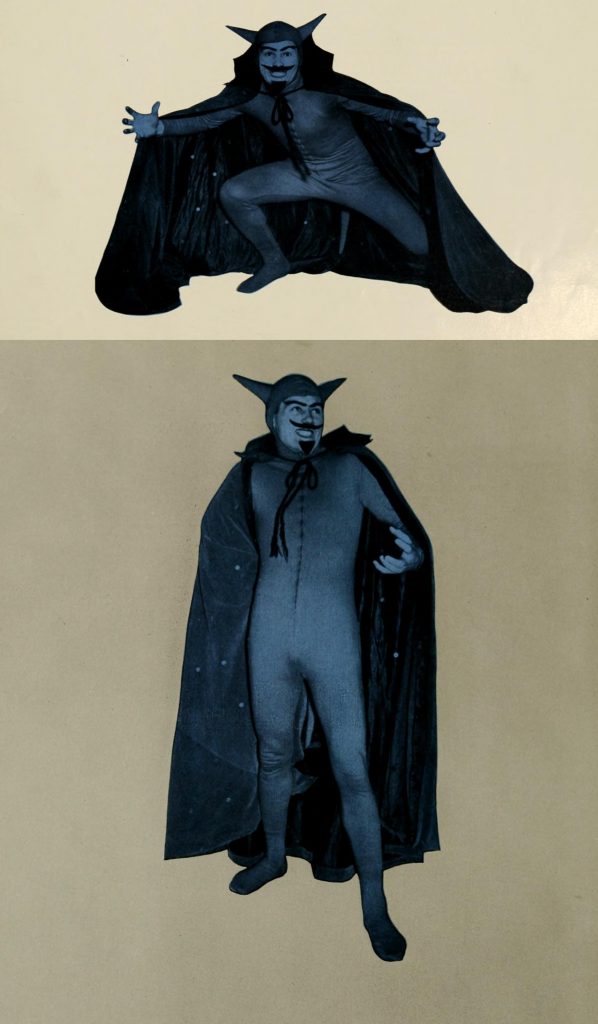 The Blue Devil. From the 1950 Chanticleer yearbook, Duke University.

Perhaps it was too hard to maintain a degree of consistency as students graduated over the years, and mascot anonymity seemed like a better idea. Whatever the reason, you start to see fuzzy, oversized costumes with gigantic headpieces in the late 1970s.

Whether animal or character, plush mascots that include a single piece body suit with a large plastic or cloth-covered head is something most Americans can identify with, thanks to professional sports. Colleges in North Carolina really embraced these costumes through the 1980s. Here’s what the UNC-Wilmington Seahawk looked like in 1987: 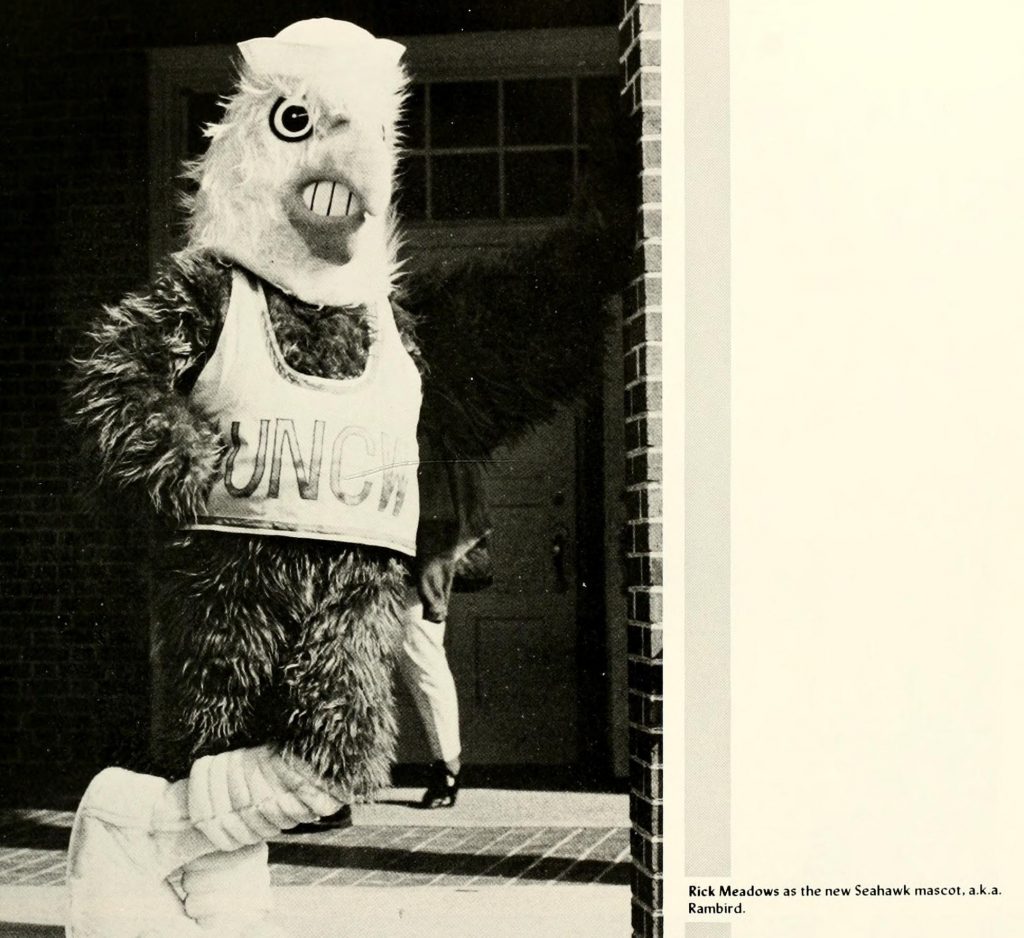 The Seahawk. From the 1987 Fledgling yearbook, UNC-Wilmington.

Some schools have developed multiple mascots dedicated to different audiences. It seems like the difficulty with these types of costumes is how to pull off a fierce facial expression that doesn’t come off as goofy or too scary for children. I think this picture from Davidson College sums it all up: 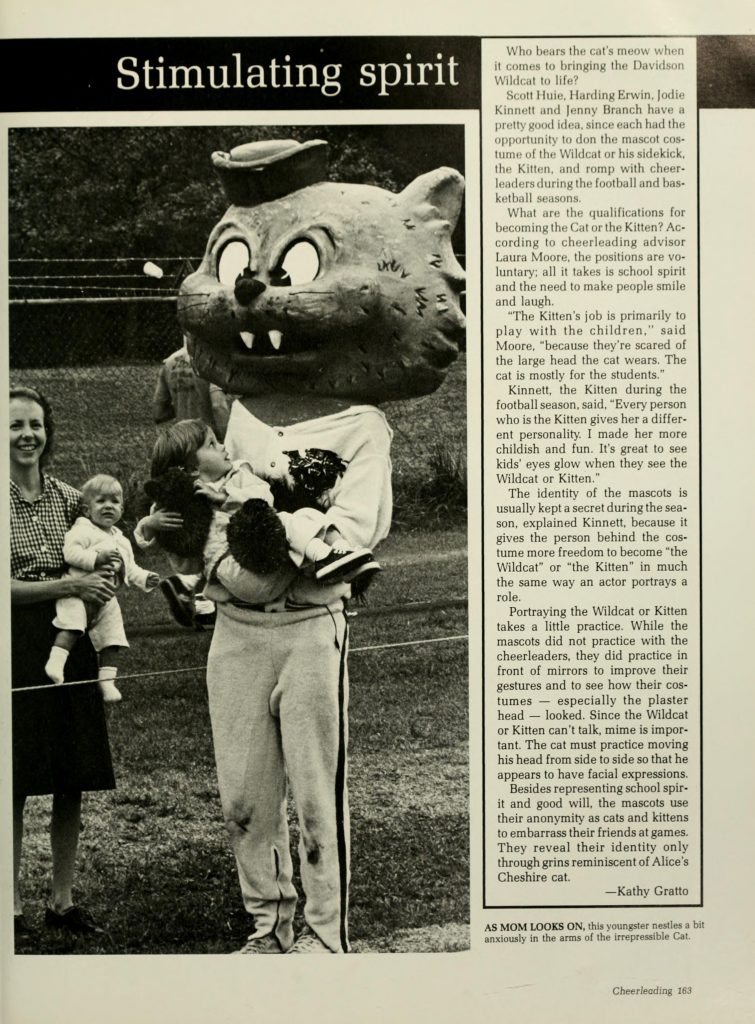 The Davidson Wildcat and … friends. From the 1983 Quips and Cranks yearbook.

I will also take this opportunity to mention a mascot that routinely makes the “wait … what?” list – the Campbell University Fighting Camels: 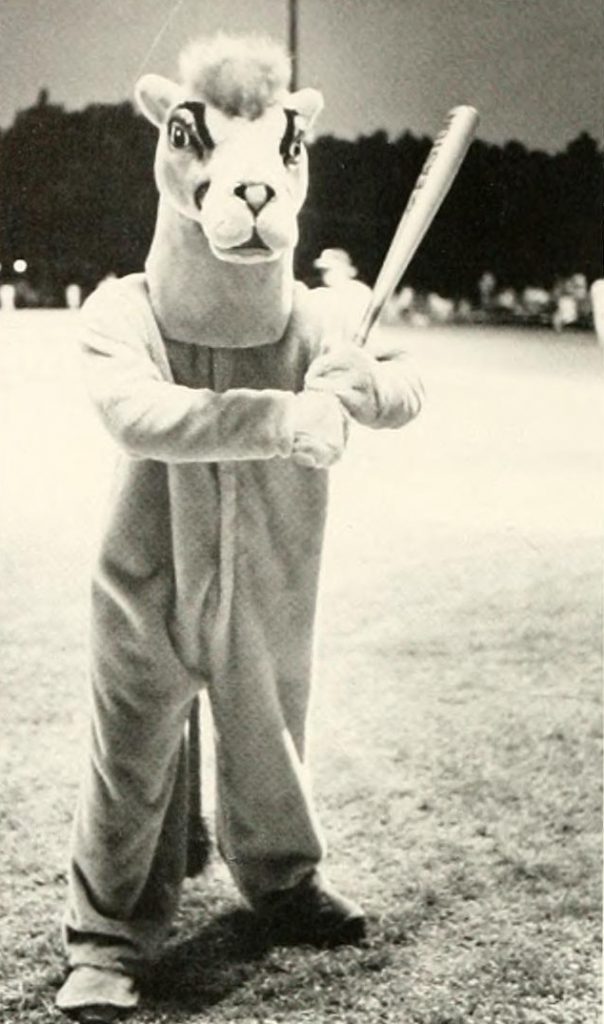 The Campbell Camel. From the 1983 Pine Burr yearbook.

Even the humans and human-like creatures are clothed in oversized costumes these days. Wake Forest University’s Deacon is a dapper chap: 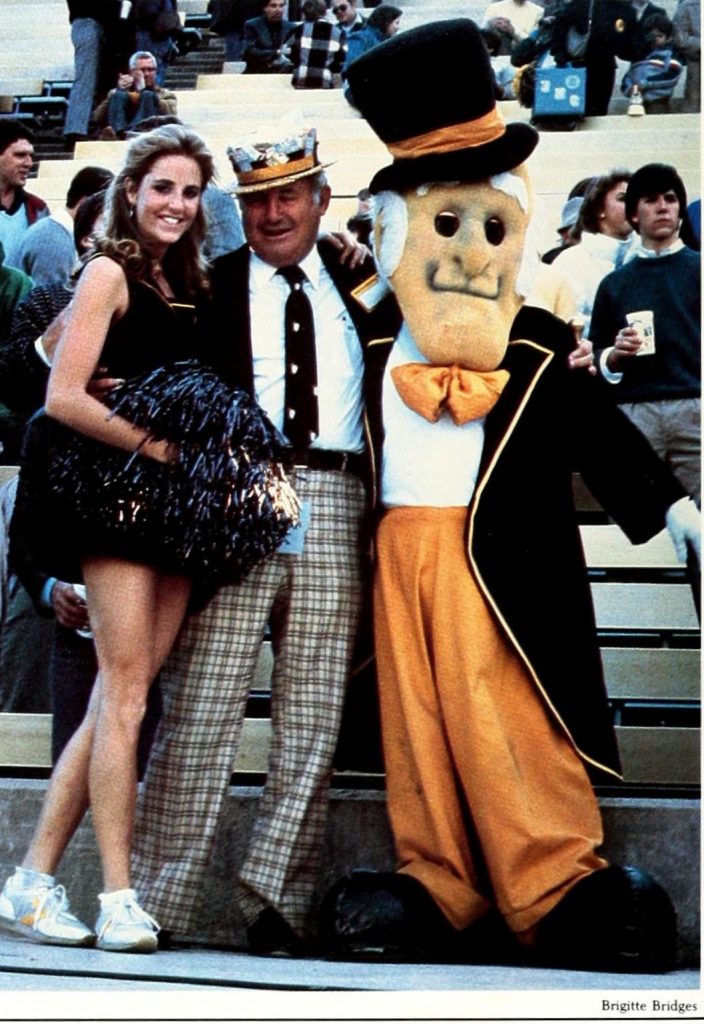 Wake Forest’s Deacon poses with fans. From the 1985 Howler yearbook.

In addition to the Demon Deacons and the Blue Devils, North Carolina boasts a number of  other spiritual mascots: North Carolina Wesleyan’s Battling Bishops, Belmont Abbey’s Crusaders, and Guilford College’s Quakers. Meredith College’s teams are known as the Avenging Angels (formerly just the Angels). While Elon University’s mascot is now the Phoenix, before 2000 they were the Fighting Christians: 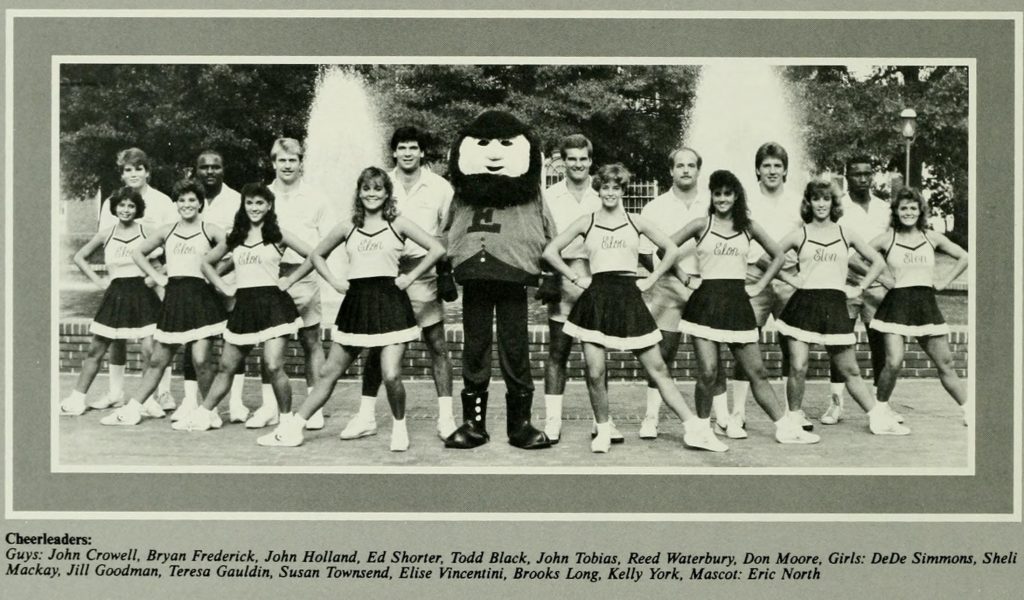 The Elon Fighting Christian mascot with cheerleaders. From the 1986 Phi Psi Cli yearbook.

Two schools break with the animal/human tradition in North Carolina. The Brevard College Tornadoes and the Louisburg College Hurricanes. Weather phenomena mascots are always difficult to pull off. I couldn’t find one for Brevard, but Louisburg, which currently has a bird mascot, had “Louie” up until 2006: 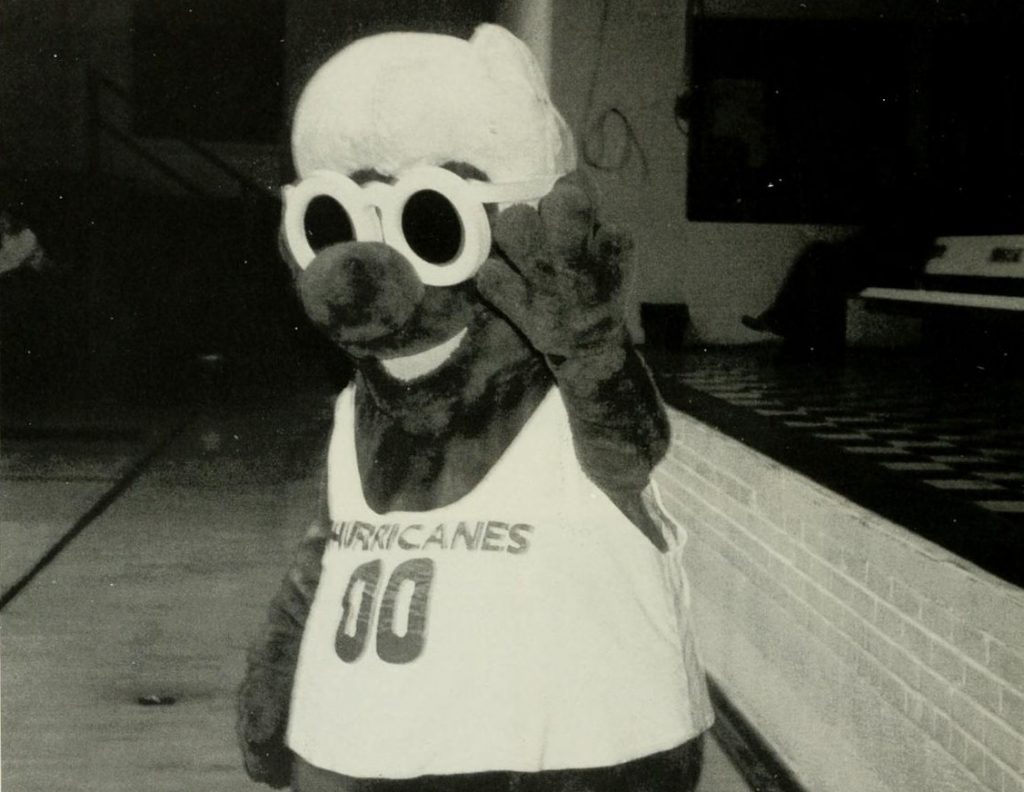 Louie, the former Louisburg College Hurricanes mascot. From the 1996 The Oak yearbook.

Who knows when the next mascot sea change will happen. Below is a list of mascots in North Carolina; let us know if we got anything wrong. Which one is your favorite?

See how UNC School of Dentistry students relaxed in 1984