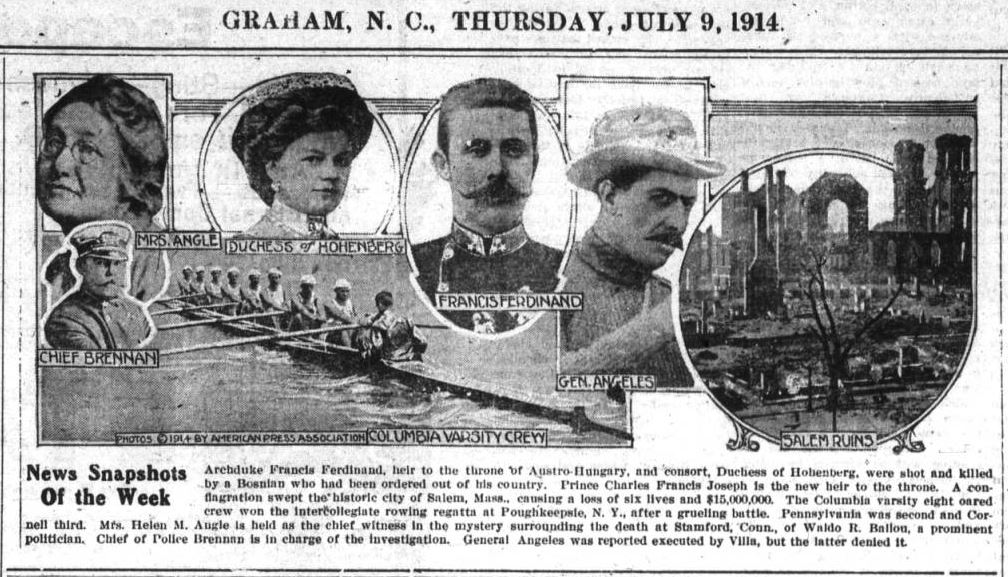 The Alamance Gleaner’s News Snapshots of the Week for July 9, 1914 included details of the assassination of Archduke Franz Ferdinand and his wife. 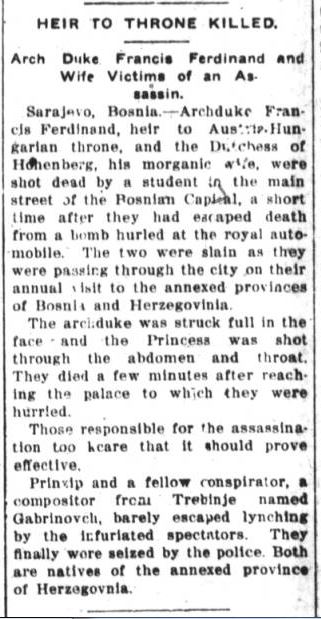 The notice of the Archduke’s assassination published by The Enterprise, The Hickory Democrat, and The Roanoke Beacon.

One hundred years ago, on June 28, 1914, the Archduke of Austria and his wife were assassinated by Gavrilo Princip, a member of the nationalist group Mlada Bosna (Young Bosnia). Many historians cite this incident as one of the first of several events which led to World War I. In commemoration of the war’s centennial, the staff at the North Carolina Digital Heritage Center will post occasional blog entries which examine the way in which the conflict was covered by newspapers across the state. Blog posts will focus in particular on how the war affected communities in North Carolina. Of the newspapers made available online by Digital NC, ten were in print during the war, each published once per week:

July 2 notice of the Archduke’s assassination from The Courier (Asheboro).

The Archduke’s assassination received mention in several of these papers.  The Enterprise, The Hickory Democrat, and The Roanoke Beacon all printed the same column, shown above.  Since the assassination occurred on a Sunday, the news had time to cross the ocean and reach editors before the weekly editions were published on Thursday and Friday.  However, The Alamance Gleaner did not alert their readers to the event until the following week when it was included in the syndicated News Snapshots of the week (see top of post).

Throughout July, tensions in Europe continued to escalate.  By the end of the month, Austria-Hungary had declared war on Serbia and in early August, Germany declared war on Russia, France, and Belgium.  This led to Britain’s August 4 declaration of war against Germany.

Headline from the July 31 edition of The Carolina Home and Farm and the Eastern Reflector.

With the beginning of open hostilities, the conflict began to receive more attention in North Carolina newspapers.  In the edition of July 30, The Alamance Gleaner ran a short column headlined “The War Dogs Aloose in Europe,” asserting, “It is now imminent that all Europe will be involved in a bloody conflict.”  On the same day, The Mebane Leader published a column originally printed in The Charlotte Observer in which Serbia is compared to a copperhead snake.  The average American may have been unaware of Europe’s rising tensions only a month ago.  By the first week of August 1914, the tensions had boiled over into full-blown war, making the situation newsworthy to the citizens of North Carolina.