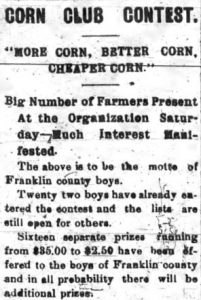 A column in the Feb 11, 1910 issue urging boys from Franklin County to enter an upcoming corn growing competition.

Over 100 issues of The Franklin Times, provided by our partner, Louisburg College, are now up on DigitalNC. These issues are from 1909-1911, and were published on a weekly basis. Louisburg is the seat of Franklin county, and The Franklin Times reports on news taking place in Louisburg, Franklin County, North Carolina, and the United States. In fact, the tagline printed at the top of the paper reads “the County, the State, the Union.” Although some large national news stories are covered, many of the issues focus primarily on Louisburg and Franklin County. For example, one weekly column, “The Moving People,” tracks “those who have visited Louisburg the past week” and “those who have gone elsewhere for business or pleasure.” The column lists individuals who returned from trips and those who visited from afar. This is indicative of the paper’s local interest. Local meetings, contests, municipal issues, social events, and more are recounted each week. 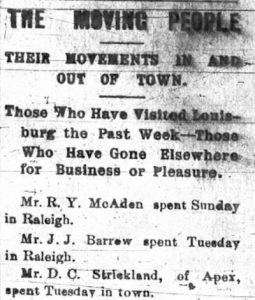 The Franklin Times was established in 1870, but still runs weekly with a print and online version. The Franklin Times website states, “it is the only newspaper published in the county and its content is focused on local government, local schools, the communities and the people who call this rapidly growing area home.” Although many years have passed, the focus of the paper remains the same.

To see more materials from Louisburg College, visit their partner page, or website.

← Additions to the Greenlee Collection of Scrapbooks Document the Doctors, Churches, and Events in McDowell County History