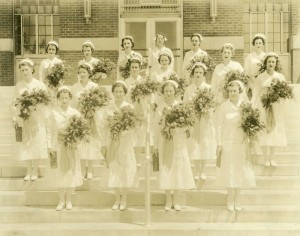 We’ve just posted a wide variety of photos, yearbooks, scrapbooks and other documents from one of our newest partners, Rex Healthcare Library in Raleigh. Many of these items document the history of the Rex Training School for Nurses as well as Rex Hospital, which both opened in 1894. We’re so pleased to help present documents that describe such an integral part of North Carolina’s nursing and healthcare history.

The Training School for Nurses was the first school of nursing to be established in the state. The first class had four graduates, and they learned “at the convenience of the doctors” while actively caring for patients. The school accepted its first male student and first official African American student in 1966. It operated until 1974.

You can view all items from the Rex Healthcare Library, or explore groups of items by type: