The batch features nine minute books, a book detailing the history of First Baptist Church, over forty photographs, and various other documents. Photographs include images of the interior and exterior of the church, pastors, the choir, Sunday School on Easter, and most notably, Harry Truman’s visit to the church on November 7, 1948. A more detailed description of his attendance and a copy of the invitation to the event can be found here and here. 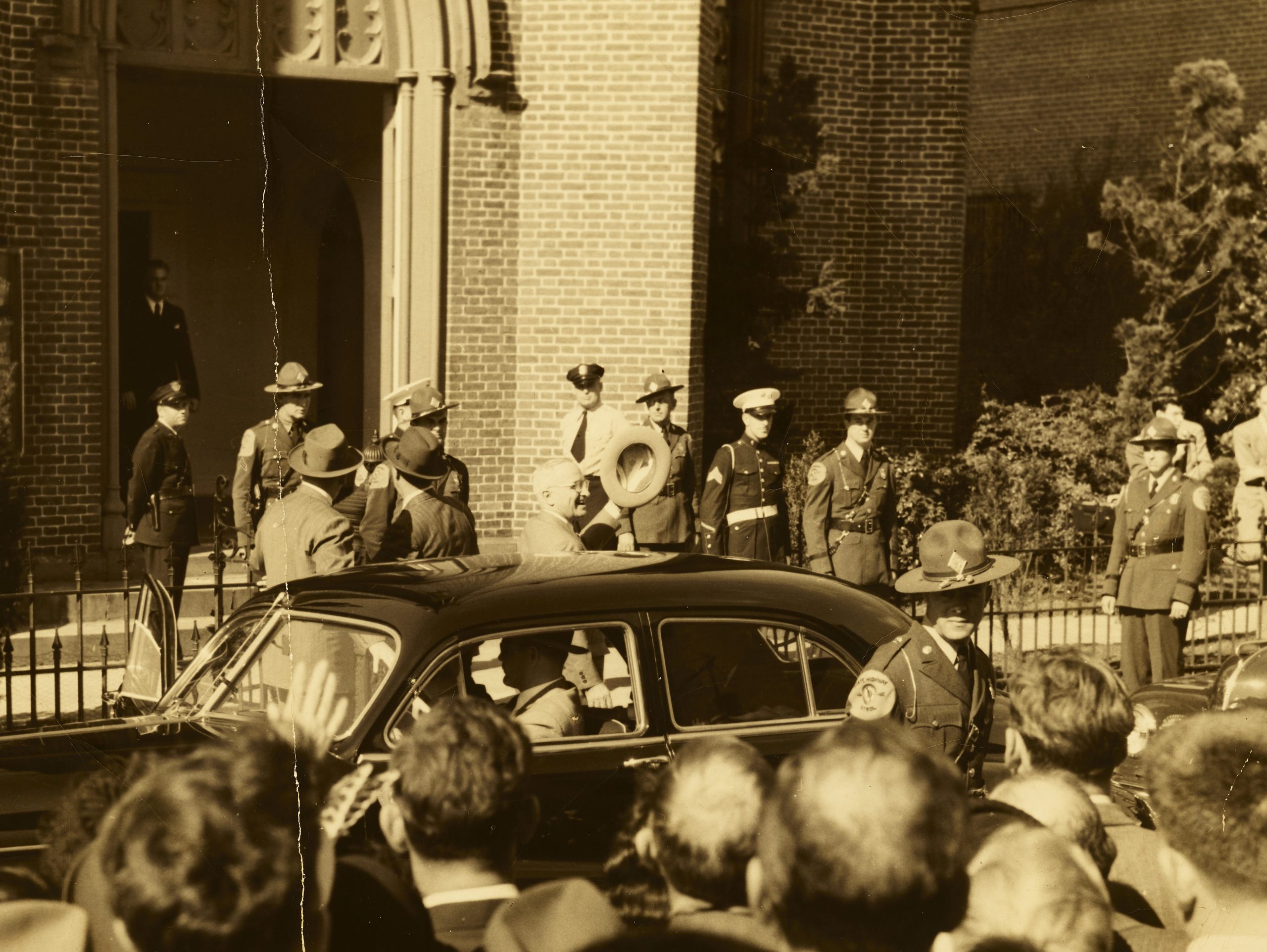 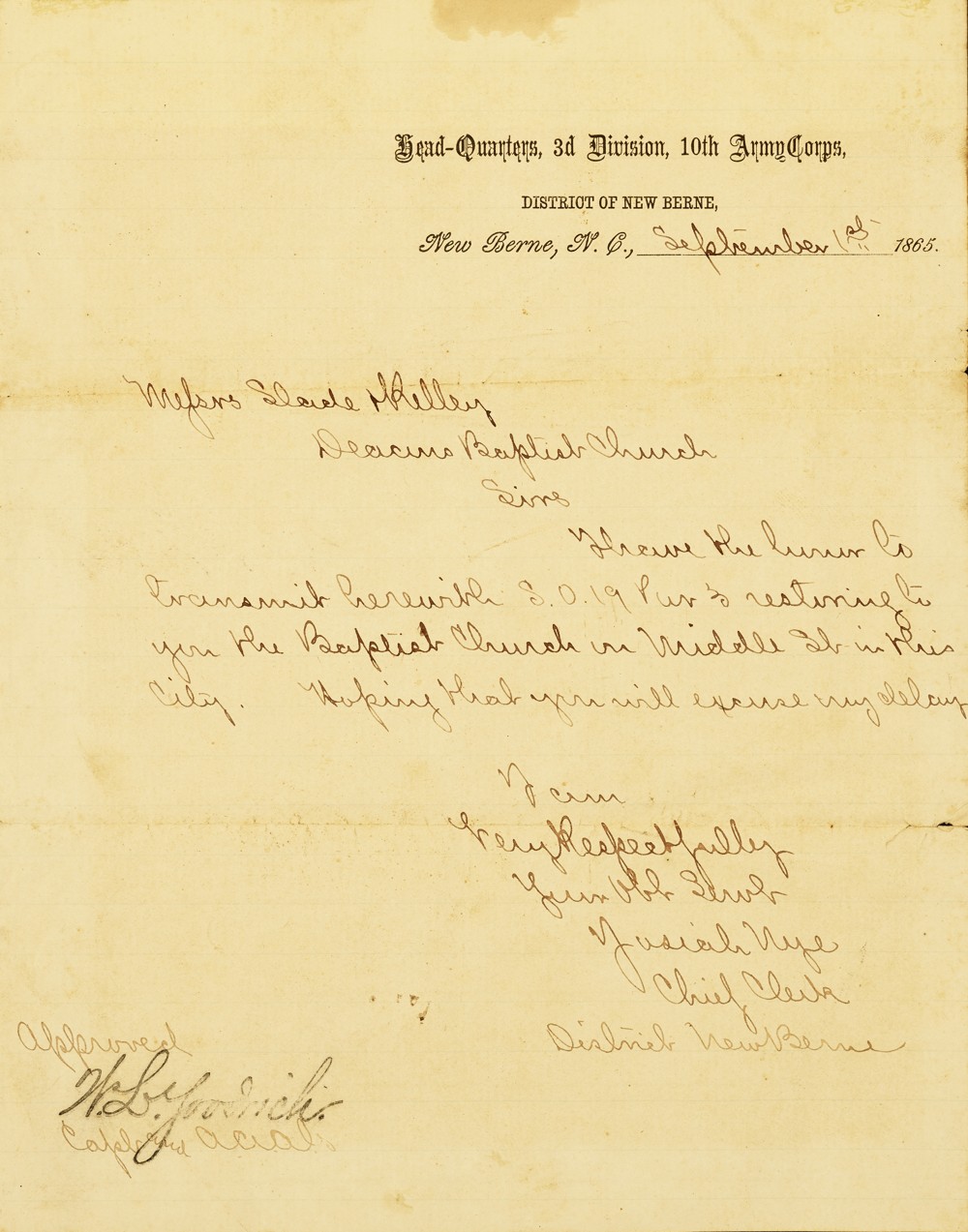 A letter sent from the headquarters of the 3rd Division, 10th Army Corps on September 1, 1865 returning the church to the Deacons of First Baptist Church after the end of the Civil War. 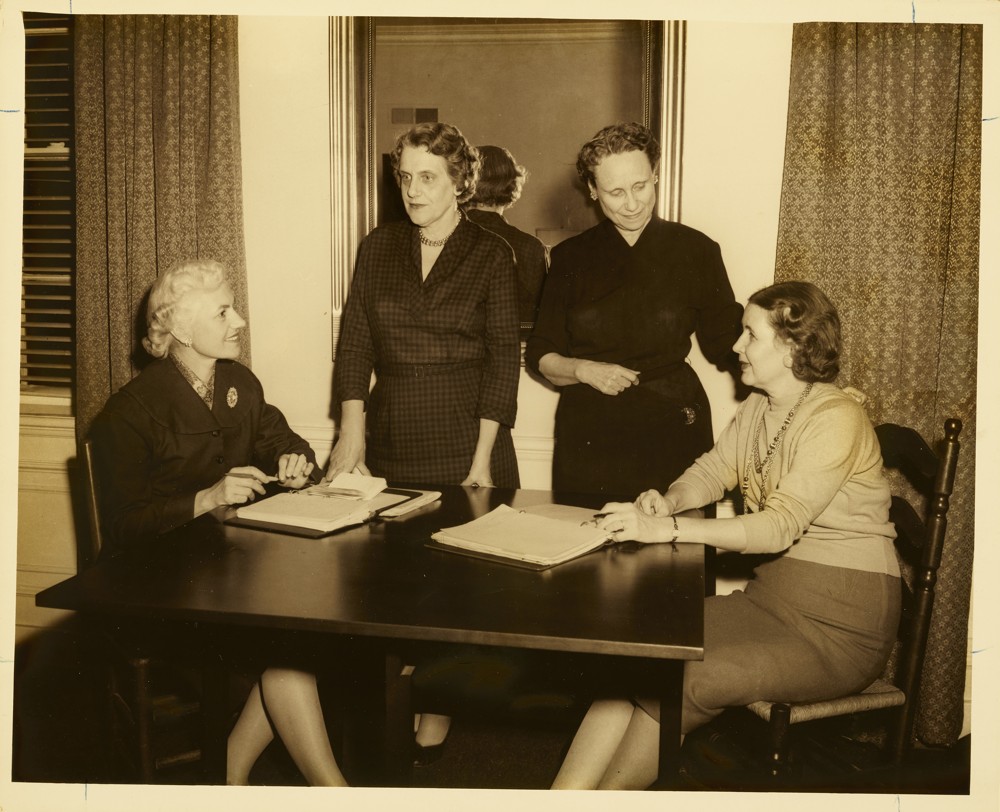 Thanks to our partner Edgecombe County Memorial Library, another batch of architecture research materials for structures in the county are on DigitalNC.  This batch covers 58 buildings in Edgecombe County, including Norfleet Plantation, the supposed oldest house in Tarboro, and the African American Masonic Lodge in Tarboro.  Photographs, research notes, maps, and other materials are included for many of the buildings. 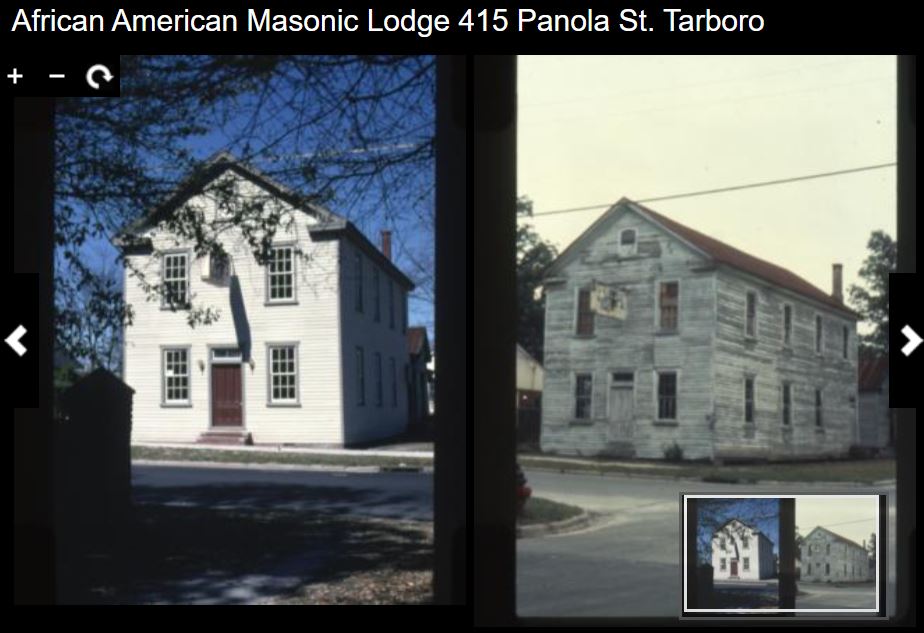 Photographs of the African American Masonic Lodge in Tarboro

Nineteen new photos and one newspaper clipping are now available to view on DigitalNC courtesy of our partners at the Chapel Hill Historical Society. All images focus on Baum Jewelry Craftsmen, a Chapel Hill jewelry store that was located where I Love N.Y. Pizza currently resides.

Two images show the exterior of Baum Jewelry Craftsmen while three others document the staff, Walter Baum, and an award granted by The Chapel Hill Newspaper to the store for their brick architecture. The rest of the photos in this batch are various angles of West Franklin Street in the 1990s. Each photo meticulously documents the outside of I Love N.Y. Pizza, prompting a comparison of how the storefront used to look when Baum Jewelry Craftsmen occupied the space. Not only that, but these photos also show the various stores that used to line Frankin of yesteryear, such as TJ’s Campus Beverage and Caribou Coffee. Locals will also recognize glimpses of The Yogurt Pump in a few photos. 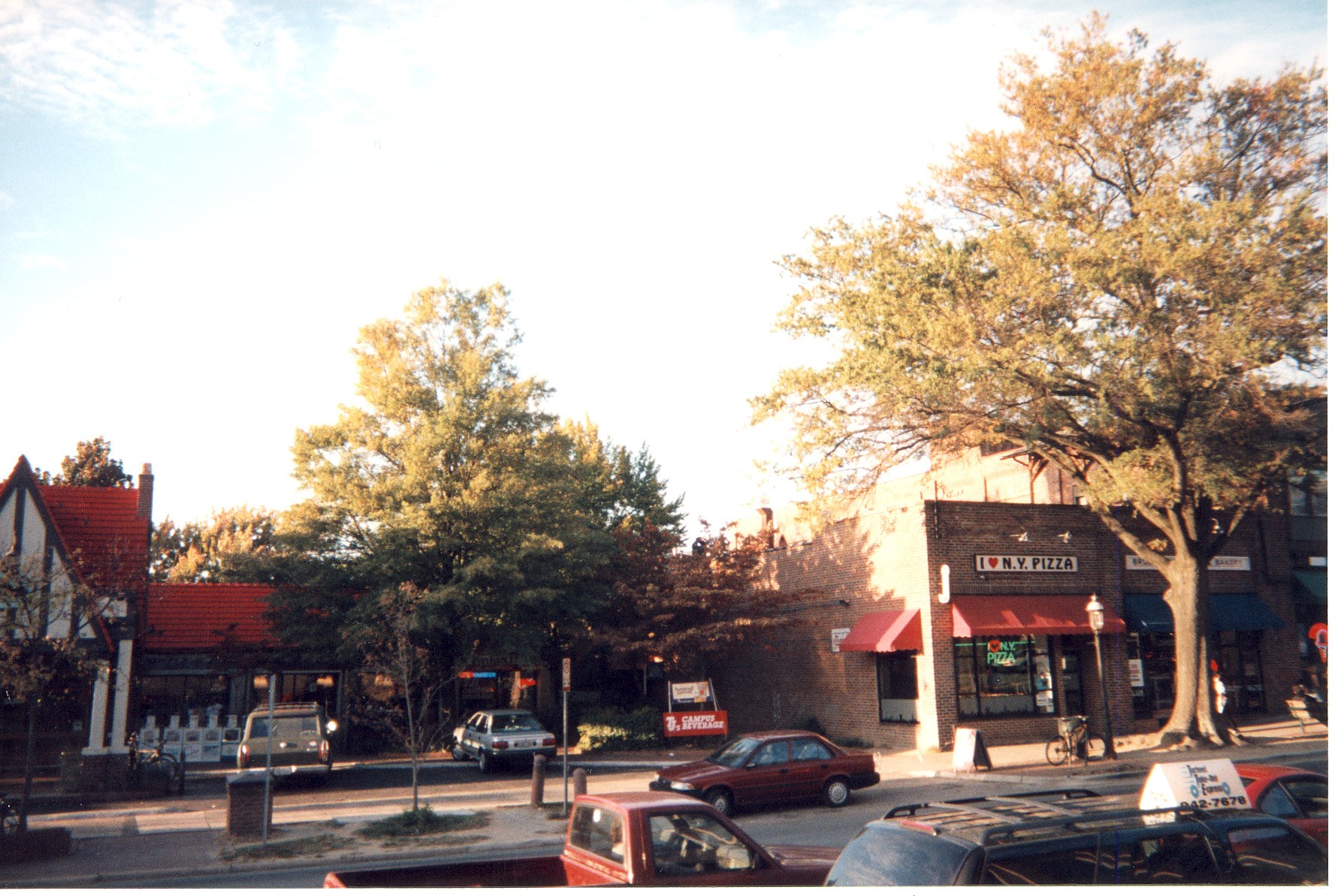 To see more photos as well as other materials from the Chapel Hill Historical Society, visit their contributor page and check out the material selections on the left-hand side. Or check out their website by clicking here. Thanks to our partner, the Olivia Raney Local History Library, we now have volume 1 of Wake, Capital County of North Carolina on our website. This volume of Wake, Capital County of North Carolina focuses on the history of the region from the prehistoric era through the late 19th-century celebration of the centennial of the county’s founding. However, the bulk of the book starts with the history of eighteenth-century Wake County history. The work discusses Wake County’s role and experiences through its own history and in the context of major national and international events such as the Revolutionary War and the Civil War and Reconstruction periods. The Olivia Raney Local History Library is a branch of the Wake County Public Library system. It houses a host of research materials on a variety of historical and genealogical topics related to Wake County. Interested parties can also purchase volumes I and II of Wake, Capital County of North Carolina and The Historic Architecture of Wake County, North Carolina here. For more information about the Olivia Raney Local History Library, please visit their website.

A couple of weeks ago UNC’s university archivist tweeted about finding articles in the Daily Tar Heel about a flu epidemic on UNC’s campus in early 1941. Intrigued – and figuring it was in no way contained to UNC’s campus – we did some digging in other newspapers on our site to find other stories about the epidemic’s impact on other campuses in NC at the time. A topic that is feeling quite relevant now, we found mentions scattered throughout the papers in January and February 1941 (for context – what would have been a year that started with an epidemic for these students and ended with the country involved in a World War) about how students were reacting to this sudden uptick in the flu.

Several campuses seemed to have a newfound appreciation for the infirmary, with an “Ode the Infirmary” published in Mars Hill College’s student newspaper. From the Montreat College paper, a look “Through the Infirmary Door”

The social lives of the Belles of Saint Mary’s were put on hold for the flu that struck campus in mid January.  Their society pages in their student newspaper detail such and the following flurry of activity as they were able to come out of quarantine. At the high school level, reports of basketball games and academic competitions were cancelled or put on hold as school was cancelled for several days to prevent the spread of the flu virus.  Both the students at Greensboro High School and High Point School reported such. Other social and academic events were also cancelled – all citing the epidemic as the cause. All in all, nothing quite as dramatic as what appears to have happened at UNC was going on at other North Carolina schools, perhaps another echo of what has happened in 2020.  A brief perusal of the community papers from the time show that the flu epidemic was something affecting the whole state for sure, with mentions of it in papers from as far east as Beaufort, NC and as far west as Franklin, NC in Macon County. Clipping from The Franklin press and the Highlands Maconian, January 23, 1941 January 22, 1941 issue of the State Port Pilot discussing the effects of the flu across the state.

To explore our over 1 million pages of digitized newspapers yourself, visit our North Carolina Newspapers page and read here about how colleges in NC responded to the 1918 Spanish Flu pandemic. Second Ward Senior High School was established in 1923 as the first public high school for black students in the Charlotte-Mecklenburg area. Before this school was established, black students in the area had to move to other areas in order to get a high school education. In the early 1970s, the school was closed and the building was demolished. As was the case in most Southern cities, formerly all-black high schools were usually torn down or repurposed after school segregation legally ended. Black students were then bused to formerly all-white schools in order to achieve integration. However, the legacy of the school lives on as an important symbol in the history of the black community of the Charlotte-Mecklenburg area. For more information about Second Ward Senior High School, visit this online exhibit by the Charlotte-Mecklenburg Library. The front page of the December 14, 1939 issue of the Tyrrell Tribune.

One interesting news story from the September 11, 1941 edition of the paper is the discussion of a possible state park being created at Cape Hatteras. Today, the Cape Hatteras National Seashore is run by the National Park Service. The park was established as the first national seashore in 1953. In the same issue, one headline reports the expansion of an airport at Manteo that would be the largest on the Carolina coast. The front page of the September 11, 1941 issue of the Tyrrell Tribune.

For more information on the Tyrrell County Public Library, visit their website.