About two years ago, we had the honor of hosting a group of students from Wilmington who were studying one of the most politically and socially devastating moments in the state’s history–the Wilmington Coup and Race Riots of 1898. Their efforts centered around locating and studying the remaining issues of the newspaper at the center of that event, the Wilmington Daily Record. Owned and operated by African Americans, this successful paper incited racists who were already upset with the political power held by African Americans and supporters of equality. During the Coup, the Record’s offices were burned and many were killed. Thanks to these students, their mentors, and cultural heritage institutions, you can now see the seven known remaining issues of the Daily Record on DigitalNC.

Our main contact on this project has been John Jeremiah Sullivan, a well known North Carolina author and editor. He originally approached us back in 2017 to enlist our help and, since then, has been working with a cohort of supporters, volunteers, and students to dig deeper into the Daily Record and to raise further awareness of its history. Today we’re excited to share the Project’s latest efforts in Sullivan’s own words below. 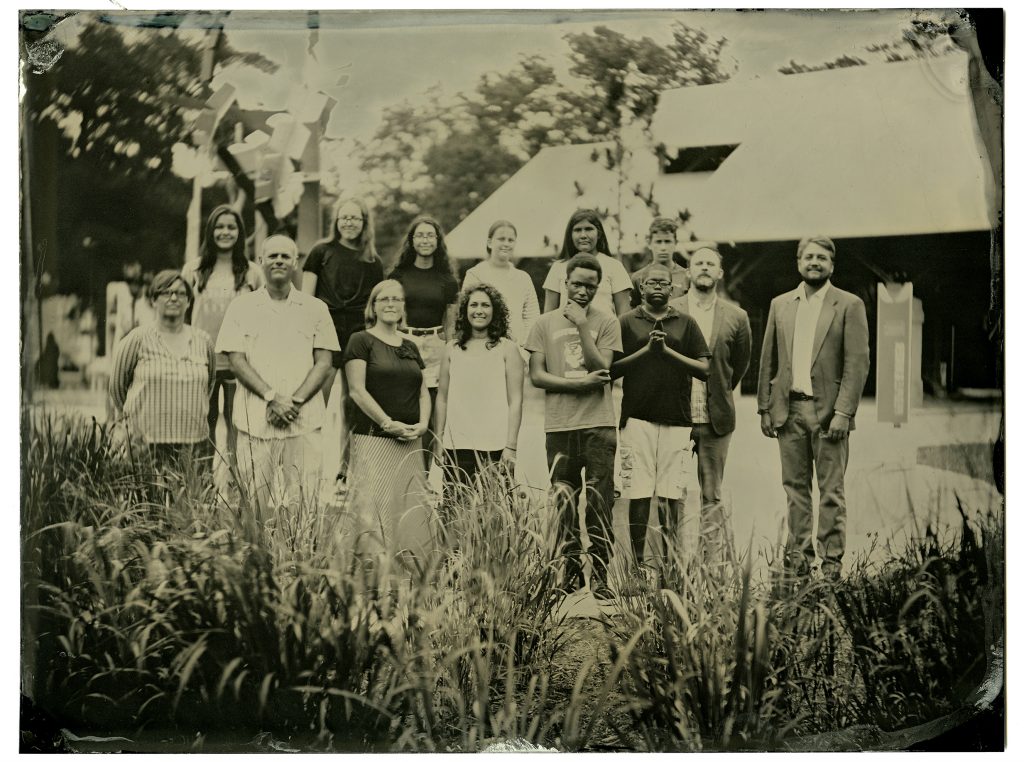 Daily Record Project Historians, taken by Harry Taylor in May 2017 at the Cape Fear Museum

“For the past four years, Joel Finsel and I, in conjunction with the Third Person Project, have been meeting weekly with groups of Wilmington 8th-graders to learn as much as we can about the Wilmington Daily Record, the African American newspaper destroyed at the start of the race massacre and coup d’état that turned Wilmington upside down in November of 1898. At the heart of the original Daily Record Project was an attempt to locate any surviving copies of the paper. Books and essays about the massacre always include a sentence along the lines of, ‘Sadly no copies remain,’ but it seemed impossible that they could all have disappeared. After three years’ hunting, we were able to identify seven copies–three in Wilmington, at the Cape Fear Museum (the staff historian there reached out to make us aware of their existence), three at the Schomburg Center for Research in Black Culture in New York City, and one at the State Archives of North Carolina in Raleigh. (The latter is a mostly illegible copy of the issue containing Alex Manly’s editorial of August 18, 1898, the article seized on by white supremacists as a pretext for stirring up race-hatred in the months before the massacre.) These seven copies, thanks to the North Carolina Digital Heritage Center, can now be examined online by anyone with an Internet connection. For the first time in more than a hundred years, it is possible to read one of the most famous and important African American newspapers of the late-nineteenth century.

“When those seven copies had been thoroughly read through and annotated, and it did not seem that any more were going to surface (at least not in the near future), we found ourselves faced with the question of “What next?” Should we discontinue the project? We had no desire to do that—it had been too much fun and we were learning too much. We had developed rewarding relationships with the three middle schools that sent their students to study with us: Williston School, D.C. Virgo Preparatory Academy, and the Friends School of Wilmington. The Daily Record Project had become a kind of field laboratory for excavating more information about the events of 1898 and Wilmington history more largely. The last thing we wanted was to shut that down. 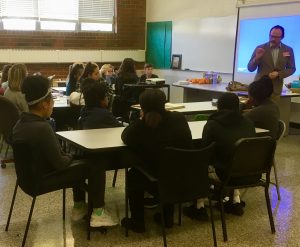 “We had noticed, in the course of studying the seven copies, that there did exist, in various sources from that period, isolated fragments of text from various issues of the Record that may no longer exist. We were finding these fragments in other newspapers. Just as publications do today, papers were reprinting one another’s material. Sometimes it was in the form of a quotation—several paragraphs, or even just a sentence. Sometimes whole articles were being re-published. In a couple of cases, the text survived by way of advertisement: a traveling circus, for instance, had liked what the Record said about it when it passed through Wilmington, and used that paragraph in announcing future appearances. We started wondering how many of these “ghost” stories might exist. The more we looked, the more we found. We enlisted the 8th graders to help us search. They turned up even more stuff. The range of sources we were using expanded. From old newspapers we moved on to magazines and books and pamphlets and letters. Often the writers or editors doing the quoting were critical of, or even hostile to, the Record and its politics. In attacking pieces from the Record that had offended them, they were unwittingly preserving more of that newspaper’s copy for future generations.

“By the time it was over, we had a folder containing scores of these “remnants,” as we were calling them, enough to create an entire new issue–a “ghost issue”–of the Daily Record, and that is what we have done.

“To create the actual issue, we worked with a brilliant graphic designer in New York named Stacey Clarkson James, who for many years had been the Art Director at Harper’s Magazine. I had worked with Stacey at Harper’s many years ago and have collaborated with her many times since. She exceeded even our high expectations by designing a newspaper issue that is not so much an imitation of the original Daily Record as a resurrection. She went in and crafted, by hand, a typeface that matches the now-extinct one used by Alexander Manly and the original editors. Then she laid out the pages according to the old 1890s press-style, even dropping in advertisements that we knew to have appeared in the Record. At the top it says REMNANTS. We gasped when we saw it.

“On the second page, above the masthead, can be seen a list of sources we used. There are a lot of them. The very size and range of the list shows the scope of the Record’s notoriety in its day. It was being read in many parts of the country.

“Maybe the most interesting thing about this issue is that, because it consists only of material that other publications found interesting enough to re-print, it winds up forming a kind of Greatest Hits compilation (though all of these “hits” have been buried in other papers until now). It’s a fascinating issue to read. There are articles on politics, culture, and social life, as well as strange unplaceable pieces, like the one about a man in Arkansas who caught fire in his orchard and just kept burning. No one could put him out. We still aren’t sure what that one means.

“Two of many things worth highlighting within the “Remnants” issue: 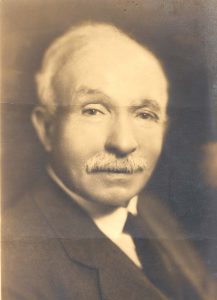 “First–at the center of the issue is Charles Chesnutt’s short story, “The Wife of His Youth.” Chesnutt was, of course, one of the first great African-American fiction writers, and the novel that many consider to be his greatest work, The Marrow of Tradition, is a re-telling of the events of 1898, set in a fictionalized Wilmington that he calls Wellington. Chesnutt had many and deep ties to this city, more than most scholars are aware. (His cousin, Tommy Chesnutt, was the “printer’s devil” or apprentice at the Daily Record–you can find his name on the masthead on page 2.) “The Wife of His Youth” is probably Chesnutt’s best-known story. What’s curious is how we learned that it ran in the Daily Record. In Chesnutt’s published correspondence, there is a letter to Walter Hines Page, his editor at the Atlantic Monthly. It’s basically a letter of complaint: Chesnutt is telling Page that Alex Manly had reprinted the story (serially) in the Record, without having asked permission. At the time of that writing the Record had already been burnt and Manly had fled Wilmington, so Chesnutt essentially says, I guess we can give him a pass… But the complaint contained valuable information, because it tells us that the Record had an ongoing literary dimension. Manly was likely running stories and poems quite frequently—one of the seven surviving copies also contains a short story, “The Gray Steer” by one Frank Oakling. It’s on page 3 of the August 30th, 1898 issue. 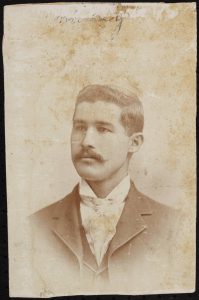 “Second–readers will notice that at the end of the “Remnants” issue, in the last couple of columns on the last page, there is a series of articles from not the Wilmington Daily Record but the *Washington* Daily Record. These represent probably the most exciting discovery we made during this most recent session of the Daily Record Project. The way the story of 1898 traditionally gets told, the massacre and coup d’état marked the end of the Manly brothers’ journalistic careers: they left the city, their ambition blighted, and sank into relative obscurity. The reality could not have been more different. It turns out that the Manlys went almost immediately to Washington, D.C., and re-established the Daily Record there. Before a year was out, they had the press up and running. They operated the Daily Record for four more years in the capital, then handed it off to another editor, who ran it for another six or seven. One of their articles included here is a stirring anti-imperialist denunciation of American military intervention in the Philippines. Another describes the renaissance in African-American literary activity that was felt to be happening around the turn of the century. As far as we can determine, these few pieces represent the only extant copy from the *Washington* Daily Record, for its entire decade-long run.

“There is much more worth unpacking, but we want to allow visitors to the NC Digital Heritage Center’s website to have the fun of doing that themselves.

“Long live the Daily Record. Thank you for reading.

“There are a lot of people to thank. First, the incredible 8th-grade students participated in the “Remnants” session of the Daily Record Project. It was a privilege to work with them and be around their energy:

“And finally, a shout-out to the Digital Heritage Center. Thanks to you, more than 120 years after white supremacists tried to erase the Daily Record, people are reading it again.”