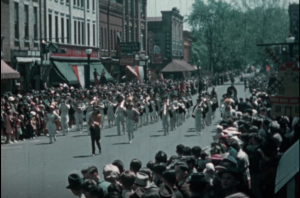 A batch of four videos of Washington, N.C. has been added to our collection thanks to our partner, the George H. and Laura E. Brown Library. Two of the videos, which are silent but in color, show footage of Washington from 1939, including notable buildings, Warren airport, boats on the water, and tulips in bloom. They also have footage of the Tulip Festival parade, which features floats, marching bands, and several excellent costumes. Since the annual festival is no longer celebrated, these videos give us an idea of what it looked like in its most popular era. 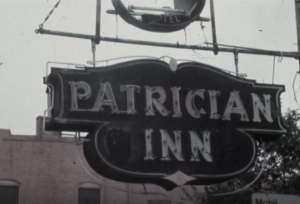 Speaking of bygone Washington cultural touchstones, the other two videos focus on the Patrician Inn, a popular place to stay founded by the Pickle family. One video offers a tour of the rooms, which feature several antiques and items of unique furniture. The second video provides some context to the inn’s collection in an interview with Mrs. Ellen Vincent Pickles and Emily Pickles Williams. Although the camera operator takes some artistic liberties that we probably wouldn’t see today, we do get even more footage of the treasures in the room as Mrs. Pickles tells some of her stories.

Since the Patrician Inn has since been converted to a parking lot, we will probably never encounter the subject of one of her most intriguing stories: the ghost(s) that haunted the inn (4:47). Mrs. Pickles tells the story of a couple of guests who claimed to have seen “the most beautiful ghost that [they’d] ever seen in [their] life,” who was apparently wearing a “white wig and a blue satin jacket” and “silver buckles.” This was not the ghost that Mrs. Pickles was familiar with; her usual ghost was named Paul Bregal (spelling unclear), and he liked to snuff out her candles on the end of the mantle. He, apparently, did not wear such finery, and he usually lived in a closet rather than a guest room.

You can watch all of the videos here or explore our North Carolina Sights and Sounds collection. To see more from the Brown Library, you can visit their partner page and their website.

Additional Issues of Local Newspapers Available – Plus, A New Title!