Yesterday the North Carolina Digital Heritage Center staff visited the Oliver Nestus Freeman Round House Museum in Wilson, N.C. The museum celebrates African American history in Wilson County and honors the memory of Oliver Nestus Freeman, a local stonemason and builder who had a fascinating life and career. 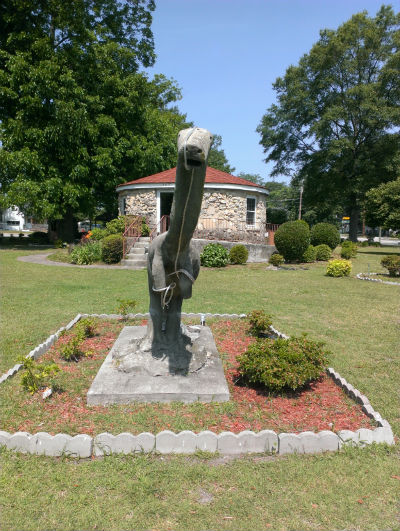 Freeman was a Wilson County native, born in 1882. He attended the Tuskegee Normal School where he gained experience in construction and masonry. He returned to Wilson in the 1910s and worked as a mason for decades. He worked on many projects, incorporating a distinctive style using a variety of stones of different shapes and sizes. Many of his projects are still standing in Wilson today.

In addition to his masonry work, Freeman was also known for the animals he kept at his house. The yard was filled with wild birds, rabbits, a goldfish pond, and several small bears. It became a sort of a tourist attraction with residents and visitors stopping by to give peanuts to the bears.

One of Freeman’s most distinctive buildings was the round house he built in the 1940s to rent to veterans returning from World War II. The house had fallen into disrepair by the 1990s when it was chosen by local citizens to serve as a new African American history museum. The house was moved in 2001 to its current location at the intersection of Nash and Hines streets near downtown Wilson. The museum contains photos and documents commemorating African American pioneers and leaders in Wilson and includes a nice display of photos and artifacts from Freeman’s life.

The museum is open for visitors and is well worth a visit next time you’re in or passing through Wilson. There is more information on the their website.