Digital Davie shares glimpses of Davie County history through digital images of the people, places, institutions, and events that have shaped the county in the past and continue to do so today.

Digital Davie makes extensive use of the research published in the book History of Davie County in the Forks of the Yadkin by James W. Wall, Davie County historian, whose dedication and lifelong interest in promoting county history are much appreciated by the citizens of Davie County.

Davie's settlement origins in the eighteenth century cannot be seen in its extant buildings, with the possible exception of the William Frost house which family traditions maintain was built in 1762. Kirk Franklin Mohney in 1985 toured Davie County and photographed buildings judged to be over fifty years old with some degree of original architectural integrity. His findings were published as The Historic Architecture of Davie County. Although much of the county's architectural legacy has been preserved, much also has been lost to time and development.
View all items in 'Architecture'→

In 1860, just over 20% of Davie County families owned slaves; most families owned fewer than five slaves. Hinton Rowan Helper, born on the Squire Boone home site in Davie County, authored a book, The Impending Crisis of the South: How to Meet It, which helped to inflame opposing sentiments leading up to the Civil War. Published in 1857, the book proposed abolishing slavery and influenced Lincoln's election to the Presidency. Davie County fielded eight volunteer companies in the war; almost half of the white male population in the county served in the military. On April 11, 1865 the Second and Third Brigades of General George Stoneman's army, numbering about 3,000 men, crossed the Yadkin River at Shallow Ford and came through Mocksville on the way to Salisbury with the intention of burning down the Confederate Prison. Mocksville escaped extensive damage due to Stoneman's hurry to free the prisoners. Stoneman's haste was for naught; the prisoners had been moved to Wilmington in February.
View all items in 'Civil War'→

Davie County includes eight townships. Mocksville, named the county seat in 1836, incorporated in 1839. A post office had operated in Mocksville since 1810, when the town was known as Old Mocks Field. Calahaln Township existed as early as 1780, when it was chosen as the site for Beals Meetinghouse, the first Methodist Church in western North Carolina. Jerusalem Township came into being sometime before 1815 when Nicholas Click donated land for the New Jerusalem Church in southern Davie County. Jacob Hanes laid off the town of Fulton on the Yadkin River in eastern Davie County in 1819. The Fulton ferry carried traffic across the river. The Bryan Settlement of the late 1700s encompassed what became Farmington Township in the northeast sector of the county. The Farmington Post Office was established in 1837. The Georgia Road ran through Clarksville Township (named such in 1868), first named Chinquapin, in the northwest section of Davie County. Shady Grove Township includes the town of Advance, incorporated in 1893 to protect its thriving distillery business from local option elections which were shutting down distilling operations in western North Carolina. . The town of Cooleemee began in 1899 with the purchase of 532 acres of land from Fannie C. Hairston of Cooleemee Plantation. The Town of Bermuda Run is the newest municipality in Davie County, incorporated on July 1, 1999.
View all items in 'Communities'→

Education played an important role from the settlement of the county. Over 60 public and private schools, seminaries, and academies taught local youth in the early 1900s.
View all items in 'Education'→

In December 1836, the North Carolina legislature named a new county carved from Rowan after William R. Davie, Revolutionary War hero and North Carolina governor. Three years later, Mocksville became the seat of Davie County, building the original courthouse in the center of the town square. In 1909, a new courthouse building replaced the old building, which survived until the paving of Main Street in 1922. The National Register of Historic Places added the current courthouse in 1979.
View all items in 'Formation of Davie County'→

Court Week at the county courthouse in Mocksville generated a lot of activity for the town. Other early government services included the jail and county post offices. As development ensued, additional services grew including fire trucks and stations, electricity, water treatment, a county home for the poor, paved roads, hospital, and a public library.
View all items in 'Government & Services'→

European settlers began settling the area in the mid 1700s, following the Great Wagon Road south from Pennsylvania. Plentiful hunting, abundant forests, and fertile land for farming supported a growing population. The Morgan Bryan family arrived in 1748 and became one of the largest local landowners, with 2,200 acres known as Bryan Settlement, now Farmington. Squire and Sarah Boone, acquaintances of the Bryans, migrated into the area around 1752, acquiring land in 1753. Their son Daniel reveled in the good hunting. Daniel and Rebecca Bryan married in 1756 and lived in a log cabin on Sugartree Creek in Bryan Settlement. Daniel Boone resided in the area for over a decade before moving west into Kentucky. Squire and Sarah Morgan Boone lie buried in Joppa Cemetery in Mocksville.
View all items in 'Pioneers'→

Five church congregations were active in Davie County prior to the Revolutionary War including Heidelberg Lutheran, Joppa Presbyterian, Dutchman Creek Baptist, Moravian meetings at Timber Ridge, and Fork Meeting House. A wide range of religious faiths continues to be represented.
View all items in 'Religion'→

Divisions between Tory sympathizers and Patriots ran strong and deep. Church records and minutes of the Rowan Committee of Safety reflect pressures brought to bear on local citizens. An April 1777 law defined treason and required an oath of allegiance from local Tories at the risk of land seizure and banishment. Samuel Bryan, large landowner along the Yadkin River, raised a Tory force of 800 men in the region. Few names of local Patriots made it into official records, with one important exception being Richmond Pearson, originally a member of Bryan's company. At the first muster after the signing of the Declaration of Independence, Pearson refused to join ranks. The crowd decided that a fistfight between Pearson and Bryan would determine the side on which the company would fight. Pearson won and became the leader of the "Fork company for Liberty."
View all items in 'Revolutionary War'→

1878 marked the beginning of the Masonic Picnic in the county. The Local Legacies project of the Library of Congress includes the Mocksville Masonic Picnic in its listings. Fraternal organizations, clubs, community events and recreation offered significant social and civic opportunities to county residents.
View all items in 'Social Life & Customs'→

By the mid-1800s, five main roads crossed Davie County, linking it with adjoining counties. Horses, carriages and buggies, and ferries gradually gave way to automobiles and trains. Roads and bridges were built and paved.
View all items in 'Transportation'→ 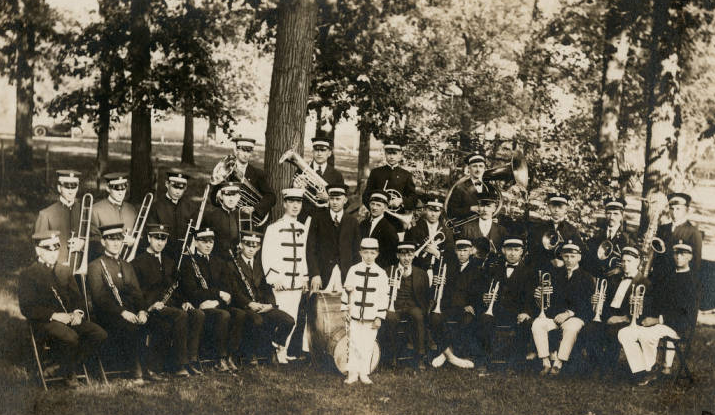