Between 1894 and 1898, the Republican-Populist Fusion party grew to prominence in North Carolina. The party supported voting rights for and political participation by African Americans, along with financial measures intended to support farmers and other members of the middle class. Throughout those years, the Democratic Party of the time fought furiously to reverse that trend and reassert the supremacy of wealthier white men in politics and business. Wilmington, the most populous North Carolina city at the time, figured prominently in that fight.

While there were many actions and reactions stoking the political tension in the state over those years, the ire of white supremacist Democrats was particularly raised by an article written by Alexander Manly and published in August 1898 in the Wilmington Daily Record, a well-known newspaper, of which he was editor and partial owner. The article discussed sexual relationships and race, stoking the anger of those already outraged about Wilmington’s Republican-Populist controlled local government. After regaining control of state government in the election of 1898, a plan was carried out by white supremacist Democrats to seize Wilmington’s local government. This culminated in a coup d’état, also referred to as the Wilmington Race Riots, on November 10, 1898. During that coup the Daily Record offices were destroyed and many people were killed. You can learn more about the persecution Manly and his family faced leading up to the riots, as well as more details about the political tensions of the time, at NCpedia.

Very few copies of the Daily Record are known to remain. Over the last few years, journalists John Jeremiah Sullivan and Joel Finsel, in conjunction with the Third Person Project, have been trying to give broader access to extant issues of the Daily Record. So far they have located seven––four on microfilm, as well as three original paper issues––residing in libraries and museums. To fill in gaps, Sullivan and Finsel, along with their class of Wilmington area middle school students, have located content originating from the Daily Record that was later reprinted by editors of other publications of the time. This effort has culminated in a “Remnants” issue, which compiles the reprinted portions in the style of the original paper, using a recreated typeface. We’re pleased to share that issue, along with the other known remaining issues, here on DigitalNC. You can learn more about the Project and the Remnants issue from Sullivan on our blog. 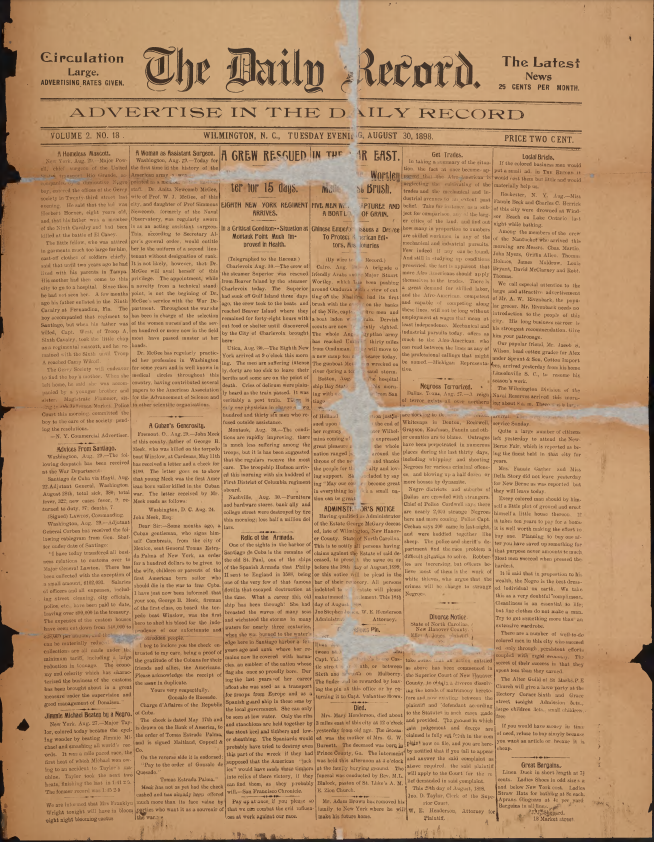