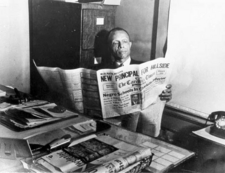 The Carolina Times was founded as The Standard Advertiser in 1921 by Charles Arrant, who died in 1922. In 1927 Louis E. Austin, originally from Enfield, North Carolina, purchased the paper and renamed it The Carolina Times. He transformed the paper into the most important voice for black North Carolinians during the 1930s. Austin edited and published The Carolina Times from 1927 until his death in 1971. The paper’s motto was “The Truth Unbridled,” and Austin used the paper to publicize racial inequities and to fight for racial equality in North Carolina and throughout the United States. The paper ceased publishing after the death in 2020 of Austin’s grandson, Kenneth Edmonds. Note: It is believed that issues from 1927-1936 and 1944-1948 no longer exist.