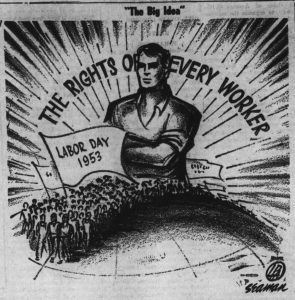 The first issue we have online, from January 24, 1935, was published less than a year after the General Strike of 1934, when between 300,000 and 500,000 textile workers along the East Coast (most from North and South Carolina) protested working conditions. Despite the large turnout and national recognition, though, workers in the Southern states did not see their demands met, which made many members lose faith in their unions.

Portraits of the AFL Council from January 24, 1935

The issues that we have online roughly follow the trajectory of organized labor in the state overall; the last issue we have is from 1953, when Operation Dixie officially ended, ultimately failing to unite textile workers into a single large union. Part of that failure stemmed from opposition by the AFL, the union behind the Charlotte Labor Journal.

Back in August, we announced our annual call for microfilmed newspaper digitization. We asked institutions throughout North Carolina to nominate papers they’d like to see added to DigitalNC. As it is every year, it was an incredibly tough choice – we are typically able to choose between 40-60 reels out of over 300+ nominated. This year we’ve chosen the following titles and years.

We hope to have these titles coming online in the first half of 2022.