It’s easy to blame lots of things on “kids these days”—has there ever been a generation that hasn’t? But the latest batch of yearbooks from the Lincoln County Historical Association might prove that some of today’s trends are older than you think. 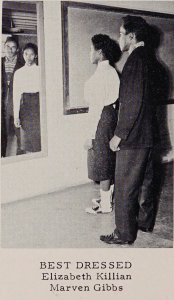 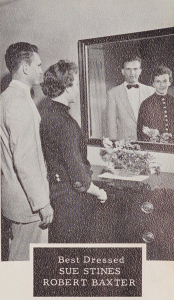 For example, mirror selfies seem like they would’ve come out of an era when many teenagers have cell phones and social media accounts. Not so! According to the 1958 edition of The Newboldlite from Newbold High School and the 1956 edition of Le Souvenir from North Brook High School, mirror selfies were the way to show off your fashionable outfits. Thanks to the mirror in these two “Best Dressed” superlative shots, you can get a front and back view of four of the best looks from these teen style icons. 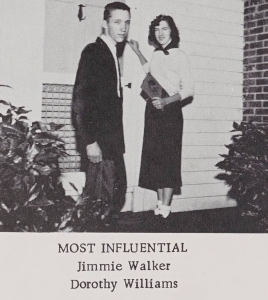 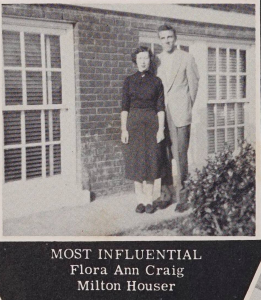 Another trend that may surprise you is the rise of influencers 50 years before the invention of Instagram. Apparently, these four students had a natural talent for influencing before it was even a formalized role. Both superlatives are from Le Souvenir; Flora Ann and Milton are from the 1954 edition, and Jimmie and Dorothy are from the 1957 edition.

To see more superlatives and the full batch of yearbooks, click here. You can browse our entire collection of high school and college yearbooks in our North Carolina Yearbooks collection. To learn more about the Lincoln Count Historical Association, you can visit their partner page or their website. 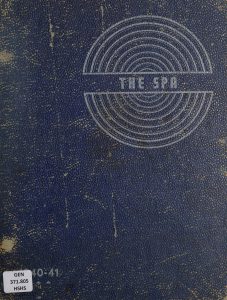 Thanks to our partnership with Madison County Public Library, Digital NC now has over 50 yearbooks from 6 different high schools. The high schools include Marshall, Mars Hill, Walnut, Hot Springs, Laurel, and Spring Creek High Schools. The yearbooks cover the 1940s – 1970s and cover a wide range of students, clubs, and faculty. Yearbook titles include “The Smoky” (1951) from Spring Creek High School, “Starlite” (1957), and “The Spa” (1940 –1941) from Hot Springs High School, and Panther Tracks (1957) from Walnut High School, just to name a few.

To view the entire yearbook collection and other items from Madison County Public Library, visit them here. You can also visit their website here. 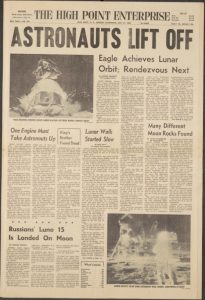 Front Page of The High Point Enterprise on July 21, 1969, after Neil Armstrong lands on the moon. 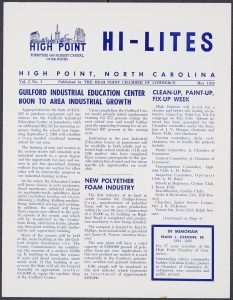 Front Page of the “Hi – Lites”, a report from the High Point Chamber of Commerce in 1958.

Digital NC is happy to announce new materials from the Heritage Research Center at the High Point Public Library and High Point Museum. The latest items include yearbooks, newspapers, annual reports, furniture catalogs and so much more!

Known as the furniture capital of the world for its many furniture companies, High Point has made a name for itself when it comes to buying and selling furniture. Included in this collection are catalogs from several different companies such as the Union Furniture Company, The Sign of Distinction in Your Home catalog from Globe Furniture Company, and many more. You can also find toy catalogs from the Fil – Back Sales Corporation in the collection as well. Along with the furniture catalogs, annual reports from the town of High Point are also available. Reports such as “Hi – Lites” and “Focal Point” provide details on what is happening within the High Point Community.

Finally, Digital NC has also made available 3 issues of The High Point Enterprise from July 1969. The issues cover Neil Armstrong’s historic landing on the moon in 1969 and discussion about the importance of his travels.

Special thanks to our partner Heritage Research Center at High Point Public Library and the High Point Museum for these wonderful materials! To view more from the HR Center, visit them here and here from High Point Museum.

Be sure to check out our newspapers, yearbooks, and memorabilia collections from partners throughout NC. 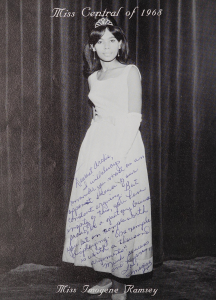 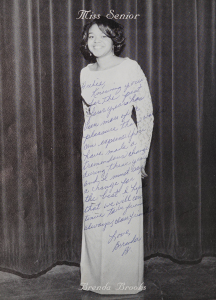 If you want to know the insider info from Central High School in Hillsborough, N.C., the 1968 Bulldog yearbook would be a good place to start. The edition that we’ve recently digitized, provided by the Orange County Public Library, is full of marginalia and personal notes from its owner and his classmates.

The notes are addressed to “dearest Archie,” likely referring to Archie McAdoo, who was involved in many of the school’s activities. According to the Senior Statistics page, Archie was a part of the Debate Club, Student Council, Band, and Cheerleading, among other clubs. He was also voted “Most Musical” and “Most Ingenuous.” 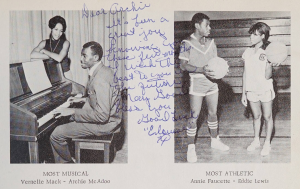 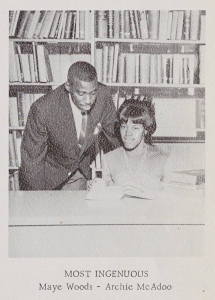 Many of the messages left by classmates cover huge swaths of the pages, including a few inscriptions that cover entire pages. Clearly, Archie was well-loved.

Click here to see the full 1968 Bulldog. For more from the Orange County Public Library, visit their partner page or their website.

Some of the newly-added editions have wonderful examples of the experimental yearbook artistry that rose to popularity in the 1960s-’70s. The 1970 edition of The Pirate, for example, showcases hand-drawn comics for the beginnings of some sections: 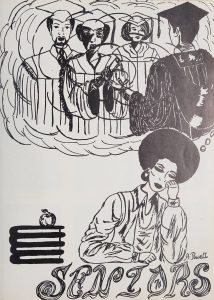 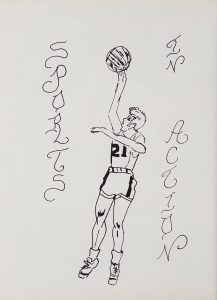 These drawings certainly depict another side to student life than posed school portraits, which tend to be more formulaic. Similarly, the 1969 edition of The Palmerite has similar section openers, though the artist chose a more abstract style: 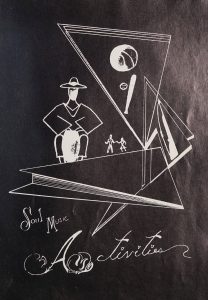 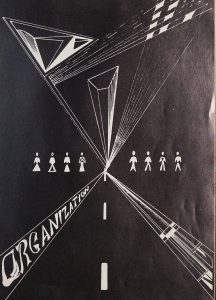 To see more original student art from the Palmer Memorial Institute, check out all of the yearbooks we’ve added:

You can see all yearbooks from Palmer Memorial Institute here. To learn more about the Charlotte Hawkins Brown Museum, visit their website or their partner page.

Tonight (Saturday, April 2, 2022), for the first time ever, Duke University and UNC-Chapel Hill’s storied basketball teams will meet in the NCAA Final Four.  It is being heralded as one of the most exciting games in sports…ever.  And the Governor of North Carolina, Roy Cooper, an avid basketball fan himself (and UNC grad), has declared North Carolina to be the center of the college basketball universe.  Those of us who live and work on Tobacco Road already knew that to be true, but it’s nice to have an official proclamation.

In light of all this, as one of the few places where Duke and UNC [materials] come together, we thought we’d take a look back at the first game between these two great basketball programs as described by the teams’ fellow students on the newspaper and yearbook staffs.  On January 24, 1920, Duke (then Trinity College), took on UNC at Trinity in Durham and UNC won, 36-25. 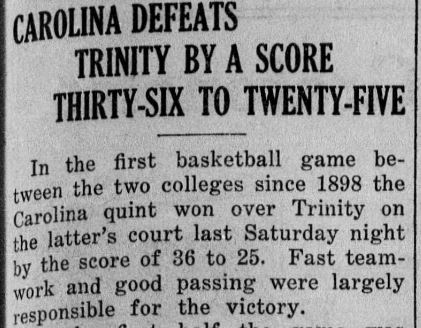 Trinity College’s Chronicle staff had a bit of a different take on that particular game; the staff felt very strongly that it was a result of a “jinx” that Carolina won, not a better team.  After all, they then went on to beat State College (NCSU). 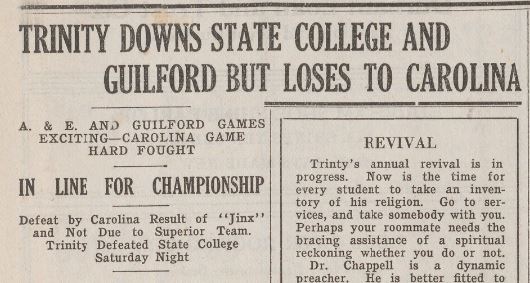 The yearbooks from each school also comment on the first matchup in their basketball features. Trinity’s yearbook added a note that will sound a bit too familiar to 2022 ears – their season was almost ended before it started due to the flu epidemic.

Trinity’s Chanticleer staff felt it was a surprise to everyone – even UNC! – that UNC beat them:

UNC takes a different tack, describing their win not as a surprise versus Trinity but as the result of a lot of hard work at the gym: 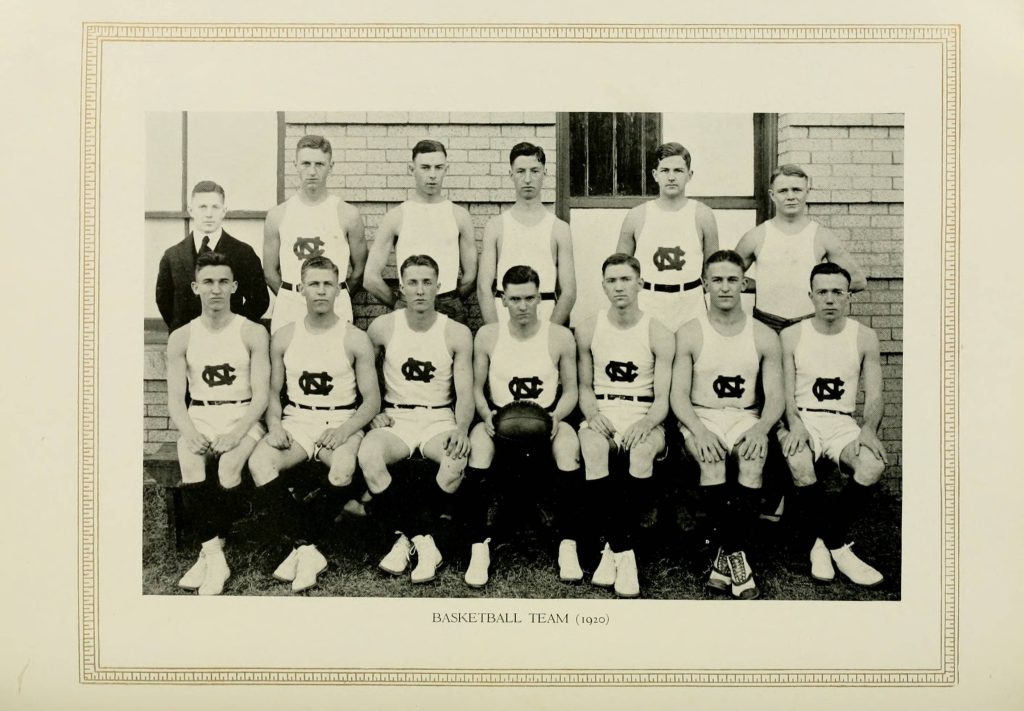 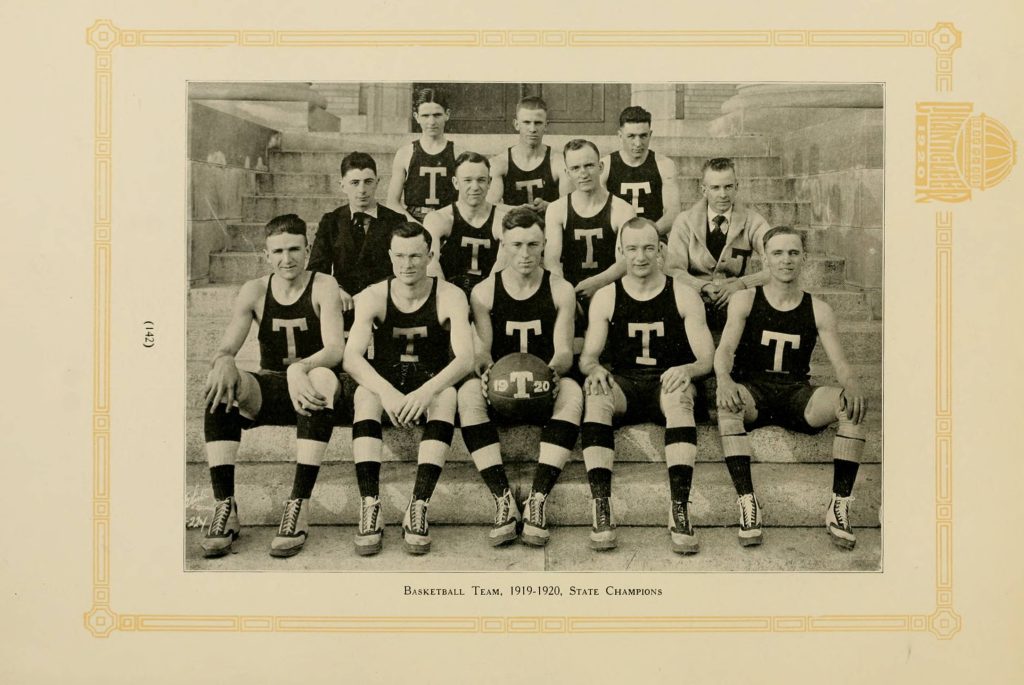 We’ll see what the matchup looks like tonight and inevitably, the resulting hot takes, 102 years later!

If you want to check out more UNC and Duke content on DigitalNC, check out their partner pages.  UNC is here and Duke’s is here.

Thanks to our partner Granville County Public Library, we’ve added several yearbooks from Oxford, N.C. and Mebane, N.C., as well as a few maps, to our digital collection.

This map of North Carolina, called “An Outdoor and Tourist Guide to North Carolina,” was probably created to lure visitors to our brand-new parks; the text alongside it reads, “State Parks in North Carolina are still under development, and at present accommodations and facilities are not completed, except at Fort Macon State Park, Carteret County.” It also lists R. Bruce Etheridge as the director of the Department of Conservation and Development (he served from 1933-1949). 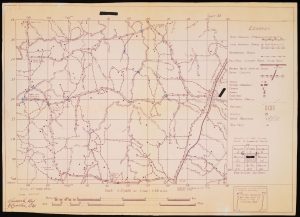 A map of an army plot in Granville County from 1943

Another notable addition is this army map, supposedly used to train troops to read French maps during World War II. Although it shows an area of Granville County near Mountain Creek Church, most of the text is in French.

The other maps show different versions of Henderson, N.C. (one from 1882). They also note the major roads and land owners. 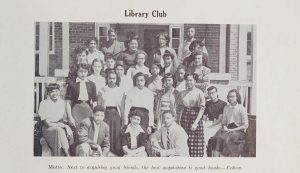 Students in the Library Club at Mary Potter High School, 1953

The other two yearbooks are from Bingham School (Mebane, N.C.) from 1908 and Oxford College, 1921. To see our full collection of North Carolina yearbooks, click here. To see all materials from the Granville County Public library, visit their partner page. 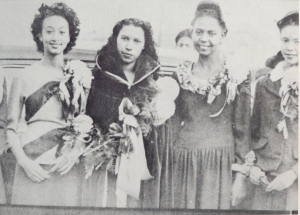 Two yearbooks from Washington High School in Raleigh, N.C. have been added to our site thanks to our partner, the Olivia Raney Local History Library. One is a standard edition of The Echo from 1943; the other is a special edition, The Echo Nostalgic Reflections, from 1977. 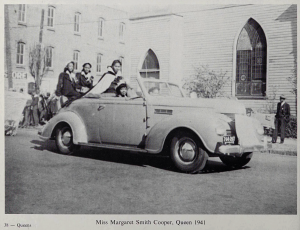 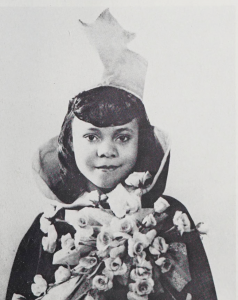 Next to the homecoming spreads are photos from the alumni dance (1976), as well as championship game information from the school’s football program.

Curiously, there doesn’t seem to be any information about who succeeded Mildred McKay as homecoming queen in 1943 in The Echo—school events seem to have been a lower priority for the yearbook’s editors than academics, clubs, and favorite poems.

You can see all yearbooks from Washington High School here. To find out more about Olivia Raney Local History Library, visit their partner page or the Wake County website.

Thanks to our partner, Alamance County Public Libraries, batches containing various materials such as the 1938 Eli Whitney High School yearbook, Walter M. Crabtree daybook, and a 1922-1924 copy of The Credit Guide are now available on our website here and here.

The Credit Guide was originally a resource used by loaners to check if an individual was trustworthy enough to pay them back. Essentially, the guide functioned as a physical credit history checker, but instead of having credit score numbers individuals received labels such as prompt pay, fair pay, slow pay, and considered honest but unfortunate circumstances prevented paying me. Today, the guide is a gold mine for those looking for information on people in cities located in or near Alamance County. The Credit Guide not only includes an indication of how likely someone is to pay back their loan, but also an individual’s name, occupation, and address. 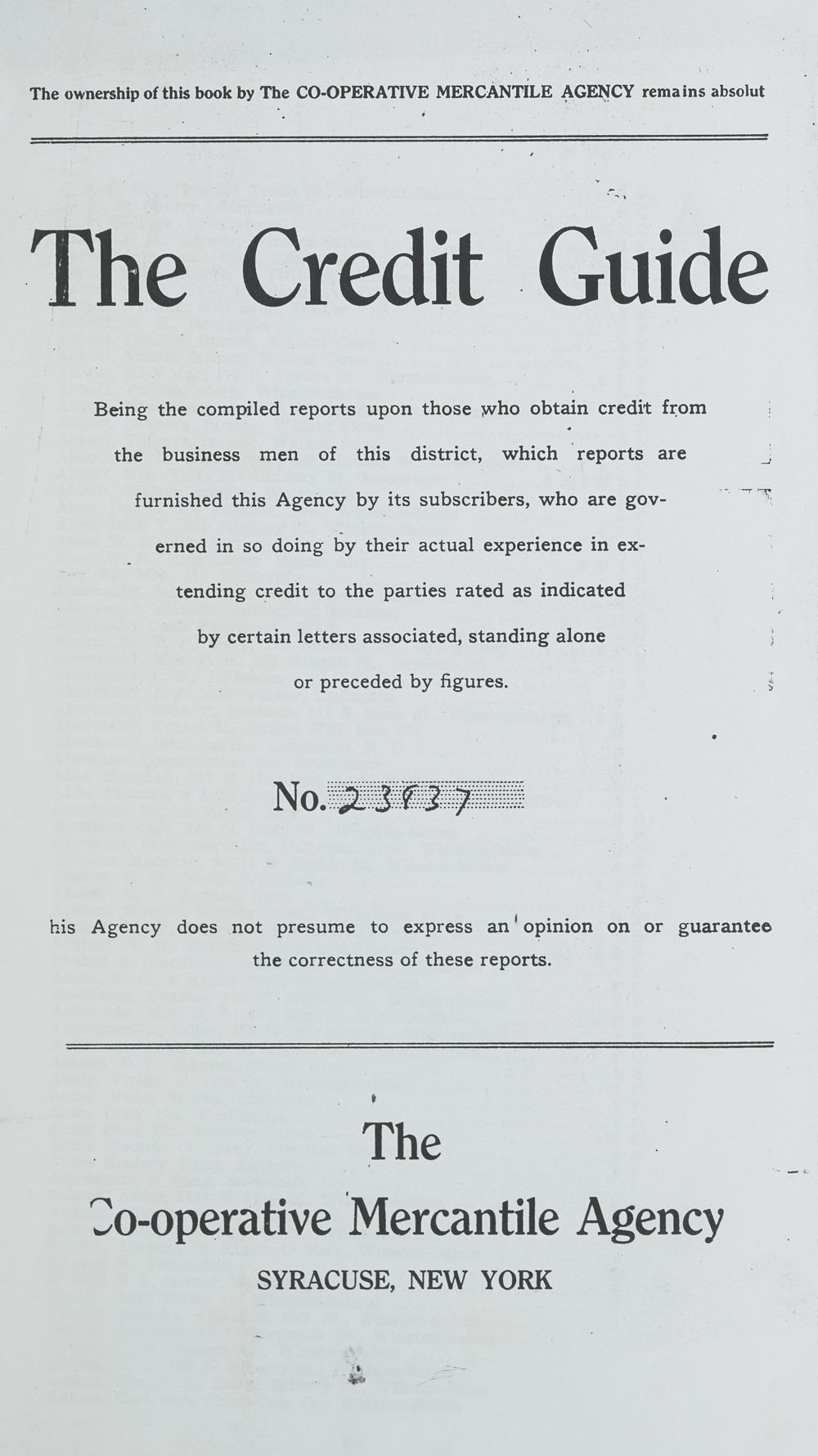 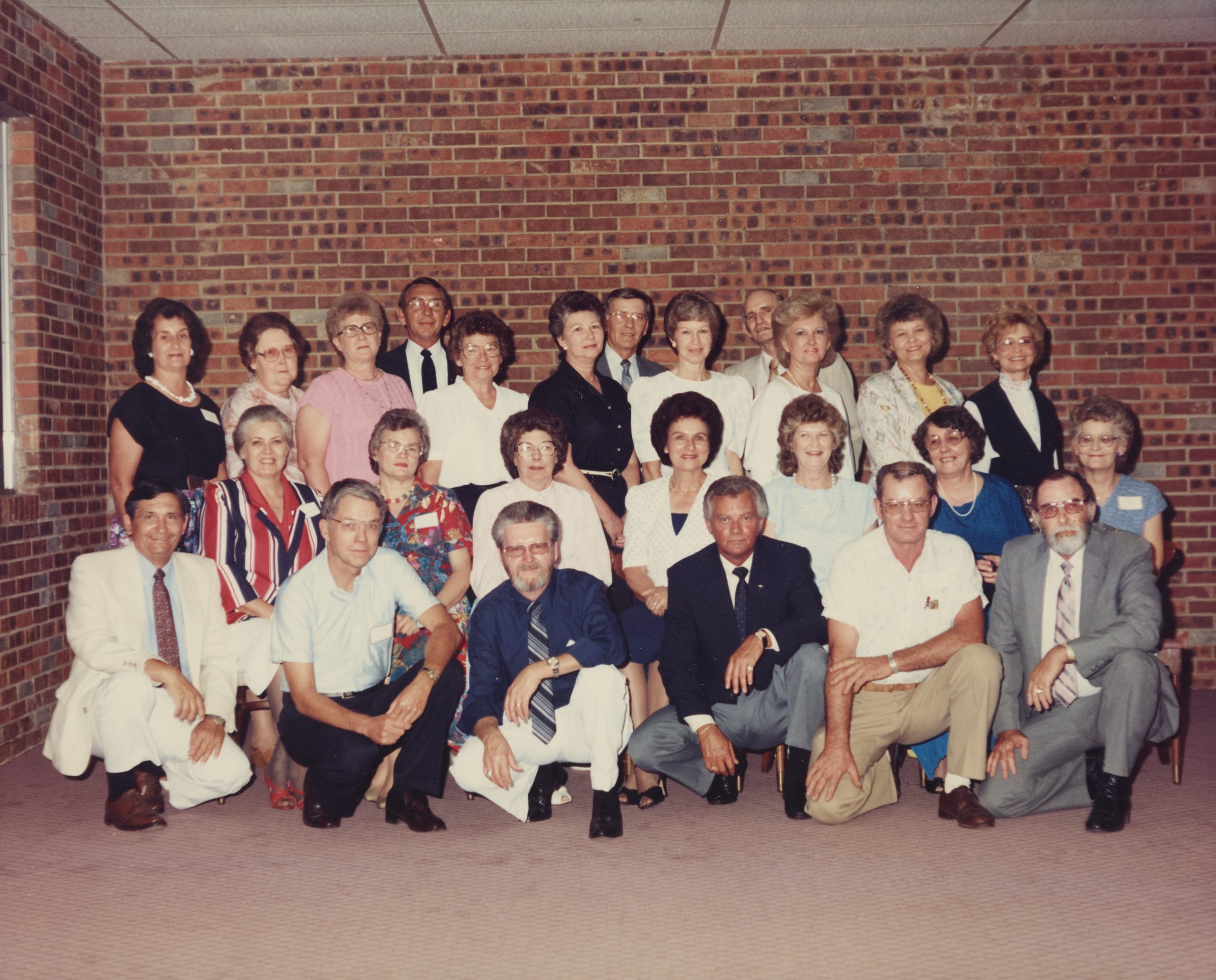 For more yearbooks from across North Carolina, visit our yearbook collection here.