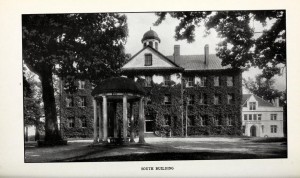 The University Records from 1901-1940 are now available on DigitalNC.  The University Record was a UNC publication that reported on various aspects of the University. There are annual reports on each of the schools of UNC–their enrollment, course catalogs, and other information–as well as reports on current research, Commencement programs, and general promotional materials about UNC. One of the annual publications is the President’s Report, in which the current University president describes the events of the past year and plans for the year to come.  These reports can shed light on important debates that were happening on campus in the first half of the 20th century.

For example, in 1918, the debate surrounding the admission of women to the university was of such importance that the Chairman of the Faculty, M.H. Stacy (President Graham had died earlier in the year), closed his President’s Report with an inspiring call for the university to adapt to the times and make full provisions for the female students. He includes a letter from Mrs. T. W. Lingle, the Adviser to Women, who calls upon the university to seriously attend to the matter. “To continue to admit them in a half-hearted way, and to furnish them with classroom instruction without the other features which make up the all-round college life, is a rather doubtful kindness to them,” she writes, and Chairman Stacy recommends the expedient construction of a women’s building. 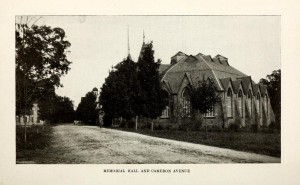 So was this women’s building ever constructed? The following year’s Report does not include any mention of women at all. Chairman Stacy, who had so fervently supported this women’s building, died of influenza, and Mrs. T. W. Lingle, Adviser to Women, had resigned (Mrs. M. H. Stacy, presumably Chairman Stacy’s wife, was appointed the new Adviser to Women). Though the 1919 Report discusses at length the remarkable increase in enrolled students, the fate of female students is unknown.