In following with our collaboration with newspapers.com, we have another large batch of newspapers this week! These images were originally digitized a number of years ago in a partnership with Newspapers.com. That project focused on scanning microfilmed papers published before 1923 held by the North Carolina Collection in Wilson Special Collections Library. While you can currently search all of those pre-1923 issues on Newspapers.com, over the next year we will also make them available in our newspaper database as well. This will allow you to search that content alongside the 2 million pages already on our site – all completely open access and free to use.

This week we have over 5,000 issues of The Wilmington Morning Star. The paper was founded in 1867 by former Confederate Major William H. Bernard and played a role in stoking the Wilmington Massacre of 1898. In November of 1898 a biracial government was legitimately elected in Wilmington, which the paper claimed to be fraudulent. Earlier that year, Daily Record editor, Alexander Manly, published an article proposing that it was possible for white women to be attracted to black men. The Morning Star found this to be “vile and slanderous” and riled a mob of angry white supremacists to burn down the paper’s office then claim that they had not started the violence. The following clippings are from November 9, 10, and 11. The day before the massacre, the day of, and the day after. 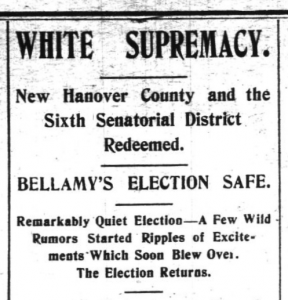 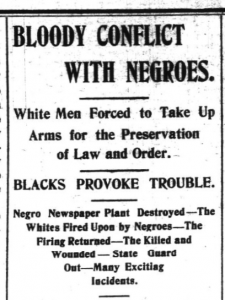 Here are the rest of this week’s additions:

Last summer we hosted students from a middle school in Wilmington who did extensive research on the 1898 riots in Wilmington.  They came along with staff from the Cape Fear Museum, who brought the issues of the Wilmington Daily Record the museum held.  We scanned those newspapers on site, along with clippings from papers around the state and country with articles about the riots.  To learn more about their visit, read the post we did about it during the summer during the summer here.

This fall, as a continuing part of our work with this group, we were pleased to make available 16 newspapers published in Wilmington during the 19th century, ranging in dates from 1803 to 1901.  Some of the papers have several years of content available and several have just an issue or two.  But together, they paint a rich picture of what life in Wilmington looked like during the 1800s and the wide variety of political viewpoints that were held in the city, and North Carolina as a whole.  The papers shed light on a port town that was instrumental in the Civil War and in the politics of Reconstruction afterwards, which culminated in the infamous riots of 1898.

The news in Wilmington, as told in the Cape Fear Herald, published on Nov. 4, 1803

The sixteen papers now available are:

View other newspapers on DigitalNC here.

About six months ago we asked our partners to help us increase the diversity of voices shared on DigitalNC. We had an outpouring of interest, and partners have shared a number of rich collections from the African American and LGBTQ communities. Here’s an update of what has been added to DigitalNC as a result of this call. 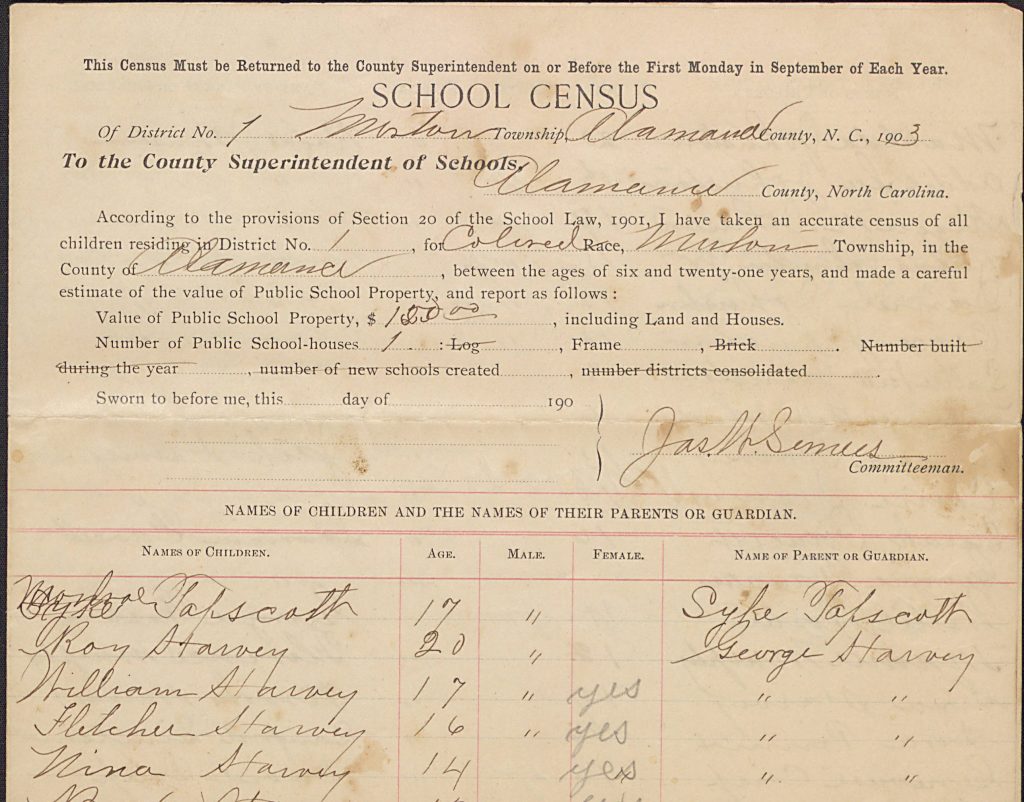 This 1903 Census Report for Morton Township, Alamance County, lists names, ages, and the names of parents of African American students.

We’ve also been working with University of North Carolina at Charlotte to share issues of Q-Notes, which covers updates, events, and issues of the LGBTQ community.

Diversifying DigitalNC isn’t a one-time event – it’s ongoing every day. If your institution has or will be targeting collections that document racial, ethnic, or geographic communities who are underrepresented on DigitalNC, and you’re interested in sharing these materials online, get in touch. 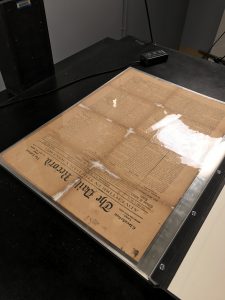 In July, the North Carolina Digital Heritage Center was pleased to welcome a group of middle school students from Williston Middle School and Friends School Of Wilmington. With them were writers Joel Finsel and John Jeremiah Sullivan and staff from the Cape Fear Museum, all of whom worked with the students over the past semester.  This visit was the culmination of a project for the students who had studied the Wilmington riots of 1898 and worked specifically with original copies of the Daily Record, held by the Cape Fear Museum.

Original issues of the Record, which was the Black-owned newspaper in Wilmington in the late 1890s, are incredibly hard to find: their offices were destroyed during the riots.  (Learn more about the riots on NCpedia.)  The museum staff brought along their copies of the paper, as well as original copies of the reaction to the riots as found in both Black-owned and white-owned papers across the country.  We scanned all of the materials on site with help from UNC-Chapel Hill Libraries’ Digital Production Center staff. Students watched and got to learn more about our work.  Now all of those materials are online not only for future students to work with, but for anyone from the general public to access. 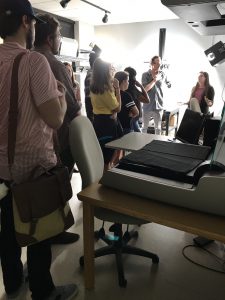 To learn more about the students’ work, read this great article from the Wilmington Star News . As the article states: “The project is still looking for any more copies of the Record that might turn up… Anyone who finds one is urged to email dailyrecordproject@gmail.com.”

And to view more newspapers on our site, visit our newspaper site here.