This week we have another 24 titles up on DigitalNC, including one of the state’s oldest papers: The State Gazette of North-Carolina!

The State Gazette was founded by Abraham Hodge and Andrew Blanchard in 1785. Hodge, born 1755 in the colony of New York, worked as a patriot printer during the American Revolution and even operated George Washington’s traveling press at Valley Forge in 1778. While stationed there, he printed official orders, commissions, and recruitment posters for the Continental Army. Seeking a warmer climate after the war, Hodge relocated to Halifax, N.C., where he would go on to own printing presses in Edenton, Halifax, Fayetteville, and New Bern. In addition to newspapers, he was named printer of the North Carolina General Assembly and printed the state’s laws in 1786. He was also one of the first people to contribute to the library of The University of North Carolina. 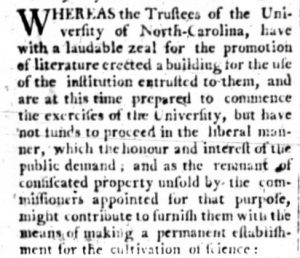 March 5, 1795 issue of The State Gazette of North-Carolina. Less than a month after The University of North Carolina opened its doors to students.