Headline in the Roanoke News, May 28, 1908 From the Halifax County Library

94 years ago today, on January 17, 1920, the United States officially became a dry country, as the 18th Amendment banning the sale, production, importation, and transportation of alcoholic beverages went into effect.  However, in North Carolina, it had little effect as the state had enacted prohibition via a referendum vote twelve years earlier on May 26, 1908, becoming the first in the south to ban alcohol. 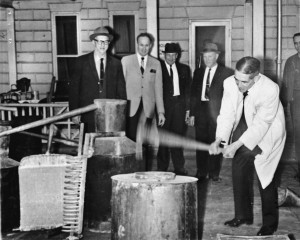 Prior to the full country being under Prohibition, North Carolinians would drive to Virginia or South Carolina to procure their alcohol and bootlegging quickly became good business in the state and those early bootleggers who fixed up their cars to be as fast as possible laid the ground for race car driving and eventually, NASCAR.  Once full prohibition was in effect across the country, moonshiners also did quick business.  In DigitalNC there are several photographs and newspaper articles about those who were caught by police attempting to make or transport liquor and many more expressing editorial opinions for and against prohibition. 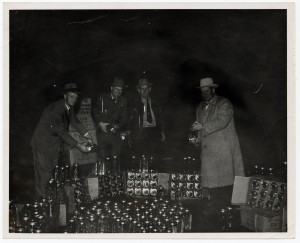 While nationwide prohibition ended with the 21st Amendment’s passage in 1933, North Carolina did not ratify the amendment and it was not until 1937 when the Alcohol Beverage Control (ABC) system was set up in North Carolina counties to sell alcohol that prohibition officially ended in North Carolina. However, many counties still remained dry well after 1937 and post prohibition moon-shining and bootlegging was still a common occurrence in the mid 1900s.  Today, Graham County remains as the only fully dry county in the state.  To learn more about prohibition in North Carolina, check out this post from the North Carolina Collection and this article in NCpedia. 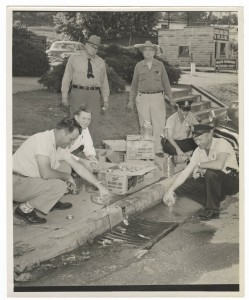 Officers in Spray pour illegal whiskey down the storm drain in the 1950s. From Rockingham Community College

← The Cloudbuster Newspaper on DigitalNC