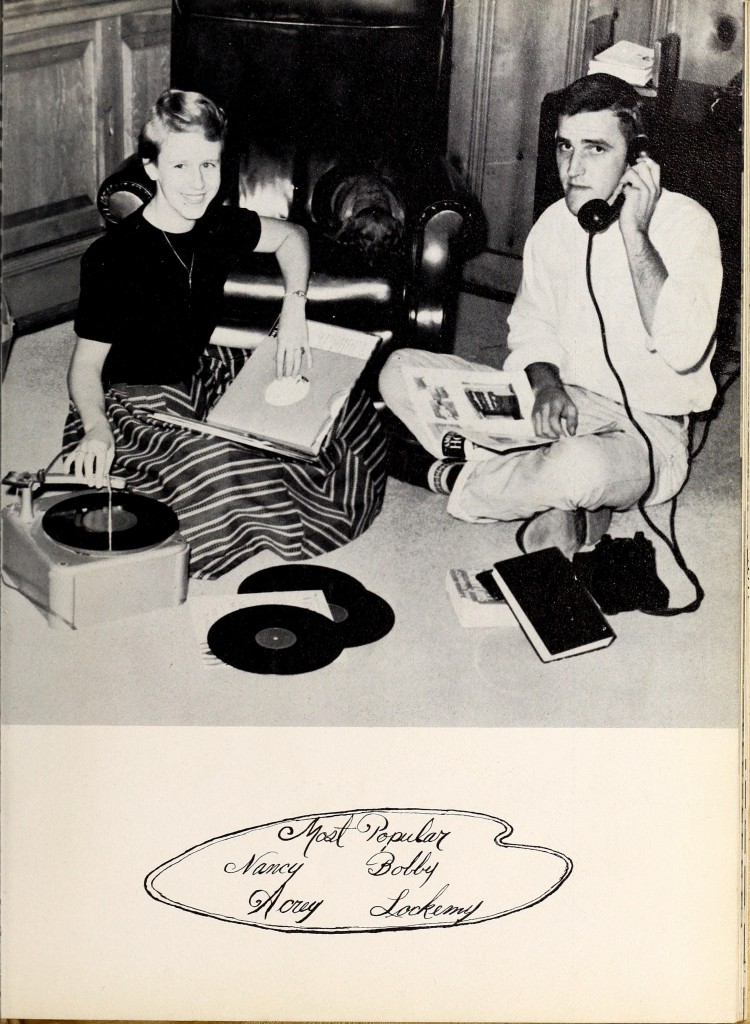 Granville County Public Library has contributed yearbooks and some manuscript volumes to DigitalNC, including the first yearbook on the site from Warren county.

You can view all of Granville County Public Library’s content on DigitalNC.

Several scrapbooks from Granville County Public Library are now available on digitalnc.org. They are divided into three sets, all indexed by last name and organized by date: 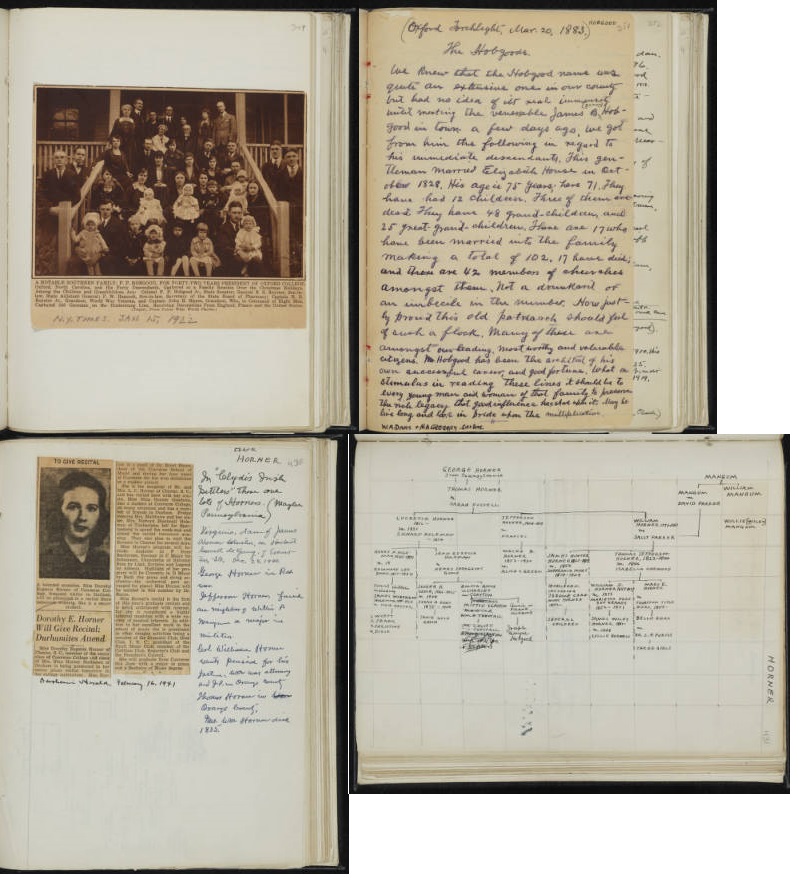 Families of Granville County – Hobgood & Horner from the F-H Volume 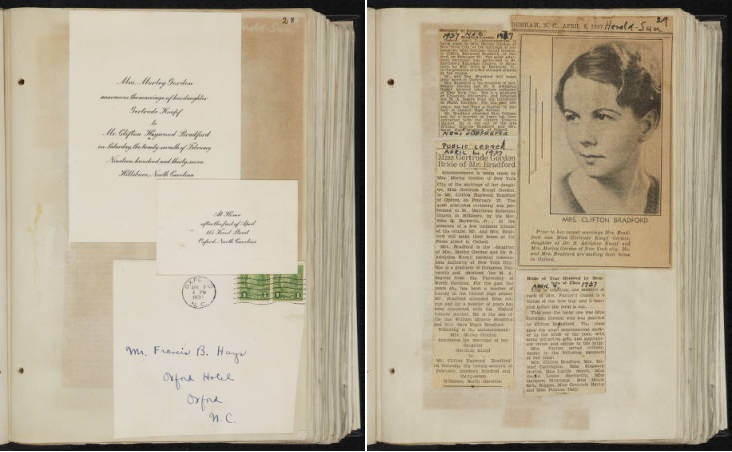 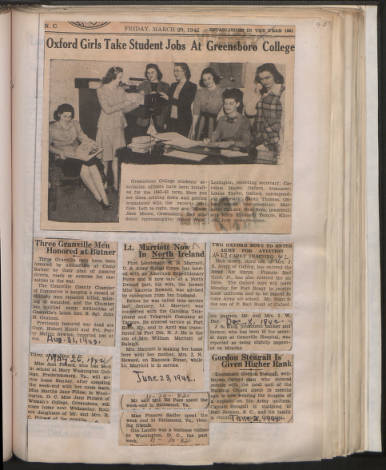 From Oxford and Granville Men and Women, vol. 3

These scrapbooks belong to the larger Hays Collection, a many volume collection of Oxford and Granville County histories created by Francis B. Hays over the course of more than 75 years. 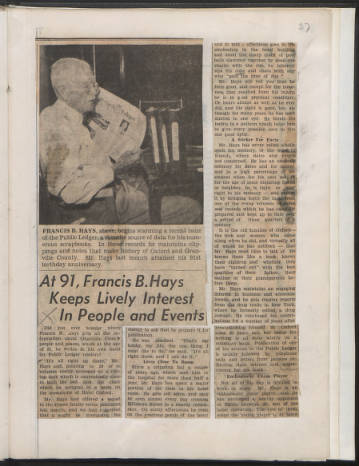 Article about Mr. Francis B. Hays in Oxford and Granville Men & Women, vol. 7

The last several pages of Oxford and Granville Men and Women, vol. 7 feature articles about Mr. Hays. Written in 1958, when Mr. Hays was 91 years old, these articles explain his process and philosophy behind gathering all of this information and organizing it into these volumes, and discuss — among other things — Mr. Hays’ love for chess, his past as an editor and druggist, and his history of helping school children and “Granville’s migrants” in history projects and genealogical inquiries.  In addition to these articles is an article by Mr. Hays called “It was News in 1911.”

These materials are part of an ongoing digitization project. More volumes to come!

Yearbooks from several high schools in Granville County are now available online in the North Carolina High School Yearbooks digital collection. There are 54 volumes online, ranging in date from 1899 to 1962. The yearbooks are from the collections of the Granville County Public Library in Oxford. The following schools are included:

This week we have another 60 titles up on DigitalNC! While these papers cover all of North Carolina, almost one third are from Statesville alone!

In the October 3rd, 1902 issue of Elizabeth City’s Tar Heel, there is an interview with Reginald Aubrey Fessenden’s assistant, Professor Saint Marie. Fessenden was a pioneer in early radio, or “wireless telegraphy,” and was conducting experiments at Manteo on Roanoke Island. In the interview, Prof. Saint Marie seems somewhat pessimistic about the process and its possibilities, which might be due to Fessenden abruptly ending their contract with the Weather Bureau the previous month after conflict arose over ownership of the patent. 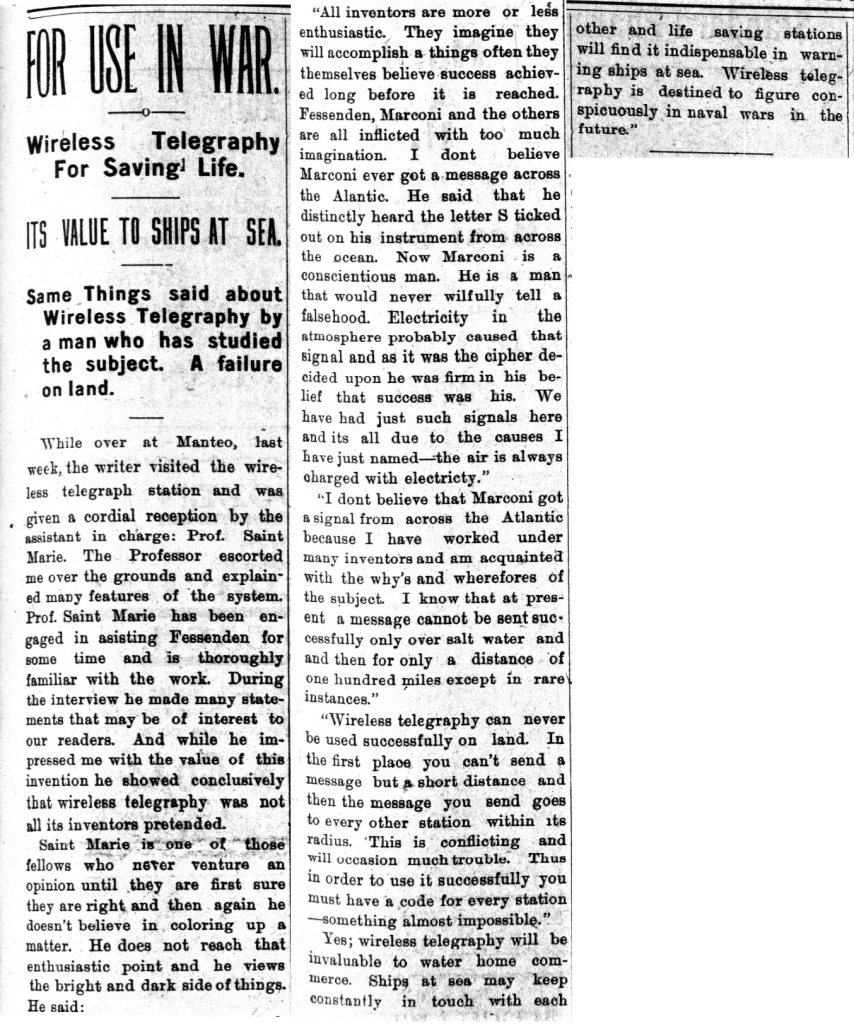 However, less than two months later The News and Observer reported that Fessenden’s invention had greatly improved and could now send transmissions to Washington, D.C. On Christmas Eve, 1906, he conducted the first radio broadcast by reading a bible verse and then playing ‘O Holy Night’ on his violin for the ships off the coast of Massachusetts. By 1909, according the the Charlotte Evening Observer, he had perfected the process for which he laid the foundation on the Carolina coast. 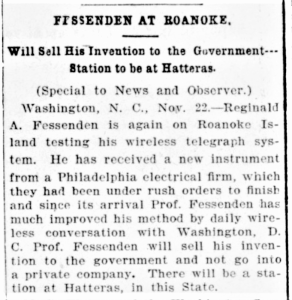 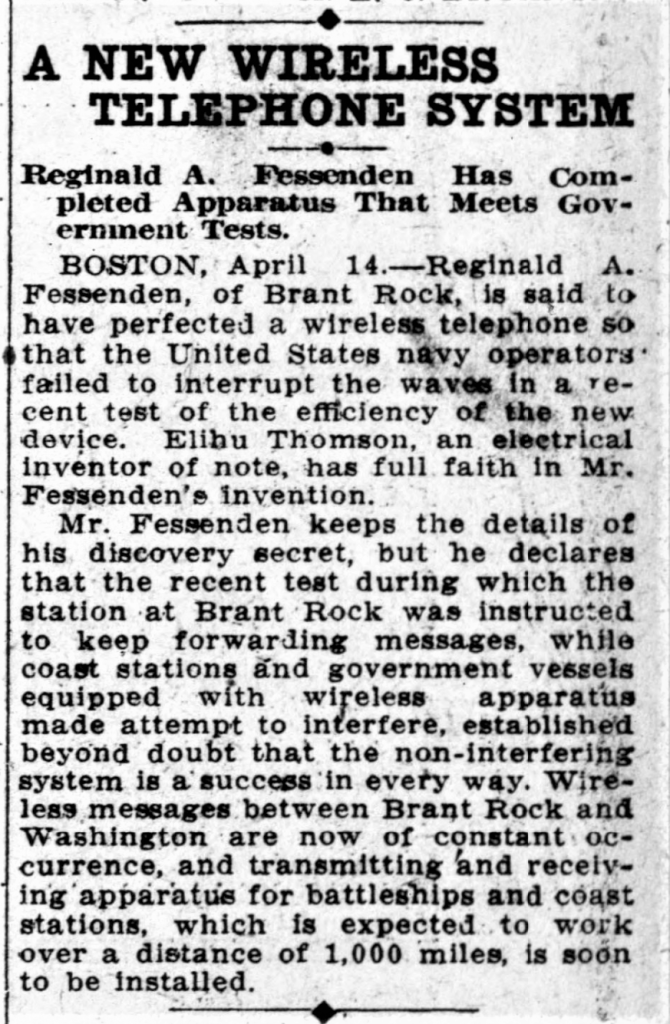 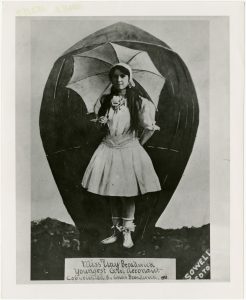 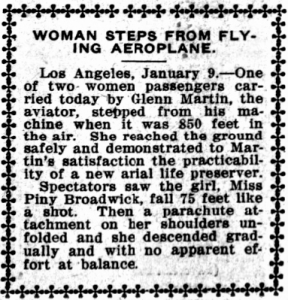 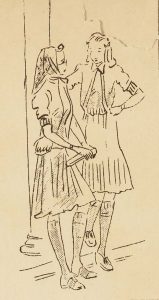 Some say that high school student humor is a bit sophomoric; as evidence to the contrary, we’ve uploaded several student newspapers (thanks to our partner, the Granville County Public Library) that will at least make you smile.

First up are a couple of jokes from the Oxford High School Student Paper, The Owl. These jokes are from their “This n’ That” section of the March 13, 1941 issue. 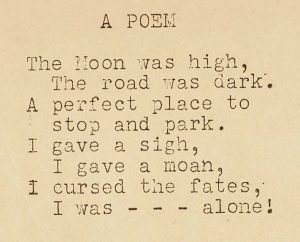 This section also includes some stellar student profiles. One “Sophisticated Senior” lists her favorite pastime as “flirting” and her hobby as “catching beau.” A “Silly Sophomore” prefers to spend her time “eating” and aspires to be a “Bulls’ Eye Egg thrower.” 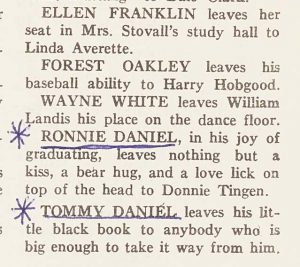 For a bit of darker humor, the 1967 senior class of J. F. Webb High School ran an extended graduation joke in the form of a “Last Will and Testament,” describing what each person left behind to an underclassman.

Items I and II leave “appreciation,” “respect,” and “esteem” to the principal and teachers. Item III leaves “old books,” “battered lockers,” and some hangout spot called “The Cave” to the student body in general. Item IV is where things start to get personal.

Many students opted for the “I leave my book, ‘How to Get Girls to Like You,’ to my friend Tommy” joke. A few, like Ellen Franklin and Wayne White, left treasured spots. Ronnie Daniel seems to be the only one who bequeathed a “kiss, bear hug, and a love lick on the top of his head.” 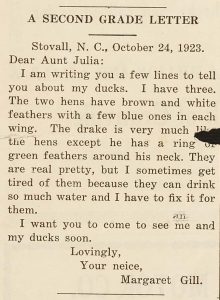 In Stovall High School’s paper, The Breeze, the back page is covered in  miscellany briefs, including “A Second Grade Letter” by Margaret Gill. Even though Margaret didn’t seem to find it funny that her ducks drink so much water, it’s certainly entertaining to read. 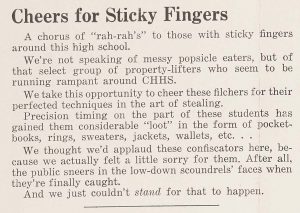 This 1958 issue of Chapel Hill High School’s Proconian didn’t have the established humor section of some previous issues, though it did have a sassy note commenting on current affairs.

The full list of added newspapers (some by students and some for the community) includes:

To see more materials from the Granville County Public Library, visit their partner page or their website. You can browse all newspapers in our North Carolina Newspapers collection.

Thanks to our partner, Granville County Public Library, five yearbook issues from 1957 to 1962 are now available on our website. This batch adds Polkton High School to our list of schools with available yearbooks and expands on our holdings of Middleburg and Jefferson High School. Featured in the yearbooks is a look into education in the northern part of the state including the various clubs and sports offered at each school and photographs of fun school events. 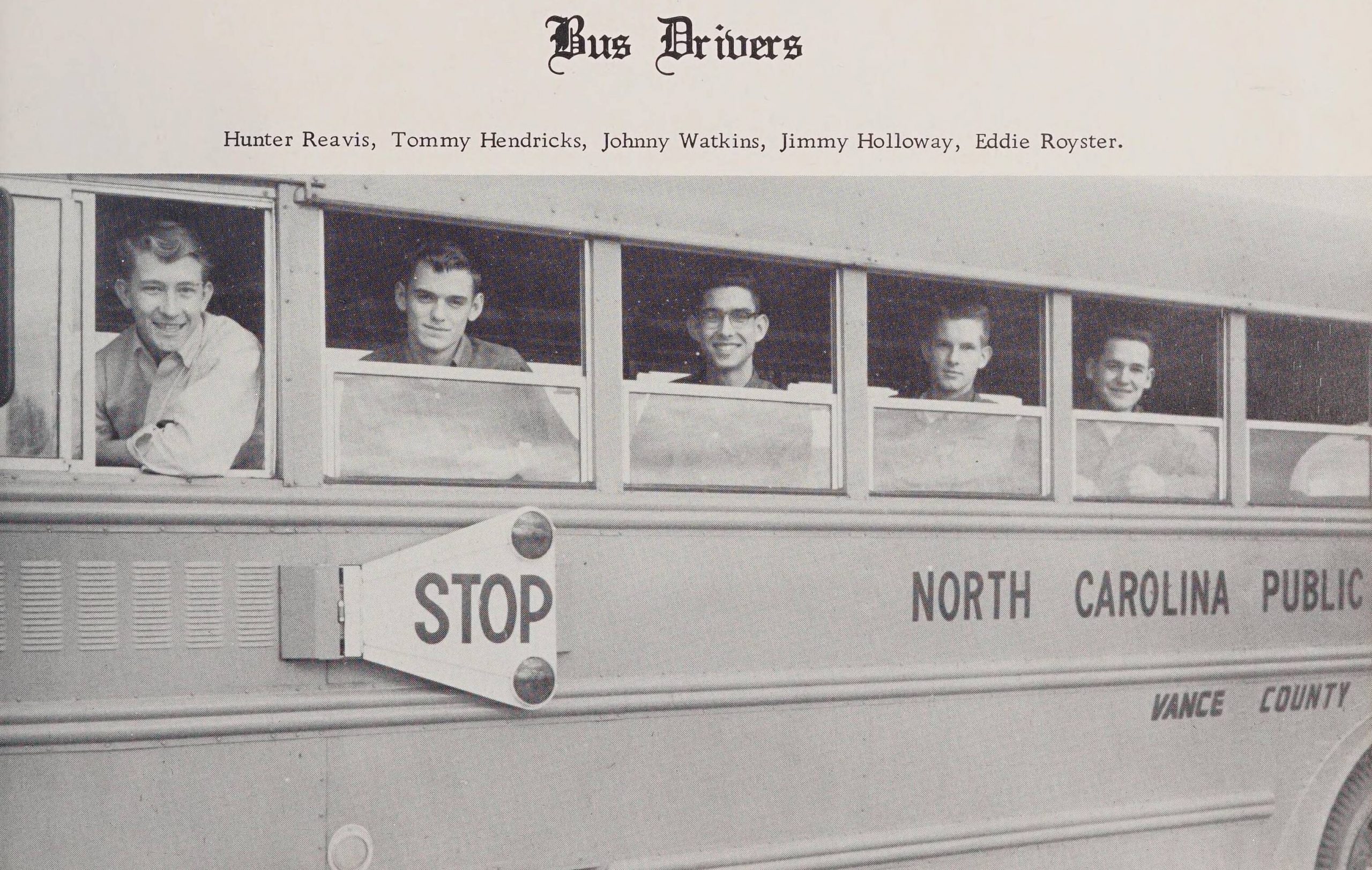 The book Contributions of Vance County People of Color by Ruth Anita Hawkins Hughes is now available on DigitalNC.  Thanks to a request from a community member, the folks at Granville County Public Library, and UNC Libraries, we were able to digitize this book. 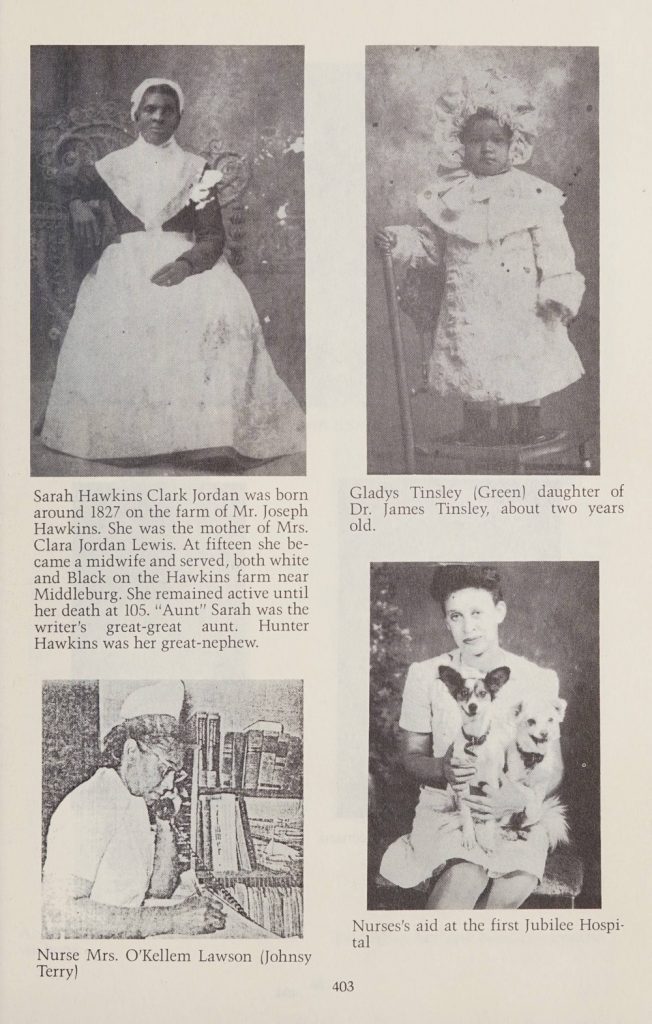 Photographs of people discussed in the book are included

Written in 1988, the book contains vignettes about many Black residents of Vance County during the 20th century.  The book is broken up into chapters about farm families, and town families, and then by different occupations in the county.  An amazing resource particularly for genealogists, Contributions… is full text searchable, making it easy to search names quickly!

To view more materials about the Black community in North Carolina, visit our African American newspapers collection and our general collection here. To learn more about our partner the Granville County Public Library, visit their partner page here or their website here. To browse yearbooks from across North Carolina, click here. Photos of different buildings by Mrs. Addie Wood. The church (top right) was built in 1754.

Volumes 135 through 140 of the Francis B. Hays Collection of scrapbooks from Granville County Public Library are now up on DigitalNC. These scrapbooks add to the extensive collection of volumes compiled by Mr. Hays, an avid local historian from the Granville area. Each scrapbook contains a wealth of information relating to a specific subject, and many contain notes and letters written by Mr. Hays himself. This batch of scrapbooks focuses mainly on family genealogies. 1957 letter addressed to Francis B. Hays. Letter to Mr. Hays about ancestral information on the Duty family.

Volume 135 is the church book for Granville Circuit, including rolls of congregants dating back to 1836. Also included are the church programs for Oxford Methodist Church in Oxford, NC from September 1941 to June 1942. Volumes 136 through 140 are various genealogies for local families, including information on family records, marriages, newspaper clippings, and photographs dating back to the 17th century. Also included are various personal letters to Mr. Hays.

For more scrapbooks compiled by Francis B. Hays, you can visit the DigitalNC page for the Francis B. Hays Collection or view our previous blog posts on the collection. You can also see more materials from the Granville County Public Library partner page.