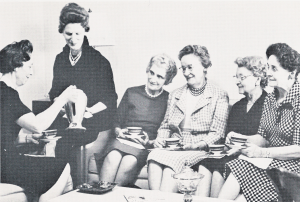 When Wake Forest College (now Wake Forest University) started admitting women in 1942, they decided that female students would need their own set of rules about conduct. Now, thanks to our latest batch of materials from ZSR Library at WFU, it’s easy to see what those rules were. As you might expect from a once Baptist institution, many of them clash against contemporary student life; for instance, women were almost never allowed to have a car on campus, and drinking alcohol was punishable by suspension or expulsion.

But beyond some of these more predictable rules are several that depict a campus that would be almost unrecognizable to students today. Here are some of the silliest examples from 1945-1971 (all of which the author of this post, a 2019 alumna, is happy to have avoided).

Presumably, this is about the noise of typewriter keyboards keeping other students awake, but it also serves as a reminder that academic all-nighters haven’t always been the norm.

You would have to know which of the ladies in the photo above was in charge of your dorm and ask for permission. This was also true for things like visitors, day trips, and coming home late.

3. Sometimes you may receive an unexpected caller or phone call in the parlor when you are not properly dressed. On these occasions you should slip into a raincoat and a pair of shoes before going out into the parlor. And if your hair is in rollers be sure to put on a scarf. (1965-66)

A classic problem with an undeniably specific solution.

4. The identification card is not replaced under any circumstances, even if it is lost, stolen, or destroyed through no fault of the student. (1955-56)

This would probably send a chill through many of today’s demon deacons. I would wager that the number of today’s students who keep up with their student ID from freshman orientation through graduation is in the single digits.

5. It’s a College rule that participating in or inciting a riot (and this includes panty raids) is subject to penalty. (1965-66)

A true window into campus culture.

Some contemporary students may find themselves asking romantic partners to define the relationship. If only the student handbook would lay it out so clearly, as it did in 1970.

There’s only one phone in the dorm, and everyone wants to use it. 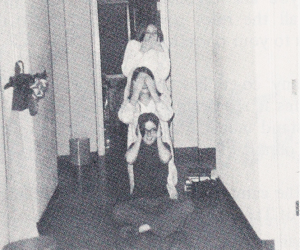 Three students from the 1970-71 handbook

Although students who make their bed every morning by 10:30 a.m. are probably more common than students who keep up with their ID for four years, the numbers still aren’t looking great.

9. The giving and receiving of affection is a very personal thing and something you do not want to cheapen by making a spectacle of yourself. (1968-69)

This sounds more like free advice, but the entry goes on to detail what constitutes public affection (anything that makes other people uncomfortable) and a structure of punishment for each offense.

10. Bermudas may not be worn at all on the campus, to classes, cafeteria, soda shop, movies in town, eating establishments, down town shopping, in the formal parlor, or while sitting in the small parlor entertaining, or out the front door to go to the gym. (1960-61)

Strangely, this rule seems to hold—if only because Bermuda shorts for women aren’t the fashion force that they once were or because very few students are still going out to soda shops.

How better to represent your school when galivanting around the capital?

For more details about how the young women of Wake Forest presented themselves in this period, you can look at the full batch of women’s handbooks (and, if you’re so inclined, compare them with the general student handbooks for male students). More materials from Wake Forest University can be found on their partner page and their website.

News From Washington Enlivens Our Latest Title From Maxton, N.C. →