Thanks to our partner, Elon University, we’ve added another newspaper title to our Newspapers of North Carolina collection. The Christian Sun has been published around the state and elsewhere, including Hillsborough, N.C., Pittsboro, N.C., Raleigh, N.C., and Suffolk, V.A. This batch of issues ranges from 1844-1908, covering the Antebellum, Civil War, and Reconstruction eras.

Although this paper comes from one of the most turbulent times of our nation, the publishers seem less interested in breaking news than in spiritual musings and agriculture. On the front page of the October 18, 1861 issue (six months after the beginning of the war), you can read stories like, “The Christian’s Harvest,” “Fate of Those Who Reject the Gospel,” “Farm and Garden: Value of a Shelter for Sheep,” and the exciting “Efforts of Chloroform on Bees.”

A few stories on the front page do make reference to the war, such as “Good for the Thirsty Soldier,” which recommends staying hydrated on long marches with cold coffee. “After a meal,” the article says, “take the coffee grounds, boil them over again, and pour off into your canteen and let it cool for your next march. It is not only nutritive and stimulating, but it will quench the thirst more effectually than water.” 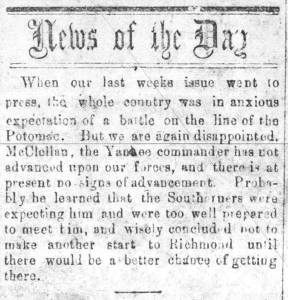 You’ll have to go deeper into the issue to find more detailed news about the battles, though the briefs aren’t what we’d think of as “objective” journalism by today’s standards.

“Probably [McClellan] learned that the Southerners were expecting him and were too well prepared to meet him,” the article boasts.

Perhaps because of the religious leanings of the paper, some of the best articles are completely detached from the timely “news” that contemporary readers are used to; take this pseudo-anarchical argument entitled, “Evils of Creeds. Their Origin.” from September 24, 1851, for example. This article is a bookend to an ongoing series on “Christian union” from the preceding issues, and it summarizes the conclusion that sin, the cause of division within the branches of Protestantism, is also the underlying force of human laws.

To see even more articles on Christian union, the war, and life in the South during this period, you can look at all issue of The Christian Sun here. You can also explore other titles in our Newspapers of North Carolina collection. To see more materials from Elon University, visit their partner page and their website.