Thanks to our partner the Alleghany County Public Library, we’ve added several early issues of the Alleghany Times to our Newspapers of North Carolina collection. The issues range from 1933 to 1947 and include local news from Sparta, N.C., as well as some national stories.

One notable front page story is from the February 16, 1933 edition. Right in the center, a headline reads, “Bank of Sparta Robbed of $1,500; Yeggs Enter Through Door of Cellar.” (Apparently, a yegg is a “safecracker or robber.”) 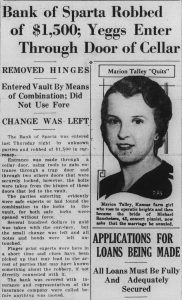 The article goes on to describe how the crooks removed the hinges of the cellar door to enter the safe and used either code-cracking skills or prior knowledge of the safe’s combination to get to the gold.

Strangely, of equal newsworthiness (based on its placement on the front page) was the story of Marion Talley separating from her first husband, Michael Raucheisen (whose name doesn’t appear in the biography linked above because, apparently, the marriage was annulled after a few months).

And, perhaps even more

surprisingly, both of these articles appear above an article detailing an assassination attempt on then-President-elect Franklin D. Roosevelt.

The article describes Roosevelt arriving in Miami on a ship, fresh off a cruise through the Bahamas, when Guisseppi Zingara, a brick-maker, fires shots from a pistol at him. Although the President-elect wasn’t hurt, Anton Cermak, then-Mayor of Chicago, was “shot through the body.”

To see all materials from the Alleghany County Public Library (including more papers), you can visit their partner page or take a look at their website.