By now, you’re probably convinced of the charm and hilarity unique to high school student newspapers⁠—but if you aren’t, it’s time for you to take a look at our latest batch of the Grimsley High School Student Newspaper, High Life from our partner the Greensboro History Museum.

One of the things that makes this newspaper unique is the annual April Fools’ Day issue, often called Low Life. Low Life’s pages are filled with scandalous, outrageous, and non-sensical stories—all of which, presumably, are untrue. Take this article from the 2000 issue, for example: 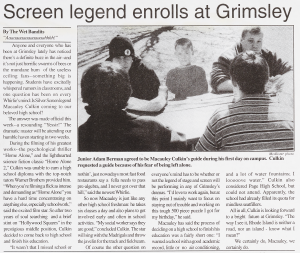 In case it’s unclear, that’s a photo of young Macauley Culkin Photoshopped to be sitting at a table of Grimsley students.

This article describes actor Macauley Culkin’s transfer to Grimsley High (he would have been 20 years old in 2000). In addition to Culkin’s fabricated quotes and bon mots, what shines through here is the caption under the doctored photo: “Junior Adam Berman agreed to be Macauley Culkin’s guide during his first day on campus. Culkin requested a guide because of his fear of being left alone.”

The general trend, it seems, is that the issues become even less tethered to reality in recent years. Here’s one article from 2012 that really turned up the free association dial (from the “.74 ferrets” section, of course):

Another great thing about Low Life is the staff’s attention to detail. On most issues, the section headings and dates have been changed (mostly to nonsense), and even the author bylines are jokes. The staff box from the April 1, 2000 issue is a punny example: 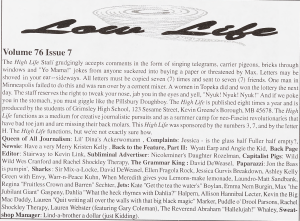 “The High Life functions, but we’re not exactly sure how.”

Some of the highlights embedded in here are “Back to the Feature, Part II,” “Stairway to Kevin,” and the request to receive any inquiries or complaints by carrier pigeon. The staff is also divided into the Sharks and Jets (West Side Story-style), featuring Sir Mix-a-Locke, Kate “Get the tea, the water’s” Boylan, and Dahlia “What the heck rhymes with Dahlia?” Halpern.

Something that really captures the spirit of Low Life (especially its more recent iterations) is this crossword from 2005. At least it gives you a fair warning about what it is. 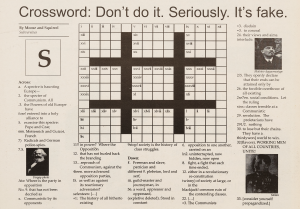 The added issues of High Life (and Low Life) can all be found in our Newspapers of North Carolina collection under Grimsley High School Student Newspapers. These issues span from 1974-75 and 1990-2013. To see more from Greensboro History Museum, you can visit their partner page or their website.