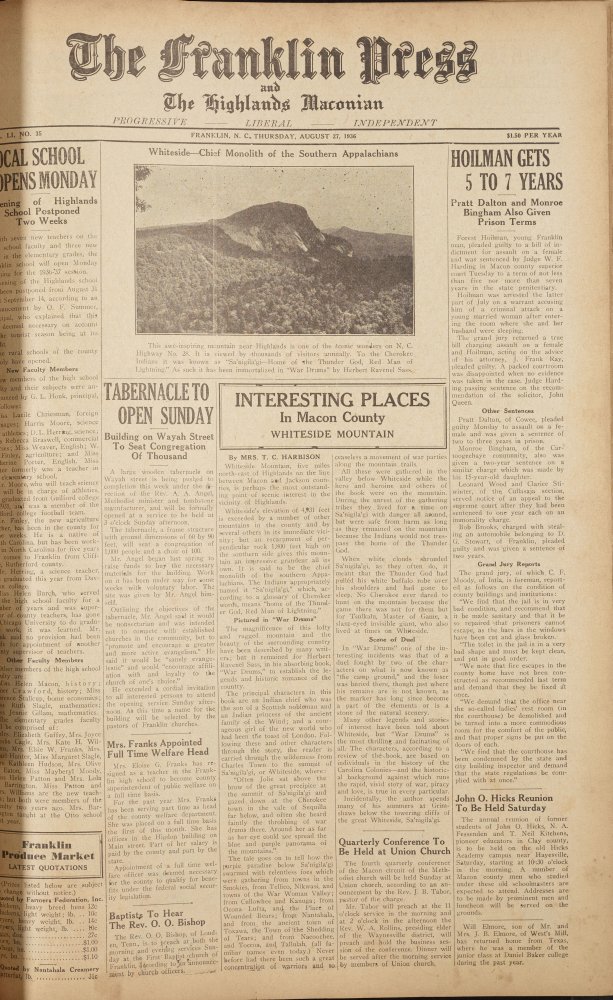 August 27, 1936 issue of The Franklin Press and Highlands Maconian, page 1

Earlier this year, the Highlands Historical Society approached us and asked us if we’d like to help “fill in” a year of The Franklin Press and Highlands Maconian newspaper. Most of this paper is available on microfilm that was created by one of our favorite partners, the State Archives of North Carolina; in fact, we had digitized 1924-1942 (excepting 1936) with the help of the Fontana Regional Library. The Highlands Historical Society came to us with a bound volume of the missing year, a volume full of print copies they’d never seen elsewhere. These have been added to DigitalNC.

In 1936, the U.S. waited to see the fate of the man who had kidnapped and murdered Charles Lindbergh’s child. Franklin Roosevelt was reelected. The summer Olympics were held in Berlin, under the eye of then Chancellor Adolf Hitler. All of these were covered by the Press, right next to local news of Macon County. We especially like “Interesting Places in Macon County,” a regular column by Mrs. T. C. Harbison that talks about local landmarks. An issue with this column is shown at right, talking about Whiteside Mountain.

You can browse all issues of The Franklin Press and Highlands Maconian in our Newspapers collection. We’ve also helped the Highlands Historical Society share a number of yearbooks and local newspapers online, which you can see and search through their contributor page.