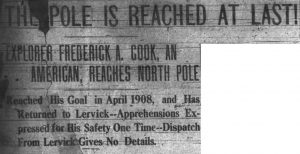 A front page headline from September 2, 1909 celebrates Frederick A. Cook’s trip to the North Pole and subsequent return to Lervik, Norway.

Issues of the Washington Daily News, contributed by the George H. and Laura E. Brown Library, are now available on DigitalNC. The Washington Daily News is a newspaper published six days a week, that started in 1909. The 1,441 issues now available digitally, span 1909-1914. The paper focuses on news from Washington, a small city located in Beaufort County, North Carolina, but also includes news as from the nation as a whole. While front-page headlines tend to tackle breaking stories from the American South, the United States, and beyond, shorter pieces recount municipal issues, meetings, social gatherings, and more. 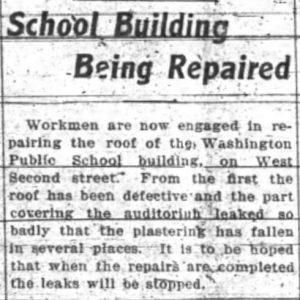 A brief update on the repair of a local school in the September 3, 1909 issue.

The Washington Daily News still exists in both print and online form, and in 1990 the paper won a Pulitzer Prize for Public Service for a series of articles exploring and exposing water contamination in Washington, North Carolina.

To learn more about the George H. and Laura E. Brown Library, visit their partner page, or take a look at their website.

The Roxboro Courier from our newest partner, the Person County Public Library →