I was poking around in the newspapers on our site looking for mentions of “Mickey Mouse” (it’s his birthday today) and did a double-take when I noticed the headline above. Dance marathons? Yes. Running marathons? Of course. Rocking chair marathons? Do tell. 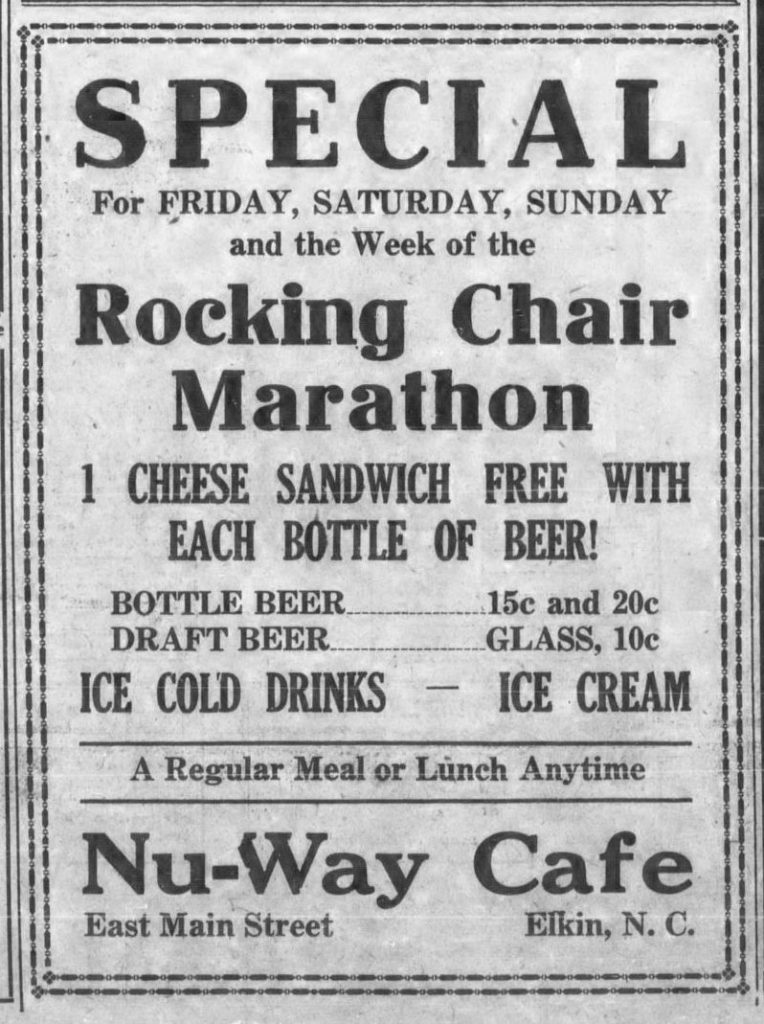 Elkin, NC (Wilkes County) held a rocking chair marathon in June of 1933, billed as the “second of its kind” in one issue and the “first of its kind” in another*. Contestants had to keep their chairs rocking 50 minutes out of every hour, 24 hours per day, for as long as possible. The last person standing (swaying?) and the runner-up would each receive a portion of the gross receipts from the minimal admission price charged to spectators.

This event featured a new entertainment each evening, including Garley Foster “the human bird,” a “Mickey Mouse” circus on a tiny stage, a baby bathing beauty contest, and all sorts of exhibits. Master of ceremonies was Lippincott the Magician. Area businesses capitalized on the festivities, offering specials like the one mentioned at right (a free cheese sandwich with each bottle of beer)!

The rockers (mostly men and boys, along with a single woman) were still going strong after more than 48 hours, and the organizers decided to extend the festivities until all but one were eliminated. I really regret to inform you that I couldn’t find out who won the contest. I didn’t see any follow-up in any of the adjacent Elkin newspaper issues. If anyone has any ideas regarding where I might dig up such a small detail about 1930s Elkin, please let me know!